In the eyes of a Homeland Security agent today, a faux-leather suitcase packed with curious things might be an object of suspicion. For Marcel Duchamp (1887-1968), it was simply art. And it was a “portable museum” — à la traveling salesman — in which he could carry his life’s work. Duchamp, who enjoyed challenging the conventions of the art world, made his first “Boîte-en-valise,” or “Box in a Valise,” in 1941. In it were miniature replicas, photographs and color reproductions of 80 of his works, including the once-scandalous urinal, titled “Fountain” (1917). The Frenchman, a hugely influential artist of the 20th century, spent years creating some 300 iterations of “Boîte-en-valise.”

The Hood Museum of Art at Dartmouth College has just acquired one of them.

Museum director Michael R. Taylor could not be more pleased. At the helm since last August, he came to the Hood from the Philadelphia Museum of Art, which houses an enormous Duchamp collection. Taylor’s expertise is in modern and contemporary art, with a particular focus on Dadaism and Surrealism; he has authored an award-winning book on Duchamp. So you believe it when he says of this “Boîte”: “I’ve been a Duchamp scholar for 20 years, and this is the best one I’ve ever seen.”

Taylor notes that all 300 valises are still extant, to scholars’ knowledge; though some are in private hands, most are in museums. “For an edition of that size, you’d think they would be ubiquitous, but they’re not,” he says.

The Hood’s valise is on view through August 26, after which it will be put away until a display with softer and less damaging illumination can be created as part of an upcoming museum expansion.

Why exactly did Duchamp create these valises? That’s been the subject of much discussion, points out the Hood’s essay announcing the acquisition. “One hypothesis is that Duchamp was humorously commenting on his meager artistic output,” it reads. “Unlike Pablo Picasso and Henri Matisse, who created a prodigious number of works of art, Duchamp had deliberately limited his artistic production.”

Taylor adds: “What he argued is that he didn’t want to repeat himself, and claimed that even great artists only have four or five good ideas.”

Possibly the “Boîte” allowed Duchamp to do something with his earlier work in a new way, posits Taylor, who pronounces the work “brilliant.”

The essay further notes that Duchamp’s “self-deprecating joke” allowed him “to proudly claim that his oeuvre was so small that he could fit it in a small suitcase.” The miniaturization of his works was consistent with Duchamp’s belief that no piece of art was sacred, and that “the idea behind an art object was more important than the object itself.”

That sensibility, and his use of replication and appropriation, set the artistic stage for future generations of artists. “The Flux people loved the Box,” says Taylor, referring to a DIY, anticommercial movement in the 1960s. He points out that the Hood owns a “very large collection of Fluxus,” including so-called Fluxkits. These are boxes containing, for example, printed cards, games, ideas and miscellany. Speaking of boxes, it’s worth noting that one of Duchamp’s assistants for creating his “Boîte” editions was Joseph Cornell, now considered a pioneer of assemblage.

The Hood’s valise joins a previous Duchamp acquisition: an edition of “The White Box,” which “is filled with notes related to ‘The Large Glass,’ a painting [aka ‘The Bride Stripped Bare by Her Bachelors, Even’] about nine feet tall, in Philadelphia,” says Taylor. In a collection of 70,000 items, Duchamp’s contributions are sure to stand out — even in miniature. 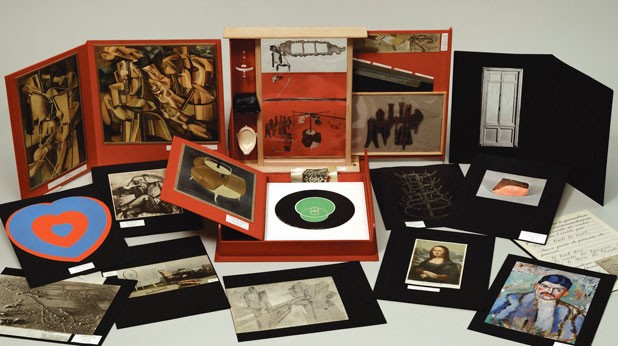