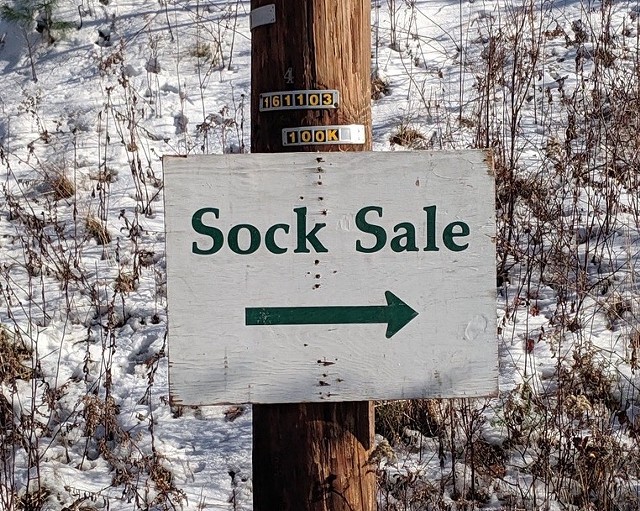 For nearly 20 years, many Vermonters’ mid-November traditions have included a trek to the Darn Tough factory’s sock sale in Northfield, a celebrated annual event where Vermonters could buy the coveted footwear for a fraction of the regular retail price.

But in 2020, in the first fall of the pandemic, Darn Tough canceled its sock sale, citing safety. Last year, it canceled it again. And this year, to the dismay of sock lovers around the state, the company has put the kibosh on the sale once again. Darn Touch cites COVID-19 safety as its primary reason, but many members of the public aren’t buying it.

“Makes you wonder if they are selling their ‘seconds’ to places like Amazon at a smaller discount than the annual sale to the public in order to make up for lost sales over the Pandemic??” one disgruntled Facebook user said.

“Going to a sock sale wouldn’t kill anyone!!” another said. “They are just promoting a political agenda and some folks are all too happy to jump on board.”

Not so, said Courtney Laggner, Darn Tough’s brand and community market manager. Laggner is from Plainfield and knows the cancellation is a hot topic, especially among central Vermonters who relied on it for their holiday shopping.

But she said the company was keeping many of its COVID-19 protocols in place to protect its workers.  The sock sale — where hundreds of people would line up outside the Northfield factory for a chance to peruse the tables of socks indoors — would not make sense.

“People are sad,” Laggner said. “People were really sad for 2020, people understood in 2021, and people in 2022 seem to be a little bit angry that we are choosing to keep our employees safe from the risk of illness right before the holidays.”

The sock sale started in 1979, when the company was known as Cabot Hosiery Mills. Back then, owner Marc Cabot made workaday socks of ragg wool. In 2004, after the mill nearly went bankrupt, Marc’s son Ric started Darn Tough, a company that has grown quickly to sell millions of premium-priced wool socks made at a factory in Northfield and another in Waterbury. Father and son are co-owners.

The sock sale is a chance for locals who take home Vermont-level salaries to find discounts on socks that usually retail for around $25 a pair. Judy Emmons of Barre said she has frequented the sale for nearly 20 years.

“My family is now addicted to these socks, and they don’t wear anything else,” Emmons said, citing the quality of the wool and the attention to detail that keeps socks from slumping during the day.

“They don’t have the elastic at the top that starts riding down, so you have a huge pile of sock in your shoe,” Emmons said. “If you’re hiking, they don’t cause blisters, and the padding is nice, too.”

About 12,000 people attended the last four-day sock sale, in 2019, Laggner said. In lieu of the sale over the last few years, Darn Tough has increased its donations to homeless shelters, schools and other groups; Laggner said about 20 requests for donations arrive every day from all over the U.S.

Laggner said the sale will return. Company staff enjoy a chance to show off the factory and its elaborate knitting machines and to meet customers, she said.

“That’s our plan,” Laggner said. “We miss it, too. We are deeply committed to Vermont, and we call Northfield 'the sock capital of the world.'”

Emmons said the sock sale — usually held to coincide with the start of deer hunting season in Vermont — has lately been the talk among her colleagues at National Life, the Montpelier insurance company.

“I had to go out and buy them this year on my own,” she said.