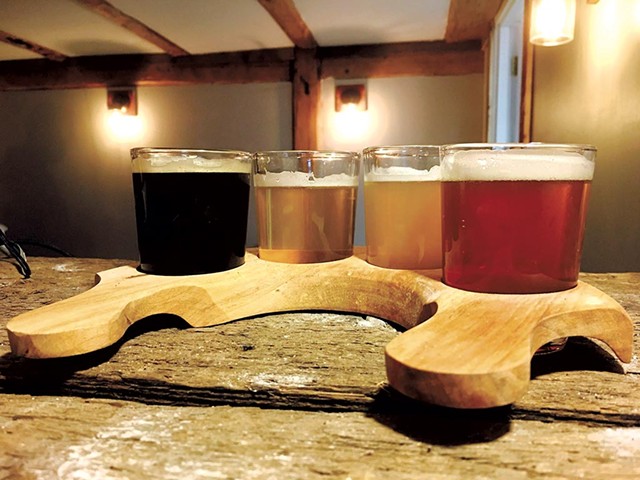 Near the intersection of routes 2 and 15 at Joe's Pond in West Danville, Keiser Pond Road traces a narrow dirt line southeast toward Peacham. Bear left at the fork onto Oneida Road, and within minutes you'll arrive at Red Barn Brewing, which quietly opened its tasting room to the public last Friday, June 3.

The one-barrel brewery is the work of Erin and Jeremy McMullen (owners of the barn) and friend-neighbors Judi and Peter McAlenney, the latter a longtime homebrewer.

Inside the historic post-and-beam building, beers flow from five draftlines in a barnwood-lined tasting room. Last weekend, one of them was a light-and-citrusy double extra pale ale made with blended Citra, Simcoe and Mosaic hops, which Peter McAlenney describes as "middle-of-the-road hoppy, not over the top like a lot of other Vermont beers." Another was a crisp and quaffable German-style Kölsch, which earned high marks at last year's Make the Cut homebrew competition.

Other brews included a lightweight porter, a hazy American pale ale, a malt-forward English ale, and a low-ABV Bavarian-style wheat beer with notes of banana and spice. Starting this week, Red Barn's owners plan to keep one homemade root beer or other nonalcoholic option on draft.

The brews are available for sampling and flights on-site, and in growlers and 32-ounce "bombers" to go. Assuming things go well, McAlenney says, he hopes to arrange for wholesale distribution, though the main goal is serving the local market. "We really wanted to provide something for the people [around] here," he says, "so they don't have to drive really far to get quality craft beer."

While last Friday's opening did draw a mostly local crowd, the brewer says plenty of passersby from afar managed to find the brewery on Saturday. "We had a lot of people from Boston and Burlington and beyond," McAlenney says. And that's part of his plan, too: "We want to be on any beer path that people are doing for the day. We're only a [couple] miles off of Route 2."