Dancing on Water: A Preview of 'The Quarry Project' 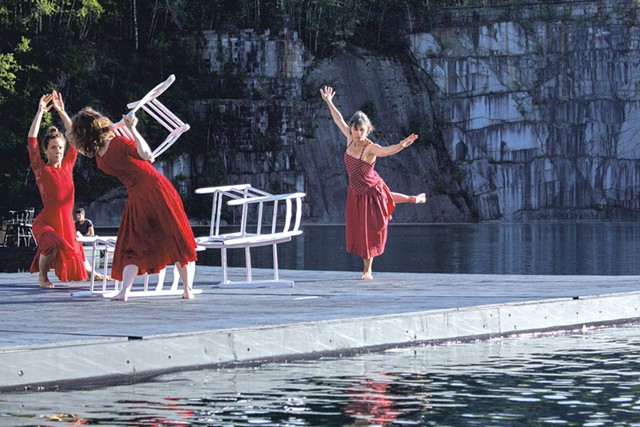 From behind a granite ledge in the far distance of a water-filled quarry, a floating stage appeared carrying dancers and musicians, who lay prone, dressed in gray. One by one, they stood and peeled off their shrouds, revealing costumes of bright red, orange, yellow and green. "This is the canvas on which we dance," a narrator said, standing with the audience and gesturing toward the quarry. "This hole is way too deep for an anchor, so let us let go."

These words and images marked the start of a late-August preview performance of Hannah Dennison's The Quarry Project. Now in its third year of development, the hourlong, site-specific dance and music piece takes place at the Wells Lamson Quarry in Websterville, a village in the town of Barre. On select evenings this year and last, Chelsea-based project director and producer Dennison invited the public to preview the work as she explored artistic and logistical choices. After further refinement, the finished work will premiere in August 2020.

Founding director of the nonprofit Cradle to Grave Arts, Dennison has been making community-focused dance works for Vermont stages and specific sites for more than 35 years. Most recently, she created Threads and Thresholds at the Kent Museum in Calais in 2015; and Dear Pina, a tribute to the late German choreographer Pina Bausch, at the Shelburne Farms Breeding Barn in 2012. A master at working with both trained and untrained dancers, Dennison builds collaborations with unexpected partners to perform works in arresting places.

The Wells Lamson Quarry is approximately 700 feet long, 400 feet wide and nearly 500 feet deep. One of the oldest and deepest quarries in the country, it was central to the Vermont granite industry until 1986, when it was retired, and the pumps that kept seeping water at bay were turned off. Within months, it filled with millions of gallons of water. For locals, the quarry has, in the ensuing years, come to represent hard work and pride, reverence and awe, heartache and loss.

In 2016, while seeking permission to use the quarry from its owner, Québec-based Polycor, Dennison sat for hours at the water's edge and often felt "overwhelmed with these feelings that were coming out of the quarry," she recalled. Her own "state of being" surely influenced her experience, she noted. But then, "Every summer I'd run into people who said, 'I watched some guy get thrown into the quarry by his angry wife' or 'Some little kid threw their ball in and then fell in,'" she added.

Through The Quarry Project, Dennison aims both to reflect the intensity of the site and to provide "a new way of looking at the quarry" for locals. "It's in their backyard. It's a liability ... Their uncle died in there — all these hard memories," Dennison said. Her project "doesn't erase the old memories, but it gives them a more magical look at something that is so familiar."

During the August preview, the 25 dancers and five musicians on the floating stage, powered by a small outboard motor, arrived at a collection of stages secured about 75 feet from the audience, which was seated on another floating platform at the shore. The performers disembarked and fanned out onto the seven stages, and then the stages themselves spread apart.

On one stage, an older couple wearing white and black sat contentedly, one reading a book and the other making origami. A window frame was suspended on two-by-fours behind them. On a larger stage, six men and women clad in orange and pink ran around at top speed and clattered metal cups on a picnic table like a boisterous family. A woman in yellow danced languidly around a bed frame on her own stage; six women in red gathered at one corner of a fourth stage, submerging it perilously in the water.

Watching the piece unfold was like being in a dream state, not only because the dance vocabulary was sometimes slow or even still, but also because there were so many stimuli to take in at once.

This reporter's attention was riveted by a green-costumed couple for a time, then drawn to women dancing around chair frames, then focused on the musicians' stage, which by this point had motored far out in the quarry. Another glance at the couple moments later revealed that everything in their dance had changed, inspiring thoughts such as How did that happen? What did I miss? Am I sure about what I saw before?

To say that the sensation was deliciously disorienting would be an understatement. Time slowed and nearly disappeared.

The gestural dance vocabulary — which Dennison created in collaboration with Montpelier-based yoga and somatics professional Amy LePage — and minimal set design invited viewers to "find their own way through it," Dennison said. Rather than emphasize a particular story or narrative, she crafted a work in which "the house is just a skeleton of a house, and the chairs are not functional as chairs ... and the bed is just the remains of the bed. But each of those set elements has a resonance for those who see them and have their own story connected with home or table or bed."

The "sonic environment," as Dennison called it, was equally subtle yet evocative. Composed for The Quarry Project by bandleader Andric Severance, the music combined spare percussion with major-chord melodies and minor-chord dissonance for solo and ensemble voice, accordion and flute. The occasional chirp from a nearby bird added serendipitous counterpoint, while echoes within the quarry amplified the music — and posed challenges for the musicians. In one sequence, for example, a percussionist relied on visual cues from Burlington dancer Hanna Satterlee to establish and maintain a steady tempo.

Creating a performance piece on water in a quarry has been anything but simple, Dennison emphasized. First, she tackled the legalities of the project, including taking out "a honking-big liability insurance policy," she lamented, and convincing Polycor president Patrick Perus to allow her to use the quarry.

"It's very original and creative, and it puts the quarry in a great light," Perus said of the project. "Hannah is persistent, so it was the easiest path to allow her to do it!"

The second challenge was technical: how to build and manage floating stages. A posse of carpenters, stage designers and local volunteers helped build the stages out of wood, plywood, wire and empty plastic buckets. Then they strung cables and pull ropes across the width of the quarry and attached small electric outboard motors to some stages.

The third challenge centered on emotion and safety. Dennison had originally planned to incorporate a lot of swimming in the piece. But she awoke from a dream of swimming halfway across the quarry with the realization that "I could have a panic attack and die," she recalled. "That's when the caution about how much we put our bodies in the water came into play. I had to pay attention to it because it's a force to be reckoned with."

In addition to fundraising for the project and making revisions over the next year, Dennison is seeking a large space in which to rehearse: about 70 by 100 feet. She has some leads but feels little urgency. The water has taught her patience, she said, recalling words spoken by the narrator at The Quarry Project preview: "The soft water changes the hard rock, slowly, in geologic time."