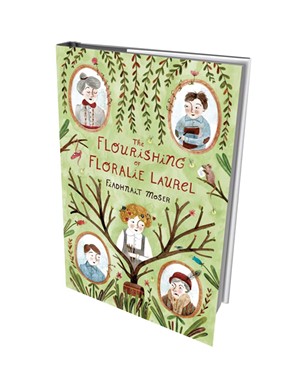 Burlington resident and dance instructor Fiadhnait Moser can claim another job title: novelist. Yellow Jacket, a new imprint from Little Bee Books, has published her children's book, The Flourishing of Floralie Laurel. Released last month and aimed at kids ages 10 to 14, the book is historical-magical realism. It follows young Floralie as she tries to uncover the truth behind her mother's disappearance. The discovery of a letter from her mother along with a hidden box of dried flowers prompts Floralie to embark on a quest to find her mom, using flowers as clues. The story was inspired by Moser's interests: floriography, the language of flowers; art, particularly Impressionism; and Monet's garden. "And I just tied it all together," she said. The 22-year-old owns the Fia Moser School of Dance in Shelburne. She has completed three other novels — look for one of them, The Serendipity of Flightless Things, in summer 2019 — and is working on two more. She writes mostly magical realism, she said, because she likes the way the genre allows her to tackle serious topics —alcoholism, mental illness and abuse show up in Floralie —in an approachable way. The reader can't always tell if an event occurs in reality, in a character's mind or is magic, she explained. As someone who wrote fan fiction, novels, short stories and poems as a child, Moser marvels at the sight of her book on store shelves. "It's really weird," she said. "It's what I've wanted since I was about 8 years old, so it's a dream come true."

The Flourishing of Floralie Laurel, by Fiadhnait Moser, Yellow Jacket, $16.99.