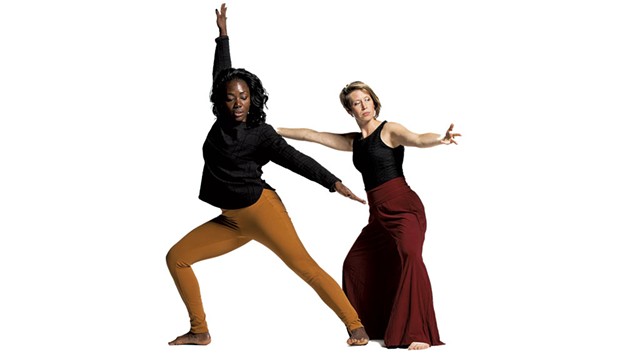 Christal Brown and Lida Winfield are friends and colleagues, and they're curious about each other: How are they similar? How are they different? Professionally, both are accomplished independent dance artists and faculty in the Middlebury College dance program. But Brown is also chief visioning officer of Steps & Stages Coaching, Facilitation, Consulting and the leader of the Middlebury College Anti-Racism Task Force. Winfield is also an independent educator; a creator of theater, storytelling and visual art; and an instructor in Middlebury's Educational Studies Program.

Their temperaments are similar: "We both work a lot and like our work," Winfield said, "and we're both talkers." But the women's backgrounds and life experiences are quite different. Brown grew up in the South and is Black; Winfield was raised in the North and is white.

"As children, Christal was considered a genius and Lida was labeled dumb," state the performance notes for a new dance video work that the duo has created to explore who they are.

Same but Different premieres online on Saturday, January 30, produced by the Flynn and created with support from the Middlebury Performing Arts Series and the National Performance Network.

"Our main goal is for the audience to see what it means to be curious about another person," Brown said in a recent interview with Winfield and Seven Days. It's "a human-to-human investigation of how we continue to know about ourselves by asking questions about each other."

The work is also about friendship, Winfield added: "Clearly that's something that's really needed" these days.

Through movement and spoken word, Brown and Winfield explore topics such as race, age and gender. For example, in a short rehearsal clip, they move between the center of a studio and its edges, exploring what it means to be marginalized.

"Many people may have seen me as marginalized," Brown said while explaining the clip, "but what I saw was that I could see the whole playing field, decide which position I wanted to take and play the game my way."

Winfield had a different perspective: "It doesn't always feel like that." In her experience, those on the margins aren't necessarily aware that they can gather information about themselves and those in the center and use it to their own advantage.

Though Same but Different offers commentary related to contemporary cultural issues, "It's not a response or a reaction to our current moment," Brown said. Seeds for the collaboration were sown in 2016 when she and Winfield taught at the Bates Dance Festival in Lewiston, Maine. Brown suggested they create the piece when she noticed that the two shared similar values.

Both believe dance is a vehicle for change and are not "so into [dance] that it becomes more important than the people," Brown said. We "place people first," Winfield concurred, by "valuing the people in the room, really teaching to who's there ... and [being] interested in deep transformation with the tool that dance is."

Already in the same safe pod during the pandemic, Brown and Winfield began creating the piece last summer in Brown's home studio. Inspiration came from improvised performances they gave at professional development workshops for educators, well before the coronavirus arrived in Vermont.

In these performances, educators in the audience would call out four words they wanted the duo to address, and Brown and Winfield would dance and converse using those words, on the spot, for seven minutes. (See their clever riff on the words "sunshine," "boys," "waffle" and "darkness" posted in April 2020 to the Middlebury Dance Program's Facebook page.)

To build on this structure, the women mined their dance backgrounds. Brown is a formally trained dancer who can precisely recall and reproduce any movement sequence; Winfield is a master improviser with boundless inventive capacity. Combined, their skills allow them to ask of anything they create, "What is it, and what could it be?" Brown said. "That's how we build phrase material together."

As they've built phrases and riffed in conversation, the pair has amassed a large archive of raw audio recordings and movement videos for use by other artists involved in creating Same but Different. Monthly since September, director of photography Sam Kann, a Middlebury College senior, has spliced recordings and footage to create one-minute shorts on the work's progress. Brown and Winfield have shared them on Facebook and Instagram.

Kann has also created more detailed, five-minute versions of the monthly videos for patrons who purchase what Brown and Winfield call a "process pass." For a one-time fee of $100, pass holders are kept abreast of the work's progress and invited to give feedback. They also receive tickets to a pre-premiere reception with the artists and to the premiere and Q&A discussion, which Flynn artistic director Steve MacQueen will host. Process passes are still available. ($20 tickets grant access to the premiere and Q&A only.)

Feedback from process-pass holders and other viewers has informed the piece's development, as have the women's own experiences of watching the videos.

"We're constantly trying to see ... what the public needs to see, rather than just what we think is important," Brown noted. "We can shoot the same section five times and take the best one, and that gives us a real kind of non-ephemeral lens."

"The camera work gets really close," Winfield said, "so it feels personal and intimate to the best of our ability."

Brown called the video a "beautiful hybrid between storytelling narrative and physical interaction that puts the lens in places you would only notice if you were watching it live."

"So much of that credit goes to the partners that we've picked," Winfield affirmed, noting another thing she and Brown have in common: "really wanting always to have a team and to work with others and respect the expertise that different folks bring."

The women anticipate that the video will reach many more viewers than would a live performance. They plan to engage with communities across Vermont and the U.S. through the video, workshops and seven-minute improvised performances like those that formed the foundation for Same but Different.

Will they keep developing the piece? "We're going to have opportunities to continue to deepen and grow it and think about it," Winfield said. "Based on who Christal and I are, it will always continue to change."

Same but Different premieres online on Saturday, January 30, at 7 p.m., followed by a live Q&A. $20; tickets and viewing are available through Saturday, February 6. flynnvt.org. Learn more about process passes at christalbrown.com/invest and lidawinfield.com.

The original print version of this article was headlined "Close Contact"