Dance Tramp Does the Fool Around 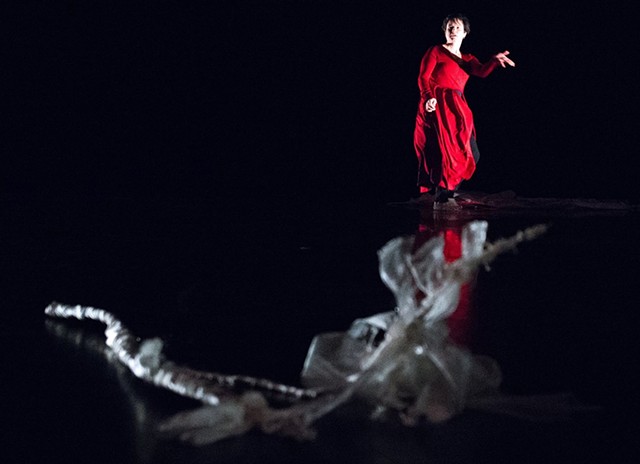 How do you make sense from nonsense, or vice versa? That's the question Dance Tramp, a Burlington-based dance collective, attempts to answer with its newest production, "nonsensibility: every body plays the fool."

The 5-year-old collective calls itself a "dance think tank." But founding member Clare Byrne, who lectures in dance at the University of Vermont, says, "These days, [it] feels as much like an 'emote tank' as it does a think tank." Many of the group's eight dancers have experienced emotional upheavals in the past few years, from identity struggles to the death of a child.

Dave Clark and Julie Peoples Clark lost their daughter, Ella, almost two years ago. Byrne says the upcoming production will be the first time Dance Tramp has performed as a group since Ella's death and that "she is certainly invoked, celebrated, in Julie and Dave's duet, and in other pieces.

"So our theme," Byrne continues, "is how you make sense, or don't even try to make sense, of things as life surprises you, as life takes you down for a tumble or plays you for a fool."

Poignant as that concept is, it's not immediately clear how it will translate into the collaged dance performance that viewers will experience next week at the FlynnSpace.

Marly Speiser-Schneider is collaborating with Avi Waring on a piece that orbits around "the idea of choices," the former says. "What happens when you have one option, versus two and three?" she adds cryptically. Byrne says the duo will use detailed geometric "equations" or "floor maps," which also sound intriguingly mysterious.

For her part, Byrne will perform what she calls a "horsey" ballet piece titled "The Ghost of Rocinante." She'll play her White Witch alter ego, drawing on goddess archetypes. The piece somehow also concerns Don Quixote — hence the title (Rocinante is the name of the hapless knight-errant's horse).

As for the White Witch, Byrne says, "I take comfort [in] finding her within me, as a real bonafide destroyer goddess, a shape-shifting goddess, someone who says ... sacrifice is going to happen. Someone is going to die or laugh or feel awkward, or feel something."

Speaking of alter egos, Selene Colburn, an assistant library professor and dance liaison in the Department of Music & Dance at UVM, will unveil a new one in her Dance Tramp piece. "In the character of the Skeez, I was inspired by the elaborate, deeply committed personas and alter egos developed in the tradition of drag," Colburn says.

Paul Besaw, associate professor and dance coordinator at UVM, is performing a "club-dance-gone-formal" piece with Byrne and Speiser-Schneider and has choreographed a "goth-camp" duet that will be executed by Tierney Munger and Waring. He sees this particular performance as a sort of tightly knit anthology. "We're actively looking for and discovering ways of connecting what we're doing," he says of the participating dancers, "so it's not just a collection of separate works."

How the performers will weave these disparate pieces together remains to be seen. But if there is connective tissue, or an overarching theme, it most likely won't be forcefully apparent.

"I think it's safe to say that none of us are interested in 'goals' or 'takeaways' for the audience," Byrne says. "Not to say that we want the work to be unfathomable or unfocused, but there's a real desire to give permission to everyone in the room to have their own interpretation."

The original print version of this article was headlined "Fooling Around"