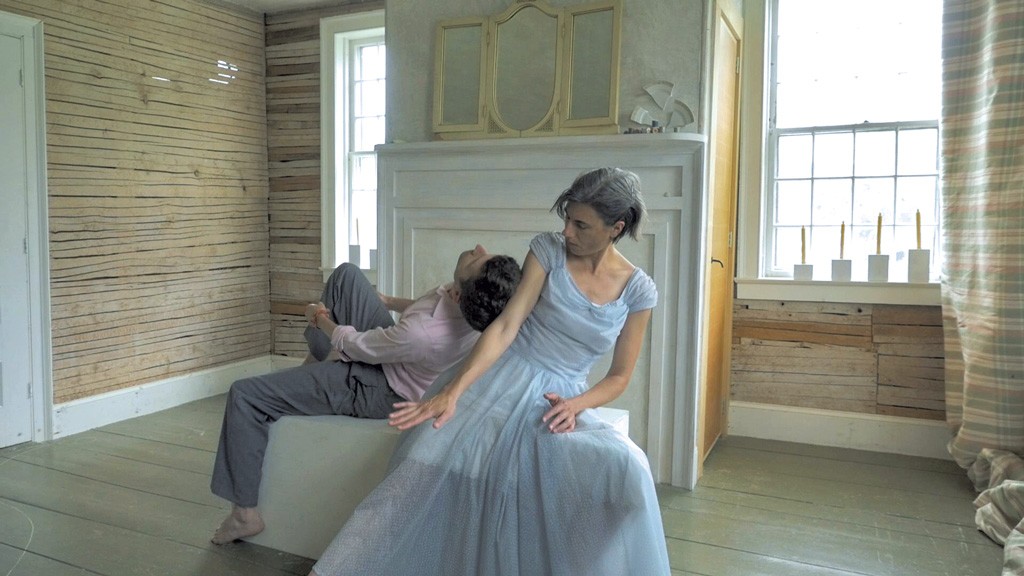 Never in his wildest dreams would Abdiel Kent have imagined that dancers would one day take over his inn and dry goods store. The owner of A. Kent's Hotel was surely a practical man — who wasn't in 1830s Vermont? The thought of a bunch of barefooted women (and a few men) maneuvering through his quarters in strange synchronicity would likely have made him glad to be gone from this world long before their appearance.

Most current-day Vermonters would never have considered bringing dance to this emptied brick building in Calais, now called the Kent Museum at Historic Kents' Corner and under the aegis of the state's Division for Historic Preservation. But Hannah Dennison did. This week the Chelsea choreographer, along with visual artist Leslie Anderson and composer David Severance, presents to the public the dance/theater piece "Threads and Thresholds" in the historic structure.

This work is not only site-specific; it is room-specific, as a recent preview of the performance revealed. Dennison and co. have created vignettes involving more than a dozen dancers in various configurations in a series of spaces throughout the building. The audience will be limited to 20 people at a time; those viewers are allowed to remain in each room for a specific interval, then are ushered to the next room by one of the performers. "Threads and Thresholds" resembles a guided tour in a museum, except that no one tells you anything. Instead, you are left to see, feel and think what you will.

The rooms themselves, some stripped down to the lath, become characters on this tour — presumably the "thresholds" of the title. Anderson's visual staging of these spaces is evocative and nostalgic. She has brought a bit of the outside in, with dried flowers, leaves and tree branches. Animal life is suggested, too, by a pile of white feathers (chicken?) in one room, and gobs of sheep's wool (or is it cotton?) in another. Mysterious as they are, these elements seem to represent the exigencies of time. Life is lost, nature moves on, substance becomes ephemera.

Anderson underscores the other half of the work's title with sculptural installations such as parallel rows of string held tautly overhead, like the waiting warp threads of a loom. Here and there, knotted masses of thread hang on walls; a ball of string sits on a shelf. These may represent projects left behind, or still to come.

A less literal thread — of history — manifests itself in a small downstairs room where dozens of vintage photos have been arranged on the walls. All of them depict relatives and ancestors of the performers. The audience is allowed to linger and examine these images — most depicting strangers, only their era identifiable by hair and clothing styles. There are some world-famous figures, too: President John F. Kennedy, Queen Elizabeth, the Shah of Iran and his wife. One of the dancers, it turns out, had an ambassador in the family.

But most of the installation's history lesson is rightly and necessarily focused on the Kent Museum. In recent years, the building has undergone repair and partial restoration, including the installation of an elevator. Its practical uses are gone and nearly forgotten, but its rooms survive and seem to embrace the new activity of community events and exhibits. "Threads and Thresholds" is the museum's first dance installation. Just as Dennison's 2013 "Dear Pina," claimed the cavernous expanse of Shelburne Farms' Breeding Barn, so she has shaped this work to fit the Kent Museum's more intimate, contained spaces.

It does not seem right, in this preview, to reveal the entire experience that awaits audiences beyond the photograph room in "Threads and Thresholds." But (slight spoiler alert) don't be alarmed by a sudden calamitous noise that precedes this dreamlike journey. Where chairs are provided, do sit, watch and listen. And do be prepared to climb a steep staircase to the upstairs ballroom. There the largest ensemble flows together, as four musicians — on piano, violins and cello — perform Severance's stirring score. For performers and audience alike, the experience is simultaneously about moving through history and being present.

As one emerges, afterward, into this bucolic corner of Vermont, the feeling remains.