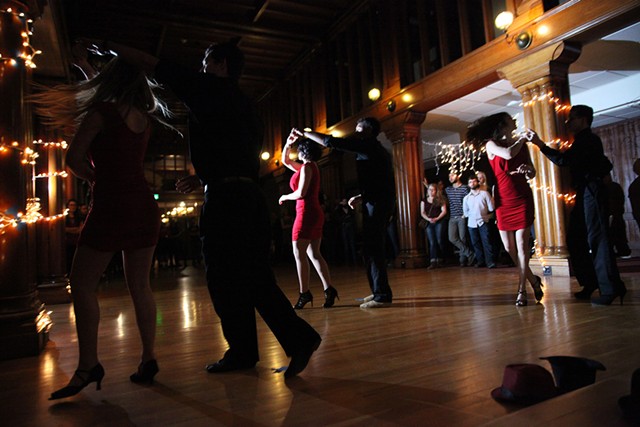 As incongruous as it may sound, a salsa congress is actually a thing. There's nothing legislative about it, nor is it an event where men and women wearing power suits shimmy to the beats of Afro-Cuban music. Instead, it's a multiday salsa festival — usually held in a big city — that includes social dancing, workshops, performances and live music.

Burlington will host its first-ever salsa congress this Friday through Sunday, March 4 to 6, at the Hilton Burlington. Organizer E. Victoria Moore says out-of-state DJs and at least 35 internationally known professional dancers will arrive from Atlanta, Boston, Montréal, New York, Philadelphia, Toronto and Washington, D.C. Individually, many of these dancers have visited the Queen City to help out and teach at Moore's Salsalina dance studio. But they've never performed there together.

"These are all big-name people," Moore says. "To have them on stage, every night, that's going to be impressive."

Attendees will be itching to show off their own moves, she says, so the showcases are capped at an hour each evening to allow plenty of time for social dancing.

Moore is a former ballroom dancer who started learning salsa in 1999 and launched Salsalina in 2003. But her passion for the dance motivated her to give it an even bigger platform in Burlington. Moore began planning for the congress in December 2014 under the guidance of Guesley Chery, founder of Montréal's Salsa Secret Society.

The local event, officially called Nixmotion, will not be a cookie-cutter one, Moore assures. "Salsa congresses are pretty routine. People go to a hotel, and all they do is social dance, take workshops and watch performances, and that's the end," she says. "What we are trying to do is to inject different activities, so it keeps it more lively."

The unconventional goings-on will include a standup comedy act by salsa performer Christian Evans, an Iceblock Social, weather permitting — think beach party in Miami, but with hats, jackets and snow — and a trip to Sugarbush Resort to learn snowboarding and skiing. After all, "nix" means snow in Latin.

"We're in Vermont, so you want to use all your resources, which [includes] the mountain," Moore says.

Local talents featured during Nixmotion will include Ray Vega, a Grammy Award-winning jazz musician and University of Vermont lecturer; and salsa music DJs Hector and Jah Red. Moore's students from the UVM Salsa and Swing Society will join other dance professionals and perform during the showcase on March 4.

Another factor that makes Nixmotion unique, Moore points out, is its appeal to beginners. "If this were a straight-up salsa congress, I wouldn't suggest non-dancers go, because the only thing you'd enjoy is the performances," she says. "In our case, we have so many extra activities that even a non-dancer can have a really full weekend."

Several types of passes and tickets are available to accommodate dancers and those who want to attend dance workshops or just listen to the music.

"I really hope people will enjoy the art we're presenting, and they will have a great time," says Moore.