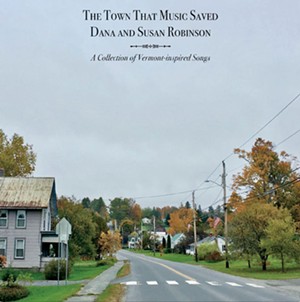 In 2010, Cabot author Ben Hewitt penned a book titled The Town That Food Saved: How One Community Found Vitality in Local Food. In it, he chronicled how a collection of so-called "agripreneurs" — farmers, restaurateurs and other food-focused small business owners — rescued the neighboring town of Hardwick from economic decline by building a model for sustainable economic development through local food systems. Almost a decade later, Cabot couple and folk musicians Dana and Susan Robinson took inspiration from Hewitt's book to conceive something of a musical companion, their new album The Town That Music Saved.

In the Robinsons' case, civic salvation is more theoretical and less evidentiary than what Hewitt's richly reported book describes. In the opening title track, Dana says, or sings, as much: "Could it be the town that music saved?" Rather than a studious examination of how music ties communities together — because who the hell would want to listen to that album? — The Town That Music Saved functions as a celebration of small-town unity. It's a folksy, lyrical love letter to back roads, backwoods gathering spots, and the twin pillars of rural ingenuity and independence.

That's not to say the Robinsons' record suffers a shortage of detail. To the contrary, Dana, who wrote all 10 songs, imbues the material with lovingly rendered specificity. As the couple riffs on actual neighbors, real-life general stores, muddy roads and local lore, among other topics, the album exudes a profound sense of place. We might call it farm to turntable — if it were available on vinyl.

Dana is a master storyteller, spinning his yarns with the precise skill of an artisan loom weaver. Susan adds depth with pitch-perfect harmonies and admirable chops on guitar, banjo and other instruments. On "The Flying Farmer," the couple constructs a profile of Vermont farmer and pilot Will Ameden that's as compelling as one you might read in a small-town newspaper. On "Alibi Bag Rag," they toast the Den, the speakeasy-ish pub at Harry's Hardware in Cabot, where they sell small bags of nuts and bolts as a cover for errand-running patrons who linger overlong at the bar. Other tunes, such as "Ripton Country Store" and "Mud Boot Road" offer similarly cozy snapshots of small-town Vermont life.

It's an instrumental cut, however, that best captures the mood and charm of these Green Mountains — at least for this listener. Sweet and serene, the gentle mandolin and guitar duet "Bayley Hazen Blues" ripples and eddies like a cool forest stream.

The Town That Music Saved is indeed a celebration of community. It's also an example of it. In addition to the fine efforts from both Robinsons on a variety of instruments, contributions from the likes of fiddler Katie Trautz, drummer Lee Blackwell, bassist Mitch Barron, trombonist George Voland, and engineers Colin McCaffrey and Bob Amos give the record a distinctly collaborative and distinctly Vermont feel.

The Town That Music Saved is available at robinsongs.com. Dana and Susan Robinson play an album-release concert on Friday, March 1, at the Cabot Town Hall Auditorium.