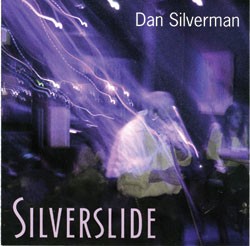 When George Gershwin read DuBose Heyward’s novel Porgy, he immediately contacted the author and suggested they collaborate on an opera based on the book. Eight years later, production finally began.

Like Gershwin, local trombonist Dan Silverman held onto the notion of his latest creation for a long time, having worked as a psychologist and an orchestral trombonist while waiting to become a professional jazz musician. Appropriately, his new album Silverslide opens with “Bess, You Is My Woman Now,” from Gershwin’s operatic adaptation, Porgy and Bess.

The tune establishes the album’s featured trio of Silverman on trombone, Clyde Stats on bass and Todd Watkins on drums. Nick Cassarino sits in on guitar. The rest of the disc hosts a handful of players, both local and national.

Inspired by a McCoy Tyner piece, “Thanks McCoy” was written for a brass quintet 30 years ago, played once, and — in Gershwin-like fashion — put on the back burner for nearly 20 years before a rhythm section was finally added . . . 10 years ago. Tom Cleary’s loud and dissonant piano works well with the core trio here, if at times relegated to the rhythm section. Later, Silverman’s trombone moves deftly as the other players fade into nothingness.

“Cocolalla Land,” composed by singer Judi Silvano, is an interesting concept piece played by Silverman and saxophonist Joe Lovano. Silvano exhibits a beautiful voice and full range, yet her singing comes off as rather academic.

On “Yesterdays,” Silverman again showcases his fluid, seasoned trombone chops as he recreates the standard from a 1957 classic, J.J. Johnson and Stan Getz at the Opera House. Some critics once thought Johnson was playing a valve trombone rather than his slide because of his speed and ease in soloing. Silverman shows extreme dedication and ability in playing this song so precisely.

“Some Dirge,” a reinterpretation of Carla Bley’s “A Genuine Tong Funeral,” is referred to by its composer as a “dark opera without words.” Silverman and company give the funereal song a kind of comedic treatment. The track wails like a sad hobo clown. Sorry, no vibraphone on this version.

“Alone Together” showcases some great bass work by Stats as he pairs up with Cleary on piano once again. Watkins lets loose a great drum solo near the end.

Silverman plays the trombone like it ought to be played. It’s a melancholy sound, familiar to jazz aficionados — and J.J. Johnson acolytes. For the uninitiated, he plays like a lone cat melodically howling at the night.

Dan Silverman celebrates the release of Silverslide this Saturday at FlynnSpace.