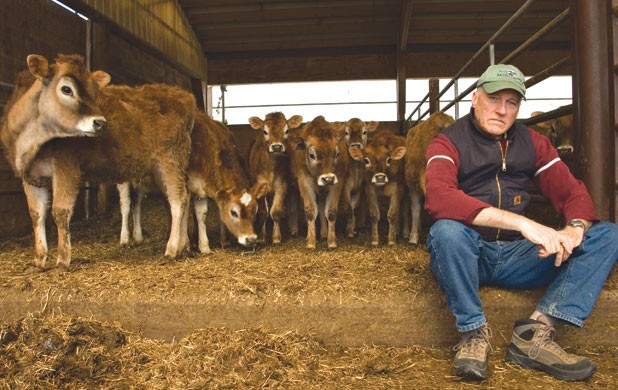 If James Maroney had his way, we wouldn’t be writing about him at all.

We’d be discussing, instead, the state of agriculture in Vermont, the crisis of floundering dairy farms and pollution in Lake Champlain — all issues that Maroney thinks should stand on their own, beyond the matter of his polarizing advocacy. These are causes near and dear to the former organic dairy farmer’s heart, and which he has addressed for years at local farm bureau meetings, at Statehouse hearings and in the pages of Vermont newspapers.

So far, not many people are listening.

“James is a good guy, and he has great ideas, and he’s been really marginalized,” says Jon Erickson, a professor of ecological economics at the University of Vermont and the executive producer of the documentary Bloom. “It’s a shoot-the-messenger kind of thing going on here.”

That’s because Maroney’s unwelcome message is directed at a small group that is not only resistant to change but enjoys protected status in Vermont: conventional dairy farmers. The state, he believes, should ban herbicides and pesticides, artificial fertilizer, and pharmaceuticals in farm animals. To do so would be the death knell for nonorganic-milk producers in Vermont.

What kind of ag man would advocate shutting down farms? The kind who says he is deeply worried about the economics of modern dairy farming, which he contends encourage consolidation, drive out small farms and shackle farmers to milk payments that don’t cover true costs. The kind who says lake pollution is too great a price to pay for propping up dairy.

“This isn’t about food, and this certainly is not about milk,” Maroney says. “It’s about the way we farm and what we do with the waste.”

After years of making his case, Maroney is the first to admit his appeals have fallen mostly on deaf ears.

“Where is the charismatic leader to sell this idea?” asks Maroney, who is as didactic as he is emphatic, his hands moving swiftly before him as he outlines his concerns. “I’m not that person.”

It’s not for lack of trying: First, Maroney made the economic argument that transitioning to organic milk production could earn farmers better prices and more stability.

But “conventional” still accounts for 80 percent of Vermont’s dairy production — perhaps, Maroney suggests, because the word “organic” “conveys to some farmers … something ‘girlie-men,’” as he put it in his 2008 book, The Political Economy of Milk. There was also the small matter of organic milk prices plummeting during the recession.

So Maroney shifted his focus to conventional dairy’s adverse impact on Lake Champlain. “It’s their Achilles’ heel,” he says of nonorganic-milk farmers. “They have no answer for it.”

Maroney claims agriculture is responsible for roughly half of the phosphorous that makes its way into Lake Champlain. Extra nutrients come from spreading manure or artificial fertilizer on fields, which then wash off into streams. The nutrients cause algae blooms and other water-quality problems.

Maroney began attending meetings of the Citizens Advisory Committee for Lake Champlain and was sorely disappointed in how little was being accomplished. “There’s tremendous reluctance to do anything of substance to clean up the lake,” he says.

Maroney’s new tack? At 68, he has enrolled in a master’s program at Vermont Law School with the intention of crafting a litigation plan that addresses the matter.

“Farmers are impervious to change,” Maroney says. “The legislators are frightened to death. I can’t get to the consumers.

You come at them from the law,” he says, “and you go to the heart of the matter.”

Maroney used to work as an art dealer in Manhattan. He and his wife, Suki Fredericks, left the city in the 1980s to establish Oliver Hill Farm, one of the largest organic dairy farms in Vermont. Although “organic” was a fairly new concept then, Maroney, who has a blurry image of a carrot tatooed on his left forearm, was very familiar with the practices: In the late ’60s, after a stint with the Marine Corps, he wrote away to the Rodale Institute — “organic pioneers since 1947,” according to the group’s website — for organic certification for his vegetable farm in Bedford, N.Y.

Being from out of state hasn’t helped Maroney’s case. His quotes in a Burlington Free Press article last December provoked the paper’s online trolls to write some vicious comments. In an earlier blog post, the paper’s environmental writer, Candace Page, described Maroney as a man “on a doomed mission.” But she went on to say that his “clear-eyed look at the facts on the ground” intrigued her. Page wrote that too often nonfarmers “tend to take a romantic view of black-and-white cows, red barns, green pastures.”

Erickson ran into exactly this kind of romanticism when filming Bloom, which looks at the growth of blue-green algae in Lake Champlain.

“In urban places like Burlington, we still have this kind of fairytale image of agriculture and cows grazing in the pasture, and it sits alongside a pristine lake,” he says. The real picture isn’t so pretty.

True to form, Maroney took aim at the otherwise popular Working Lands Enterprise Investment bill during a legislative hearing last week at the Statehouse. The bill would funnel private and public investment into developing the ag and forestry industries in Vermont. Former Vermont Secretary of Agriculture Roger Allbee, now the chair of the state’s Working Landscape Partnership, says the bill isn’t designed to pick “winners” in the state’s diverse ag community, but acknowledges that value-added businesses are paving the way for what he calls a paradigm shift for Vermont agriculture.

The bill won near-unanimous support from those who came to testify. Maroney’s beef was less about what’s in the bill — though he accused it of being overly nostalgic — and more with what’s missing.

By remaining silent on issues of environmental and economic concern, he went on, the bill undermines the values it purports to support.

The science behind pollution in Lake Champlain isn’t perfect, Allbee points out. Most ag pollution comes from what are called “nonpoint sources” — “which are just that,” Allbee says, “nonpoint.” The Clean Water Act describes this type of pollution as coming from diffuse sources, such as runoff or precipitation, rather than discernible, “point sources.” Farmers and researchers are trying to address that challenge with buffer strips to keep farm animals away from waterways, an emphasis on grazing rather than raising fertilizer-dependent crops and aerial surveys to monitor where pollution is especially problematic.

Professor-filmmaker Erickson offers a different reaction. “A lot of what James Maroney says strikes a nerve, which makes me think he must be getting something right … The challenge, of course, is that dairy agriculture is quite literally the sacred cow in Vermont.”

Maroney was uncharacteristically subdued last week while testifying before the House Ag Committee. That may be owing to a VLS course he’s taking about how to be more “politic.”

He made his case — though his statement was cut short by the time limit for speakers — and then retreated back into the audience, where he watched the proceedings over his eyeglasses, his arms folded over his chest.

At the end of the hearing, Rep. Carolyn Partridge (D-Windham) looked around the room, ready to offer Maroney a few more minutes to finish addressing the lawmakers. By that time, he’d left, frustrated, he says, by how little substance he heard in the remarks of other speakers.

What he would have said, had he stayed, was this: There’s a better way for Vermont to do business. In The Political Economy of Milk, he proposes forming a Vermont organic cooperative that would market milk and other goods within a 300- to 500-mile radius.

Erickson has his own set of prescriptions: It’s time for Vermont to lead the way, he says, in an effort to strip away subsidies propping up commodity agriculture and invest, instead, in farming that makes ecological and economic sense.

“We tend to create a lot programs that are carrots, that are incentives, and we tend to just incentivize the farmers who are doing the good practices already,” he says. “We’ve got to get honest about to what degree do we need a balance of carrots and sticks. That is the hardest conversation to have about Vermont dairy.”

Hard, yes — but one Maroney believes is worth starting.