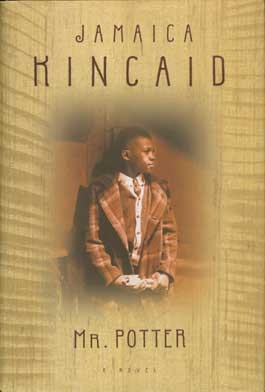 What does it mean to a young girl to have a loving father  or not to have one? Go to any bookstore and youll find authors insisting on the need for male role models in a young boys development; visit any multiplex and you can see a teary celebration of the mother-daughter bond.

The father-daughter relationship gets less press, perhaps because we assume the feelings about our same-sex parent play the greatest role in shaping who we are. We joke about daddys girls and mamas boys, as if the primary purpose of the other parent were to spoil us rotten.

And yet, as Bennington author Jamaica Kincaid shows us in her new novel, Mr. Potter, the girl who grows up fatherless is missing something deeper than the material goodies a father can provide, deeper even than his affection and support.

The novel is narrated by Elaine Cynthia Potter  the authors given name  whose birth certificate bears an empty space with a line drawn through it where a fathers name should be. The story that produced that space is all too ordinary: a stormy break-up, a bitter mother and a father who was already well practiced in the art of ignoring his illegitimate children.

But what it means to the adult narrator is a sense of being doomed to a life lived without full knowledge of her past. Going on heresay until she finally encounters him as an adult, she knows Mr. Potter only as an enigma  she calls him my specter. And in her alienation from him, the daughter comes to feel like a specter too: Not only did he ignore me, he made sure that until the day he died, I did not exist at all.

Despite the Father's Day timing, there is nothing Hallmarkish about this book. In her previous works, both fiction and memoir, Kincaid has shown herself to be an expert on the exquisite anguish that relations can inflict on each other, with or without malice. Always at the forefront has been the figure of her mother, a woman so powerful, both in her love and in her brutal disapproval, that her daughter often wondered if she was capable of surviving her.

In The Autobiography of My Mother, Kincaid showed us how this woman might have told her own life story: angrily, poetically, in a first-person voice that took no prisoners. Like Autobiography, Mr. Potter is a novel, leaving us to wonder whether the narrator of the book is in fact Kincaid and Mr. Potter, her father. Yet this narrator sounds like a researcher pursuing an elusive subject. She never takes us far into the title characters mind, even as she reminds us again and again that this story is his. Mr. Potters life is his own and no one else should take precedence, Kincaid writes.

Instead of hearing what Mr. Potter thinks of his life, his string of disgruntled lovers and his deserted offspring, we simply observe the man  a chauffeur in St. Johns, Antigua  as he goes about his daily routine. We hear about the sun that beats mercilessly on him, the well-pressed clothes he wears, the cars he loves to drive, snatches of songs that pass through his head. To us Mr. Potter seems both banal and enigmatic, an ordinary man with ordinary feelings and habits, singled out by the authors rapt attention.

Kincaid suggests that even to himself Mr. Potter is both a known and an unknown quantity. But her story is really about the daughters desire to know what these glimpses of a life can never tell her: why her father wasnt there. While this desire is familiar to anyone who has grown up without a parent, Kincaid implants it firmly in her setting. She shows us an Antigua invisible to the tourist, where poverty is omnipresent and nature is a force of both life and death, and where the past crowds the present, forcing its pattern on the future. Delving into Mr. Potters own family history, we learn that his abandonment of his daughter is a perverse sort of legacy. For Mr. Potter too was born with a line drawn through the space for his fathers name. And his teen-aged mother abandoned him  later but perhaps more cruelly  by walking into the sea.

This pattern doesnt limit itself to the narrators family. Wherever Kincaids chantlike prose takes us on the island, we find loss, suffering and a pervasive sense of betrayal. Mr. Potters father, Nathaniel, curses the God who withholds fish from his nets. Mr. Potters daughters, each with a different mother, squabble for his love and his money and come up empty-handed. Mr. Potter himself loves only the male child who is the offspring of his wifes affair with another man.

Throughout the book Kincaid hints at the links between the Potter familys internal fractures and the dark legacy of slave-labor on Antigua, where sugarcane fields still hold their history of horror unspeakable imprisoned in each stray blade, each stray stalk. She captures the way in which we tend to repeat the past not because we like it, but simply because we know it and fear the unknown:

And injustice became so real to [Mr. Potter] it was like breathing, it was like oxygen, it was like standing up always there, it had a right to be there, and its disappearance would mean a new order, and in that case where would Mr. Potter be?

The style of Mr. Potter takes some getting used to. More than any of Kincaids previous works, it reads like a transcription of an oral narrative, something meant to be recited or sung rather than read. As in a piece of music, the forward motion of the story often gives way to a circling one in which themes, ideas and even phrases repeat themselves. Long, spiraling sentences bring us back again and again to the authors constants:

[Nathaniel Potter] died, and he left Mr. Potter, his son, and Mr. Potter was my father, my fathers name was Roderick Potter.

These repetitions can be frustrating, especially early in the book, and some passages could benefit from editing. Yet the repetition ultimately works in that it shows us the narrator dancing around the abyss where her father should have been. The echoes give us a sense that, no matter what the daughter may learn about her father, at the center of his  and her  story is this empty space: My present, at any given moment, will echo his absence.

Sometimes Kincaids style feels like poetry, sometimes like a magical incantation whose purpose is to raise a dead man and make him speak, to remove him from the great and everlasting silence. Throughout the book the narrator reminds us that she can make her father speak, or at least try to, because she can read and write. Mr. Potter, an illiterate, has left no account of his life; ironically, only the daughter he ignored can memorialize him. Kincaid gets hold of a fascinating theme here: the power we wield when we tell other peoples stories.

Many novels tackle the problem of healing the painful rifts between parent and adult child: Think of Rebecca Wells cult bestseller, Divine Secrets of the Ya-Ya Sisterhood. But few of these stories acknowledge that writing down bitter memories allows the child not just to experience closure but to exact revenge. What vengeance could be sweeter than telling your version of the family dysfunction when its too late for your parents to counter with their side of the story?

Kincaids narrator resists any temptation she might have had to turn her absentee father into a villain or a victim, choosing instead to keep her focus on the simple, undeniable facts of his life. Yet she reminds us repeatedly that the Mr. Potter we see is her creation, woven from a composite of reality and imagination: In this way I make Mr. Potter and in this way I unmake Mr. Potter.

Mr. Potter is less a tribute to a father than it is to the creative power that enables a daughter to break the patterns of her past.