When Kevin Martins takes customers' electronic payments for their drink orders at Onyx Tonics in Burlington, he makes quick mention of the final step in the digital transaction but doesn't emphasize it.

"There's a prompt here if you need it," Martins, a barista at the College Street coffee shop, says in a dismissive tone before swiveling the iPad checkout screen in the customer's direction.

The "prompt" is the screen in the Square Stand point-of-sale system that suggests possible gratuity amounts. Once they've swiped their credit card in the reader, customers must decide whether to tip $1, $2 or $3 on a coffee that typically costs between $3 and $7. They can also choose a custom amount or skip the tip entirely.

Transaction technology has turned tipping into a default — at cafés, bakeries, restaurant takeout counters, ice cream windows and food trucks. In big cities, even some dry cleaners and movie theaters include a gratuity screen at checkout. Some merchants' systems suggest an additional 15, 20 or 25 percent instead of dollar amounts.

Physical tip jars were never so confrontational, sitting passively to the side at the point of sale. In Martins' view, the new technology makes tipping seem mandatory when it shouldn't be. "When you show someone that screen, it's like, 'Are you going to make the right choice?'" he said.

Some consumers find the automated ask for a handout downright irksome, if angry posts on social media are any indication. As a barista, Martins said, he doesn't tailor his service just to get a tip, so he takes an equally low-key approach to the gratuity screen. He'd prefer to downplay the moral prodding of the technology and allow his customers to make the choice to tip freely, particularly as more of them are struggling with tight budgets. "People come from different walks of life," he said.

Already widespread before COVID-19, point-of-sale platforms that include tipping prompts became ubiquitous during the pandemic. Some holdouts finally adopted the technology as a low-contact alternative to handling customers' cash or credit cards themselves. Others installed the systems to process online sales when the lockdown closed their brick-and-mortar shops.

John Rovnak, an Onyx Tonics regular, added a tip when he bought his usual Americano earlier this month. "Now I feel like everybody wants a tip," the 47-year-old Essex resident said. "It's always asked of you through the technology."

But he doesn't mind, he said. Since the pandemic, he has added a gratuity more often, even for takeout orders of pizza or Chinese food that he wouldn't have tipped on in the past. The technology, he said, reflects a societal shift in tipping habits.

Before, "if I paid cash, I would leave whatever change I had," Rovnak said. "I feel like I'm more likely to tip now than when I was just paying with cash."

"I know that, at the end of the day, that's a human being that's doing a job." Stephanie Baer tweet this

Across the Burlington area, many consumers said they have adjusted to the technology, and some even embrace it.

"It's very normalized at this point, and I always tip," Stephanie Baer, 35, said as she walked down College Street with a chai latte from Leunig's Petit Bijou Kiosk.

"It's nice that it gives you amounts, because I don't do math," she added.

When the screen pops up, she usually hits the 20 percent option to acknowledge the service. "I know that, at the end of the day, that's a human being that's doing a job," she said.

Questions about tipping technology invariably lead people to disclose their tipping philosophies. Those who are unbothered by the digital prod for generosity, or who even appreciate it, say they tend to tip consistently in most circumstances. Those who dislike the prompt cite a more traditional view of tips as a recognition reserved for exceptional service.

"It really stresses us out when we are prompted to tip," said Lizzie Post, the great-great-granddaughter of etiquette expert Emily Post and copresident of the Emily Post Institute, now based in Vermont.

"When you have to select a tip and self-select the amount, we get really judgy about our own behavior, and we feel these eyes looking at us," she continued. "It's this connection to the idea that If I don't tip or I don't tip enough, I'm going to be seen as cheap and ungenerous and bad."

The problem is not just the prompt to tip but the suggested amounts, in Post's view.

"Most places are inflating the suggested tip amounts," she said. "It's not 10 percent for your coffee. It's not, you know, 'Just add an extra dollar for a tip to the order.' It's not 'Would you like to put your change into the tip jar?' It's 'Wanna pay 20 percent, 25 percent or 30 percent extra to your order as a tip?' That's ridiculous. Most of these places are already starting their tipping amounts beyond the standard recommended amounts for the service or for the item."

Business owners counter that the ultimate choice remains with the customer. 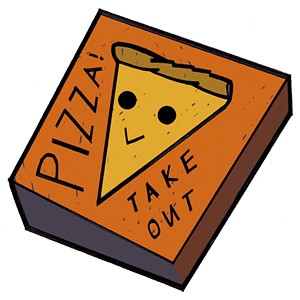 Onyx Tonics has been using the Square system since it opened in 2016. Café owner Jason Gonzalez initially set it to suggest tips of 15, 18 or 20 percent of the transaction total, he said. Since resuming in-person service in 2021 after a pandemic closure, he has switched to the "smart tip" setting of dollar amounts, which Square allows on transactions of less than $10.

Only a few customers have complained about the robotic request, Gonzalez said.

He heard more complaints during the café's pandemic closure, he noted, because Square added an automatic 20 percent tip and a processing fee to online orders, though customers could opt out of the gratuity. For customers who just wanted a drip coffee, it was a lot of hassle.

At the end of each day, the Square system calculates the total tips, and Gonzalez distributes that amount among his employees based on the hours they worked, he said.

He said he would prefer to forgo tips and incorporate tax and a little extra for his staff into his beverage prices. But he fears his customers would balk at the higher cost when they're already paying a premium for his product. Consumers today are more sensitive to price increases than they are to tipping prompts, Gonzalez said. He suspects that customers tip more with the prompt than they did with the tip jar but has no data to verify it.

Dario Zarrabian examined how electronic tip suggestions influence consumer behavior in a 2019 study for his honors thesis in applied mathematics at Harvard University. He found that when a system changed the lowest tip suggestion on a $10 purchase from $1 to 15 percent, or $1.50, the average tip rose by 7 cents, which amounted to a 12 percent increase.

"It does make me feel pressured at times," Joanne Beaubien said of the tipping prompts. The Fairfax resident recently started using Apple Pay on her phone. "If I'm spending $7 for a coffee or something, I don't always feel like tipping," she said, "because that's expensive to begin with."

Nunyuns Bakery & Café in Burlington's Old North End is one local establishment where the technology won't automatically prod credit card customers to tip. That's because the 15-year-old business has no internet service, which is required for a Square-type system, explained Kristine Harbour, who co-owns Nunyuns with her husband, Paul Bonelli. The cafe's older point-of-sale system connects to a small card reader on the counter via the phone line. Once customers insert their cards to pay, Harbour has to bring up the screen on the reader for the customer to choose a tip of 15, 18 or 25 percent or a custom amount.

"I just bypass it because it's easier for me," she said of the tip screen as she rang up her final lunch order on an early October afternoon. "I also don't feel like people should feel compelled."

Many customers ask to tip anyway, Harbour said, and she obliges them.

The tipping prompt sometimes startles customers who are making a retail purchase — for instance, buying a bag of Onyx Tonics beans to take home and brew themselves. Square doesn't give merchants the ability to apply the automated tip recommendation to certain transactions and not others, Gonzalez said. It's all or nothing.

At Mirabelles Bakery in South Burlington, all customers — even those who buy a single muffin — are asked whether they want to tip. That prompt comes from a more advanced Square Register system, which includes a shiny black card reader that takes payment while staff process the transaction behind a monitor.

Craig Pepin doesn't mind the "nudge," the Burlington resident said as he left Mirabelles with a special-order cake for his wife's birthday. "There are situations where a tip is called for, and it's OK to be reminded," said Pepin, 56, who tipped on the price of the cake.

Unlike sit-down restaurants, cafés and takeout places are still a "gray area" for tipping, in his view. "It's supposed to prompt you when you're not thinking" about a gratuity, he said of the automated tip screen.

Diana Carlisle, a Burlington resident who gave her age as "above 70," said she has grown comfortable with the checkout technology. But she doesn't always agree with the automated suggestions, particularly when her transaction is small. "I don't want to give 15 percent on two and a half bucks."

In those cases, she wants to give more, she said. So she bypasses the prompt screen and throws a dollar bill in the tip jar.

The original print version of this article was headlined "Pro Tip"