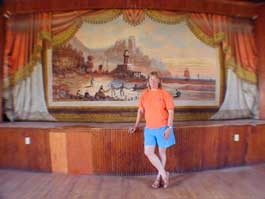 A landscape from another time and place overlooks the dusty, rarely used second floor of the land-locked Starksboro Public Library. Mounted in the proscenium arch of a small stage, a painted canvas curtain shows fishermen hauling their net onto a beach, with a lighthouse in the distance. The design incorporates a make-believe plaque that reads “Cape Wrath,” the northwestern tip of Scotland. The picture, which dates back to 1911, includes the artist’s signature: L.L. Graham of Brooklyn.

How did a New Yorker’s almost century-old work, set a continent away, land in this sleepy little Addison County village?

The unlikely juxtaposition can be traced to a rural renaissance in the late 19th and early 20th centuries. That’s when local and itinerant painters, many of whose names have since been lost, traipsed into town halls, opera houses, granges and Masonic temples throughout the state. Starksboro’s Scottish scenario is one of at least 110 decorative curtains that were commissioned to adorn the places where ordinary people gathered for entertainment.

“Evidently, we had a wide-ranging cultural life,” observes the Vermont Museum and Gallery Alliance’s Christine Hadsel, who is spearheading a drive to identify, catalogue and eventually restore the curtains. Crafted between 1880 and 1940, in many instances these fanciful fabric murals were forgotten or taken for granted before the current project began.

Each curtain is linked to what was once a thriving cultivation of the arts far from America’s urban centers. “The amount of activity was just astonishing,” Hadsel says. “Towns spent money to bring in magic shows, music, lectures, plays. Vermont was not as much in the boondocks as we’ve been led to believe.”

The curtains provided country people with a sense of sophistication. In a society shaped by the Civil War, the Victorian Era and the Industrial Revolution, the desire for a more worldly outlook seems to have taken hold in every remote hamlet. How else to explain the 98-year-old curtain with a splendid view of Venice hanging in the Haskell Opera House, which straddles the U.S.-Canadian border in tiny Derby Line?

“They were travelogues,” suggests Michael Sherman, a liberal studies professor at Vermont College who helped launch the Alliance survey.

The Haskell’s curtain was created by Erwin LaMoss, a Boston scenic artist who threw a few of his theatrical sets into the deal. His fee for the Italian vista: $800.

Some curtain artists stayed closer to home by memorializing Mount Ascutney or Lake Willoughby. Yet others had a more commercial vision, selling ad space on the image.

“There’s a wonderful, imaginative array,” says Hadsel, thumbing through a scrapbook of photos documenting the project: Roman chariots race across a curtain in the Westminster Town Hall. Cottages and a waterfall grace one in Vergennes. A relatively modern piece in Townsend shows a Model T automobile, a trolley car and trains. A Bakers-field curtain features a biplane.

Hadsel points out that although other regions have similar curtains, Vermont appears to the only state surveying its “collection.” Why? For one thing, more of these treasures seem to have survived here.

“Vermonters don’t throw anything away,” says Sherman, who has been researching painted curtains with Hadsel and Newark conservator Mary Jo Davis for about five years. “We started out knowing about a dozen of them, but never realized there would be 110 curtains out there.”

With seed money from grants, the team began contacting town clerks and putting notices in the newsletters of non-profit associations to ask if anyone knew of curtains in their midst. About 75 communities responded.

Sherman and Davis, who heads the Alliance’s Vermont Collections Care Program, hunted down the leads. Hadsel periodically joined them. “Some curtains could be lowered from balconies using ropes,” she remembers. “Sometimes, the ropes were gone, so they had to get up on ladders. We found curtains stored under or in back of stages, and had to crawl around through mouse droppings to get to them.”

Sherman stumbled upon his first painted curtain in Bakersfield almost 10 years ago. He was serving as director of the Vermont Historical Society at the time and researching the life of Charles Andrus. The late Enosburg Falls painter had left behind a Civil War cyclorama — a visual chronology of historic battles meant to be unrolled as a narrator described them. Sher-man bought it from Sotheby’s auction house in 1988.

Sherman realized that Andrus was one of only two such known artists in the state. The other was Charles Henry, a Charlotte man who produced his own family theatricals wherever he was hired to paint a spectacular canvas — Sherman says the clan always ended its show just as the patriarch was applying a final brush stroke. Henry’s curtains can be found in Hardwick, Albany, Westminster, Saxton’s River, Guilford and Huntington.

Though Andrus and Henry were contemporaries, there’s no evidence they ever met. However, Sherman cites one example of what sounds like professional rivalry: “Andrus painted over a curtain Henry had done in the town of Chittenden.”

Sherman believes both were good artists, though not necessarily great, and largely unknown outside of Vermont. “They’re not in the company of Rembrandt or van Gogh,” he opines.

Almost eight decades after the death of Charles Andrus in 1924, his great-granddaughter Cynthia Babbott of Shelburne has been able to help the researchers piece together her ancestor’s legacy.

“He earned his living from the curtains, giving art lessons, doing gold-leaf lettering and designing brochures,” Babbott says. “My mother, who was nine when he died, has two of his paintings — a picture of my great-grandmother’s hand and one of a boy feeding apples to a horse. My uncle has a pastoral scene.”

An unframed Civil War painting by Andrus, “Sherman’s Ride,” was found in a Burlington warehouse about 25 years ago. The Vermont National Guard now owns it.

Andrus’ curtains hang in places like Hyde Park and Irasburg and also once graced a Queen City landmark. “He created one for the Howard Opera House,” says Babbott.

Unfortunately, somewhere along the line — perhaps when Magram’s department store took over the Church Street building — the curtain was obliterated along with the beautiful baroque decor. “It went the way of history,” notes Hadsel, whose black-and-white photograph from the Howard’s glory days reveals an apparent woodland motif by Andrus.

She also has vintage photos of Barre and Montpelier opera houses, both of which lost their painted curtains over time. Vergennes, on the other hand, managed to restore its curtain when the Opera House was renovated.

Hadsel had a eureka moment last week, when she learned that a painted curtain — still rolled up on a pipe above the Contois Auditorium stage — resides in Burlington City Hall. She began making calls to arrange a viewing as soon as possible.

“It’s so much fun to discover these things,” she acknowledges. “They may not be great works of art, but there’s so much heritage there.”

When Hadsel and the others first looked for funding, they had no idea how many curtains awaited them. “There was not much information,” she recalls. “We had little to go on, but we just knew in our hearts this would be significant.”

After securing $8000 from the National Trust for Historic Preservation to begin the survey process, they went after money to stabilize the curtains suffering from neglect. The National Endowment for the Arts came through with $30,000. Another $20,000 has been donated by the Windham and Vermont Community foundations.

“We’ll start with 15 curtains this fall,” Hadsel says. “An advisory committee will help choose which ones need immediate attention. We plan to hire a textile conservator and other experts on paint and mechanical issues, like pulley systems.”

In each town that’s selected, she hopes to train volunteers to work with the conservator and care for the curtains in the future. Local officials will be asked to contribute between $500 and $1500 to the cause. “I’ll help them find ways to raise the money,” Hadsel vows. “We can approach historical societies and arts councils, even Rotary or Kiwanis clubs.”

A second phase of the project, to protect more curtains, depends on additional funding. Hadsel has already applied to the National Parks Service for a cultural conservation grant that would cover the entire collection.

The “Cape Wrath” curtain, in shades of blue, brown, gold, orange and green, could certainly use some restoration. It’s marred by a few small holes. A horizontal band of faded paint runs near the top. But none of these imperfections detract from the laboring fishermen, the sailing ships anchored in the bay, the waves lapping the shore or the shine of the lighthouse beacon.

L.L. Graham painted an ornate gilt frame around the Scottish setting and gave the whole scene added perspective with mock velvet drapes on each side. This surreal flourish — trompe l’oeil curtains painted on the real curtain — imparts an air of grandeur to the dust-covered room.

Unlike Henry, Andrus and flatlander itinerant artists such as Erwin LaMoss, Graham most likely did not set foot in the town where his work survives. “I think this is one of the curtains that was simply ordered,” Hadsel says. “He may never have even seen Vermont.”

The presence of the made-in-Brooklyn curtain is remarkable nonetheless. “Who’d ever think such a thing would hang here in Starksboro?” Hadsel asks rhetorically. “It’s such a romantic image.