We know, we know. After you've pored over Seven Days' performing arts preview cover story on September 24 and reading our local theater previews last week, your weekends are pretty much booked from now until next June.

But don't put those calendars away just yet. More is coming down the pike from Vermont theater companies, including a highly stylized production of Dr. Jekyll & Mr. Hyde from the Middlebury Actors Workshop; a musical puppet show, O, Caligula!, penned by Burlington playwright Kevin Christopher; plus, Saints & Poets Production Company's family-friendly Winnie-the-Pooh. (Spoiler alert: Everyone except Christopher Robin is a puppet.)

Here's a peek into those theater happenings and others. And stay tuned for more previews and reviews in the coming weeks, as local thespians dive into the 2014-15 season with a mix of new works, classics and quirky theater-making events.

Puppet-arts production company Saints & Poets, based in Colchester, brings two shows to Burlington's Off Center for the Dramatic Arts this season. The first, a stage adaptation of A.A. Milne's Winnie-the-Pooh, co-directed and produced by Jess Wilson and Kevin Christopher, opens this week.

With weekend performances from Friday, October 10, through Sunday, October 19, S&P's Winnie-the-Pooh is a tabletop-style puppetry show. Unseen puppeteers maneuver a dozen hand puppets (Pooh, Piglet, Owl, Eeyore and others) onstage while a prerecorded audio track plays the dialogue. The one actor visible to the audience is 12-year-old Stella Pappas, an S&P veteran who appeared in last year's Ozma of Oz: A Tale of Time, as Christopher Robin.

"Part of Saints & Poets' model is putting on a family-friendly show and then a more mature show each season, and Winnie-the-Pooh is appealing to the younger crowd," says Seth Jarvis, a Burlington playwright, actor and member of S&P's board.

"A few years ago, Saints & Poets had a really successful production of Charlotte's Web geared toward the same audience, so this is similar," he adds. "Both are kids' stories with some meat to them, so they're appealing to adults as well."

Parents, leave your kids at home for S&P's second production, O, Caligula!. Christopher's original take on the tale of a mad Roman emperor features an original score by local musician and University of Vermont professor of music Patricia Julien. That show won't be performed until April 2015, but Jarvis, who directs, is already singing its praises. 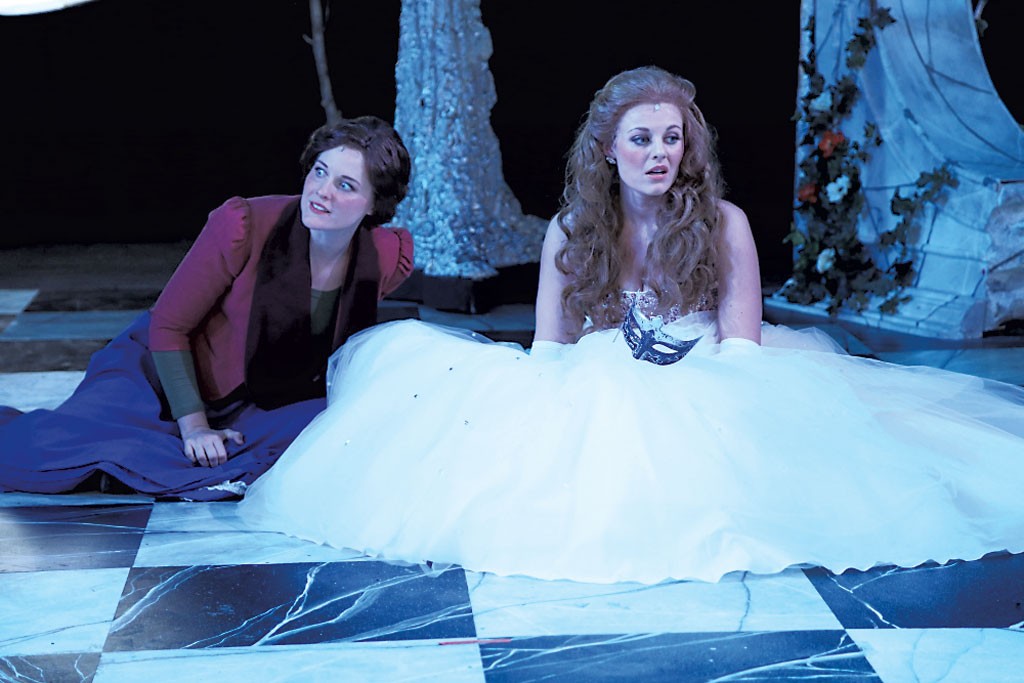 In contrast to Winnie-the-Pooh, O, Caligula! features puppets designed by Meghan Dewald that will mingle with actors onstage. "The puppetry is more integrated into it," says Jarvis. "There just are a few puppet characters, such as Caligula's horse — which he installed in the senate, because he was crazy like that."

Jarvis sums up the play like this: "A mad Roman emperor wreaks havoc and devastation on his country — while singing."

"It actually took me a few readings to figure it out," says Lourie, who is also MAW's artistic director. "It's a psychological whodunit, and the story is always a step ahead of you."

While the play's central plot line and characters are drawn from the 1886 novella (in which a straitlaced English doctor's scientific experiments give birth to an id-like alter ego who freely commits the sins he can't), this version of Dr. Jekyll is uniquely suspenseful.

"The novella is a very straightforward telling of the story; there's no suspense at all and no women in the book," Lourie explains. "But ever since this book was written, it's been adapted for stage and film many, many times ... [and many adaptations] added a woman love interest. There's always, like, a virginal, sweet, rich young thing, and there's always a prostitute involved with Mr. Hyde. And he ends up murdering her."

Audiences can expect to see a different treatment of the characters — particularly in the lone female role, Elizabeth — in MAW's production. Four actors (led by Gullikson) play facets of Hyde. Ugalde's Jekyll has a deep fear of women and no love interest, but mistrusts Hyde's intentions toward Elizabeth. Without giving away too much, Lourie confides, many conventional interpretations of the story and its characters "get turned around."

Playmakers kicks off its second year at the Off Center for the Dramatic Arts next Monday, October 13, with a "Short Shorts" event. Playwrights of any experience level are invited to show up with a one- to five-page script, and theater folks gathered at Off Center will cast and stage readings of each script on the spot. There's no cap on participation — when it comes to scripts, the more the merrier.

Playmakers, founded and hosted each month by Seth Jarvis, had a successful first year last season, with well-attended monthly events designed to encourage the creation of new (and often irreverent and zany) theatrical work. The usual format consists of three staged readings of new plays by area playwrights — and anything goes, content-wise — followed by a more polished piece. Audience members then vote on their favorite play, and the winning script is directed and produced for the next month's event.

"Last year was received really positively," Jarvis says. "Of [the playwrights] who participated, many said they found it beneficial, and I think a lot of the actors and directors who participated were challenged in different ways."

After local playwrights, actors and directors whet their whistles with "Short Shorts," Playmakers will return to the staged-readings format in monthly events beginning November 10.

Carol Dunne, artistic director for Northern Stage in White River Junction, is on a mission. "My vision for this theater is to build on its history and to broaden the programming so that it encompasses a widened range of works," she says.

Sondheim's journey into "happily ever after" is followed by Clybourne Park, a Pulitzer Prize-winning satirical comedy that delves into race relations in 1960s Chicago. Next up is a reimagining of A Christmas Carol, starring Emmy-winning actor Gordon Clapp, for the holidays. In the new year, audiences can look forward to a production of British comedy Blithe Spirit; the world premiere of Orwell in America, first presented in a staged reading in Northern Stage's debut New Works Now festival; and the celebrated musical Songs for a New World.

"When I chose this season, I focused a great deal on transformation and the courage it takes to leap into the unknown," Dunne writes in an email.

Northern Stage is undergoing some transformations itself. The company broke ground in late September on a new $9 million theater building, which should be completed by the start of the 2015-2016 season.