Vermont is famous for its pastoral scenery, friendly people and rustic Yankee charm. In other words, it's quaint AF. But the Green Mountain State has a weirder, darker side, too. It's worth getting off the beaten path to discover a very different Vermont from the idyllic paradise you've seen in tourism mags. Read on for a selection of the more bizarre — and sometimes downright spooky — places hidden around the state.

Don't wear red on Glastenbury Mountain. That's the local superstition, anyway. It stems from the 1946 vanishing of Paula Jean Welden, a Bennington College student who was last seen wearing red — and was one of at least five unsolved disappearances on the southern Vermont peak between 1945 and 1950.

Glastenbury Mountain is the heart of the so-called Bennington Triangle, an epicenter of weirdness and tragedy that's something like Vermont's answer to the Bermuda Triangle. The vaguely defined area north of Bennington is renowned for alleged UFO and Bigfoot sightings. There are legends of man-eating rocks. One fanciful bit of folklore even grants the area its own nightmarish beast: the red-eyed Bennington Monster.

But the Triangle's most disturbing occurrences — and the most grounded in documented fact — are its numerous strange and unsolved disappearances, some of which involve the ghost town of Glastenbury. Once a prosperous mill town that thrived in the heyday of the timber industry, Glastenbury dried up in the 1890s and was abandoned soon after. Eerie remnants of two settlements can still be found there if you're willing, and daring enough, to hike to them. But maybe wear orange, OK?

Children throughout Vermont learn the story of Phineas Gage in grade school. In 1848, the construction worker was demolishing boulders with gunpowder to make way for a railway near Cavendish. But something went wrong. One fuse lit too early, blasting a 3.5-foot tamping rod through Gage's skull. Amazingly, he lived.

Gage drew renown as a medical marvel — a miracle, really — and once famously displayed himself at Barnum's American Museum in New York City. He died of an epileptic fit 12 years after the accident, at age 35.

There's a memorial to Gage in a park on Main Street in Cavendish. It includes a large boulder with two holes bored in the side, like the ones Gage was drilling for explosives. A plaque tells his life's story and includes a map of relevant locations, as well as a picture of his skull. BTW, Gage's real skull resides at a museum in Boston, along with the tamping rod from the accident, which he had engraved and was said to carry with him constantly.

You probably read "The Lottery" in high school, right? What you may not know was that the novella's author, Shirley Jackson, lived, wrote and eventually died in southern Vermont. And it was there she found inspiration for one of her most famous and frightening stories.

Jackson's 1959 novel The Haunting of Hill House remains the standard by which all other haunted house stories are measured. It concerns the titular Hill House, which she described thusly: "Hill House not sane, stood by itself against its hills, holding darkness within."

Legend goes that she based the house on a real place, Jennings Hall on the campus of Bennington College, where her husband was on the faculty. We can't attest to whether or not the place is murderously haunted. But the stone mansion, which indeed sits alone on a hill, is definitely all kinds of creepy. 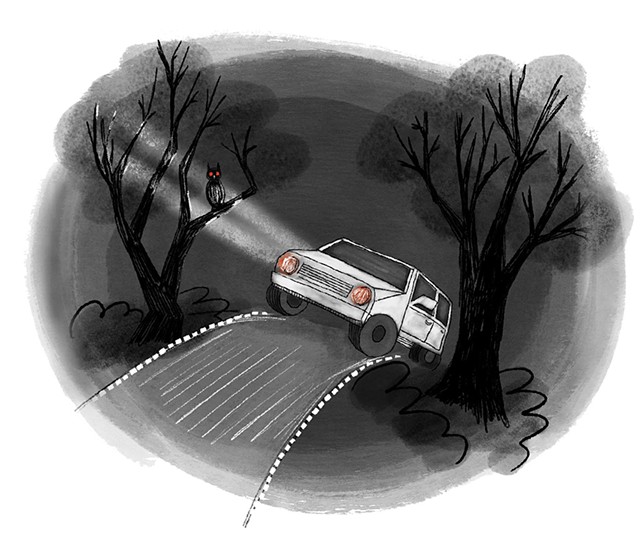 Along a lonely gravel road in the town of Richford, the laws of physics do not apply — maybe. The tiny Franklin County burg is locally famous as home to "Richford's Mystery Spot," where gravity is said to behave rather oddly. How so, you ask? Local lore has it that cars parked there will roll uphill.

Like other so-called "gravity hills" around the country, the going theory is that the phenomenon is not an affront to Sir Isaac Newton, but something more in line with David Copperfield: It's an optical illusion. Obstructions on the horizon eliminate normal reference points, tricking the brain into thinking you're going uphill.

Not everyone is convinced of that rational explanation, however. Asked in 2016 by a Seven Days writer if she believed in the mystery spot, Linda Collins of the Richford Historical Society offered the following: "Well ... I mean, I don't know what to tell you. Richford is a weird place."

The original print version of this article was headlined "Stranger Things | Keeping Vermont weird, one curious destination at a time"