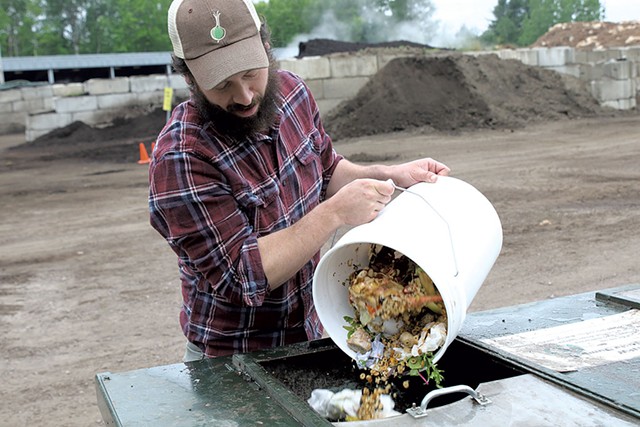 Isaac Colby parked his battered silver sedan outside a well-kept condominium in Essex Junction last week. A white plastic bucket sat on the curb, filled nearly to the brim with a mishmash of food scraps — lettuce, eggshells, a slice of pizza. Colby tucked the bucket into his trunk and marched up the home's steps to drop off a clean container. Then it was off to the next house.

This was food scrap pickup day for Some Dude's Compost Company, the one-man show that Colby, 29, runs out of the Ford Focus he's owned since he was a teenager. He started the business last summer to supplement his earnings from City Market, Onion River Co-op, where he works the afternoon shift. He spends most weekday mornings collecting food scraps around Chittenden County to drop off at Green Mountain Compost in Williston. Customers pay Some Dude's Compost $20 a month for weekly pickup or half that for once-a-month collection.

Colby has just 40 customers, but he hopes Some Dude's Compost can become his full-time gig someday.

A new law may help Colby achieve his dream. Starting July 1, Vermont residents must separate food scraps from the rest of their household trash. Most large waste haulers aren't offering home pickup service, so boutique compost businesses have sprung up to fill the gap.

"I started with no intent of [being] the next Casella of composting," said Colby, referring to the state's largest waste hauler. "But it seemed like an opportunity, and I went for it."

For a $50 annual waste-hauling permit and very little overhead, anyone can open a curbside compost service. Colby doesn't pay a cent to dump food scraps at Green Mountain Compost, a business operated by the Chittenden Solid Waste District. The facility allows anyone to drop off up to 30 gallons of food waste daily for free. Anything more than that is charged based on volume, up to $60 per ton.

More entrepreneurs have gotten into the game as the July 1 deadline approaches, and regulators expect more to do so. Still, as of early June, Vermont had only two dozen state-registered food scrap haulers.

Vermont's patchwork approach to refuse removal encourages entrepreneurship. Few municipalities offer waste pickup, so most Vermonters contract with a hauler or take their trash to a transfer station themselves. With big haulers largely sitting this one out, there's more room for the little guys to grow.

"That was intended by the law: to have choices," said Cathy Jamieson, who runs the state's Solid Waste Management Program.

Vermonters discard an estimated 77,000 tons of food waste each year, and the state's only landfill, in Coventry, is running out of room. When food waste decomposes in a landfill, it creates methane, a harmful greenhouse gas. Diverting all this waste would reduce those emissions as much as would taking 9,500 cars off the road a year, according to the state.

Although Vermont has a menu of options to enforce the new ban, compliance with the law will be on the honor system, Jamieson said. Compost police won't be ripping open trash bags to check for food scraps, nor will anyone ask haulers or transfers stations to do that dirty work. Rather, the state has tried to make composting cool by offering backyard workshops and discounted compost bins. Haulers are encouraged to educate customers on proper food waste disposal.

The ban has been a long time coming. The Vermont legislature passed a universal recycling law in 2012 that phased in a series of mandates. In 2015, recyclables were banned from landfills, and haulers were required to collect them from customers for a bundled fee. The 100 transfer stations that have replaced Vermont's town dumps had to start accepting food scraps in 2017. July 2020 will usher in the final chapter of the law.

The recycling law originally required that larger haulers pick up food scraps from all residences, but they successfully lobbied to remove that requirement. Instead, they must offer compost pickup to nonresidential customers and to apartment complexes with four or more units that are already customers. The rules get trickier for new multiunit customers: If a property manager signs up for a trash and recycling service, that hauler must offer food scrap pickup. But the landlord has the option of hiring another company in the area, such as one of the smaller startups, according to Jamieson.

Some larger companies are hauling food scraps, with limitations. Fairfax-based Duffy's Waste & Recycling will pick up compostable waste for customers in the more densely populated parts of Chittenden and Franklin counties, but it will only be free for Burlington residents. The decision came down to equipment: The City of Burlington picks up residents' recycling, so when Duffy's dual-compartment trucks come for the trash, they have an extra space for food waste.

Other towns will require additional truck runs, so customers there will pay an extra $5 to $10 to cover that cost, company president Catherine Duffy said. She's not sure how many will sign up, since many folks in the outer reaches already compost in their backyards.

Casella Waste Systems, whose trucks collect trash and recycling across the state, picks up food scraps for residential customers only in Burlington. Households pay $7 to $15 per pickup on top of their trash and recycling bill, Casella vice president Joe Fusco said.

"I am prepared to be overwhelmed." Cameron Scott tweet this

The company has three dedicated trucks for food scrap pickup. Casella may start offering the service in Montpelier but otherwise has no plans to expand until the service becomes financially viable.

"You'd rather run a vehicle down the street where there are 30 homes than [on] a six-mile stretch out in Peacham where there are two," Fusco said. "You'd go out of business very quickly."

For smaller operations, however, business is booming. Cameron Scott, owner of Burlington-based No Waste Compost, said he has "hundreds" of clients signed up in anticipation of the ban. "I am prepared to be overwhelmed," he said.

No Waste Compost opened in 2017 after Scott and his former business partner realized they could make money hauling their neighbors' compost to the transfer station. Scott never imagined his former job as a pizza delivery driver would prove more useful than his degree in computer science, but he said the gig imprinted an "internal map of the city" that helped him develop a business plan.

His fees start at $7 for once-a-month pickup, rising to about $15 a month for a weekly plan. For an additional charge, customers can get a clean bucket or compostable bucket liners after each pickup.

Last month, No Waste Compost diverted 18,000 pounds of compost from the landfill.

"We are moving everything by hand, dumping containers by hand," Scott said. "It's a dirty job."

Lori Mele subscribes to a curbside service for that very reason: She doesn't want to deal with decomposing food. Mele had tried dropping off her compost at the local transfer station, a 10-minute drive from her condo in Essex. The line was long, and the smell was overpowering. This is for the birds, Mele thought, but she still wanted to reduce her carbon footprint.

So, when a flyer for Some Dude's Compost landed in her mailbox, she quickly signed up. She pays $15 for every-other-week collection.

"The fact that this guy gets down and dirty and is happy to do it and brings me a clean bucket — that's worth all the tea in China," Mele said. She's trying to get her entire condo association to sign up.

She may face an uphill battle. A study released by the University of Vermont earlier this year found that, while 60 percent of respondents were interested in a curbside compost service, most wouldn't want to pay for one.

Nick Hammond added food scrap pickup to his Middlebury trash and recycling business in 2016. But it wasn't until he cut his prices that demand for compost service doubled. Hammond previously charged $7 to chuck a 30-pound bag of trash and another $7 to take up to five gallons of food waste. The same customer now pays $10 to get rid of both.

His 250 customers also pay for the novelty: Hammond hauls the refuse in a 20-foot wagon pulled by a team of three draft horses. His business is aptly named Draft Trash.

Hammond wakes up at 3:30 a.m. to get the horses ready and on the road by 7 a.m. After a 15-mile route, the wagon can weigh up to 9,500 pounds. When the law was being written, big haulers complained that they'd have to purchase trucks with multiple compartments to keep food waste separate, but Hammond found an easy solution: He strapped lidded garbage bins to the side of the wagon.

"These bigger companies just don't wanna deal with it," Hammond said, adding that their reticence only opens the market for businesses such as his.

"There'll be other companies that spring up," he said. "In the end, [compost is] actually a valuable product."

Jen Murphy opened Willow Tree Community Compost in her hometown of Wilder last summer to provide a neighborhood service. Every week, she hitches a trailer to her Subaru and picks up food scraps in the Upper Valley area; sometimes her two young children come along for the ride. She charges $24 a month for weekly pickup or half that for twice-monthly service. Customers can drop off scraps at Murphy's home for $6 a month.

She hauls the material to be composted at Sunrise Farm in White River Junction. Twice a year, Murphy gives her 50 customers a five-gallon bucket of topsoil created by their own food waste. She donates any leftovers to a community garden.

"Closing that loop is the focus of what we're doing," she said.

For fledgling Some Dude's Compost, the Burlington area service, the focus is on growth. After picking up scraps in front of two houses last week, Colby motored down the dirt road leading to Green Mountain Compost. He unloaded gallons of rotting food into a squat dumpster on the site as seagulls circled overhead. The receptacle's contents would be added later to the facility's mountainous piles of steaming, decomposing scraps.

That day's run was a short one. Typically, Colby works 12-hour days between his grocery store job and the food scrap side hustle. It's exhausting, but Colby said he doesn't mind. He only hopes to get busier and thinks the impending landfill ban will help.

"This is a very rare opportunity," he said. "The creative side of me sees lots of potential."