Writing about the annual Art at the Kent exhibition is both a pleasure and an exercise in frustration: the former because every bit of art on display at the Kents' Corner State Historic Site in Calais is engaging; the latter because there are far too many pieces to acknowledge in this limited space. But we can't complain about such a merry convention of creativity. The 2022 iteration, "Interplay," brilliantly melds a multitude of works by 20 Vermont artists.

Space is something the Kent has in abundance: a warren of small rooms and, up a steep flight of stairs, a capacious former ballroom. The building shows its age gracefully, with layers of faded wallpaper, exposed lath, and windows and doors that first opened upon the 19th century. This backdrop is a supporting player in the exhibition's pageant — a necessarily brief one, since the venue is not winterized. The gentle mashup of old and new calls to mind a line in William Shakespeare's The Tempest: "What's past is prologue."

Cocurators Nel Emlen and Allyson Evans, along with state curator David Schutz, excel at arranging contemporary artwork both inside and outdoors at their beloved historic site, finding purpose for every nook and cranny. But "Interplay," the 15th exhibition at the Kent, may be their most vivacious assemblage to date.

"When we were gathering works, we were looking for bridges between disparate pieces," Emlen told Seven Days. "This time we paid more attention to that [than usual]." Battered by COVID-19 and "feeling the weight of the world," she added, "we intentionally looked at work that was joyous."

Even so, the trio took some time to arrive at the show's title. "We didn't want to tell people how to feel," Emlen observed.

The artworks do a good job of that on their own — first and foremost with color. From bold abstractions by Sara Katz to meditative pastel canvases by Cynthia Kirkwood to richly saturated pigment-ink monotypes by Drew Clay, imagery pops in every room. The curators sometimes pair works of similar color value, doubling their visual vitality, and elsewhere create energetic contrasts.

The idea of interplay runs deeper than hue, though, manifesting itself in thematically linked subsets of shape, pattern, materiality or concept. On a mantel in one room, for instance, is a James Secor painting called "The Purposeful Structures Hold Us Apart." The distorted triangular and rectilinear shapes in the semi-figurative dreamscape seem to commune with Clark Derbes' jutting carved-wood piece "Fractal Time Traveler," perched on a pedestal below.

The curatorial choice to scatter each artist's works among the rooms provides frequent opportunities to consider their dialogues. Derbes' painted polygons are simpatico with a number of 2D pieces throughout the Kent. Printmaker Rachel Gross' masterful geometric compositions on paper or shaped plywood complement other artworks even as they command attention.

Gross represents a smaller subset within "Interplay": relatives. In a second-floor room, her intaglio and woodblock prints face a mixed-media installation by her daughter, Eva Sturm-Gross. The latter, "Eschaton of Leviathan & the Birdshead Messiah," consists of four floor-to-ceiling paper scrolls with two suspended banners hanging perpendicular to them at either end, forming a semi-enclosure. Printed in black and red with esoteric symbology, including the Ouroboros, the installation is graphically arresting and impeccably crafted.

Seating comprises another subset in this exhibition, and some of it is LOL funny. Timothy Clark's armless Windsor chair, painted robin's-egg blue, sits demurely before a fireplace and echoes the color in a trio of Katz paintings on the mantel. By contrast, Clark's "Big Red Chair," sited on the lawn, is too big even for Papa Bear.

Not to be outdone, Mark Ragonese presents a very high chair made of twisty driftwood. Back indoors, a long black bench by George Sawyer swoops aggressively skyward at one end, deterring any would-be sitters. 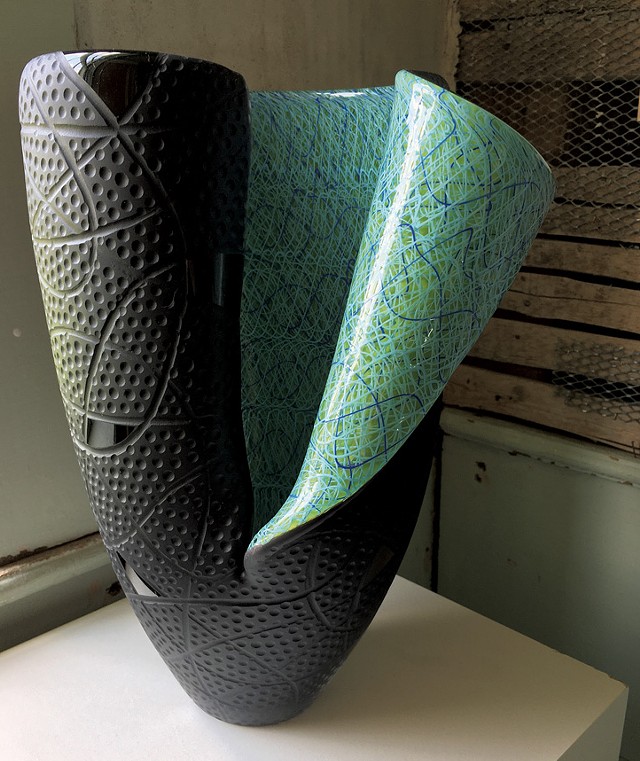 Josh and Marta Bernbaum contribute the only glass works in the exhibition, in forms that demonstrate the medium's versatility. Josh's blown, carved and shaped pieces, such as the curvy "Introverre/decolétage," are simply exquisite.

In Marta's "heavy necklace" series, teardrop-shaped "jewels" the size of paperweights are strung together and arrayed on pedestals. Peering into them, a viewer sees slightly distorted photographs that illustrate their titles. "Dissolution of Democracy," for instance, reveals depressingly on-point images that we really don't want to see. This necklace, if worn, would be a true albatross.

The sole dark note in this year's Kent exhibition underscores its mission: to observe how well we can play together.