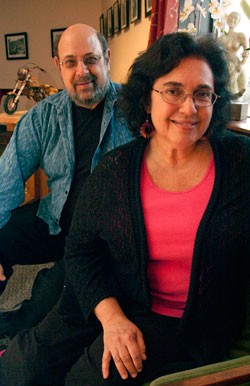 On a recent Saturday afternoon at Burlington’s North End Studio A, percussionists Jessie Nelson and Jane Boxall, who have just performed as the Snap-Drag Drum Duo, are dismantling their dueling drum kits. Radio Bean owner Lee Anderson is running around with an ice bucket, prepping for a screening of a documentary on the French entrepreneur and pastis creator Paul Ricard. Amid the hustle and bustle, studio owners Ben Bergstein and April Werner are enjoying a sliver of downtime.

It’s the perfect moment to take in the photographs of Burlington artist Robin Katrick, on view at the studio through the end of the month. Her portraits from a recent trip to Haiti depict playful children, desperate parents and rubble-strewn roads. The exhibit is a searing reminder of the lasting impact of the 2010 earthquake, which long ago disappeared from headlines.

The designated gallery area at North End Studio A is small, but keen observers will find more artwork tucked into nooks and crannies throughout the building. Bergstein and Werner, the couple responsible for the annual Vermont International Festival, spent 15 years importing Russian folk art, and their collection is vast — and still growing. Their most recent acquisition? A pair of Thai tabletop-size motorcycle sculptures made from twisted bamboo.

The venue has a decidedly international flair — the last visual art show featured work by Francophone artists. That’s partly because of Studio A’s location in the ethnically diverse Old North End, partly because of Bergstein and Werner’s history of extensive travel.

For many years, beginning in the late ’70s, the couple flew all over the world with their two folk-dance troupes, Green Mountain Volunteers and Folkids of Vermont. For six months of the year they lived out of suitcases, performing at folk festivals in Turkey, Estonia, Japan, China and many other countries.

At the same time, they began importing Russian crafts such as matryoshka, or traditional nesting dolls, textiles and ceramics. “Somehow it turned into a real business,” says Bergstein.

As much as he and Werner loved their peripatetic lifestyle, it began to wear on them. “We didn’t have a place of our own,” Werner says. “We would take our little band of gypsies and go wherever there was a festival.”

Finally, while on tour in Japan in 2008, Werner suggested that it was time to make a change. She must have been inspired by the bare-bones style of the traditional Japanese washitsu, Bergstein says. “She turned over on the tatami mat and said, ‘We should simplify our life.’”

It was their last tour. The couple returned to Vermont and began transforming Studio B, which they had been using as their import warehouse, into a cultural center. One storage room became a tango studio. Their loading dock was converted into a black-box theater by the nonprofit Off Center for the Dramatic Arts.

Bergstein and Werner added Studio A last year. That space, which now houses the gallery, a stage, a small café and an office, used to be the Imani Youth and Family Center, a social services organization that operated a monthly food pick-up. When Imani closed, Bergstein and Werner made an offer on the space. Bergstein’s father had recently died, leaving the couple an inheritance.

“What were my choices?” he asks rhetorically. “A house in the Mediterranean? A Mercedes? I poured it all into an arts center.”

Bergstein says he and Werner modeled their center after the settlement houses that he grew up with in New York City. The settlement movement, which began in the 1880s, was formed around the idea that middle-class people should “settle” in low-income communities to provide social services and enhance educational and cultural opportunities.

Bergstein and Werner offer plenty of the latter. Their studios are filled daily with dance and fitness classes, theatrical productions, the Burlington Westie swing group, Ronald Braunstein’s ME2/orchestra, a Congolese church congregation, AA meetings, youth dances and the Honeybee Press, among other organizations and activities.

“Roller derby,” says Bergstein with a gleam in his eye.

OK, he admits, that might not be feasible in a space like his. But he and Werner do envision starting a music school someday, and offering after-school language programs.