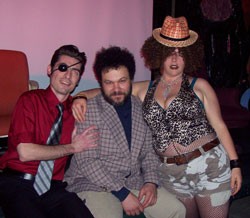 Two men sit on the stage at Montpelier’s Lamb Abbey in velvet-upholstered chairs sipping aperitifs. Dressed in a pimpalicious checked jacket, J.D. Ryan enjoys an adult beverage as he discusses his passion for the 500 spaghetti Westerns Italian filmmakers sautéed together between 1965 and 1975. His partner in crime, Mike Nordstrom — who wears a more refined version of close-fitting ’70s men’s fashion with his plastic eye patch — sips butter through a Twizzler.

This is the “First Flight” of Ryan and Nordstrom’s Flight Night — Vermont’s own “psychotronic grindhouse.” What is psychotronic, you ask? The term, coined by film critic Michael J. Weldon, refers to cult films ranging from exploitation flicks to poorly dubbed foreign pics. Nordstrom has a more colorful definition: “My favorite movies are a magical collision of bad acting, bad script and weird music — as if it were made by someone from another planet who has only ever read about movies,” he says. Nordstrom, who originally hails from New Jersey, “the birthplace of irony,” adds that for him “these movies were a gateway drug to drugs.”

Formerly the lead singer and composer for Burlington band Deep Soda, Nordstrom has known Ryan — late of the band Leon Tubbs — for nine years but only recently discovered their shared affection for the “badfilm” genre. After a year of exchanging favorites, the thirtysomething pair decided to extend their collection to the community.

The classic grindhouse experience — recently memorialized by Quentin Tarantino — entails viewing trash cinema en masse. Ryan bemoans the dawn of home video, which put an end to such group experiences. “There’s no reason to sit with a guy in a trenchcoat making weird noises behind you when you can just watch the video safe at home,” he says.

While those seedy theaters may be a thing of the past, grindhouse film nights are gaining popularity across the U.S. and Canada, Ryan points out. Still, the duo’s premiere presentation on April 18, under the banner of LFP (Looking for Pleasure) International Productions, is in a class of its own.

A huge bucket of popcorn and a Crockpot of butter await hordes of free food seekers, along with candy bars and sodas for a dollar. Drinks are BYOB, a decision Ryan hopes will create “a party atmosphere.” A number of people have come in ’70s costume.

After a tight, two-man film talk that’s half standup routine, Ryan and Nordstrom introduce a half-hour of trailers. The audience cheers for glimpses of blaxploitation classics such as Sweet Sweetback’s Baadasssss Song and Blacula, not to mention sex-education fable Teenage Mother and a film called The Worm Eaters, about a town whose food becomes magically infested with ... well, worms. Nordstrom had some reservations about showing the trailer for legendary wu shu film The Crippled Masters, about severely deformed martial artists, but the crowd voices its approval. Several reels of vintage intermission shorts urge moviegoers to eat and grab a smoke before the main event.

That’s Three the Hard Way, starring football icon Jim Brown and Fred Williamson, who also appeared in films called Black Caesar, The Legend of Nigger Charley and Boss Nigger. Notice a theme? “We have something to offend everyone,” says Ryan. Three the Hard Way portrays the black heroes’ battle against a neo-Nazi group plotting to destroy the African American population with a waterborne poison that doesn’t affect white folks. Though the stars are portrayed as intelligent, strong and generally cool, some might accuse them of overusing the N-bomb. Ryan worries that in politically correct Vermont, such antics may not fly, clarifying, “We’re diehard liberals.”

The small crowd seems more inclined to guffaw than take offense. When the flick ends, attendees are invited to head to Charlie O’s for a Three the Hard Way cocktail specially designed for the night.

What’s next in the series Ryan and Nordstrom hope to make bimonthly? “We thought we should wait for the second or third one for Nunsploitation,” says Nordstrom. “We are in Catholic Vermont.”

For more info about Flight Night, contact badfilm@fivebeforechaos.com or 454-8055.