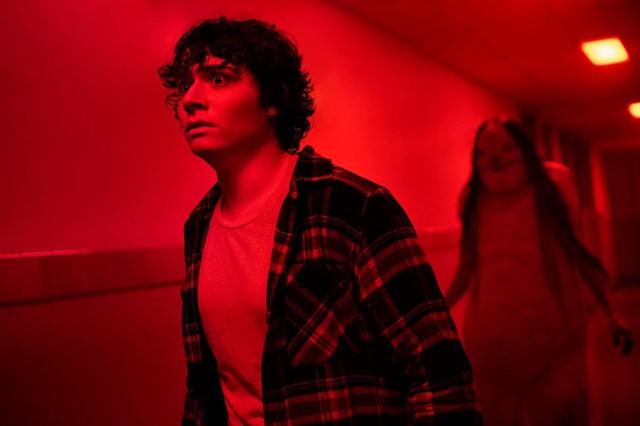 What is it about horror and nostalgia that makes them blend so well? In It, in "Stranger Things" and now in the movie version of Scary Stories to Tell in the Dark, a retro setting emphasizes the work's roots in a long tradition of popular storytelling. "Nothing really changes" is the implication — even when, as here, the setting is the watershed year 1968.

The Scary Stories to Tell in the Dark books began appearing in 1981, but author Alvin Schwartz drew liberally on preexisting folklore and urban legends. With dreamlike, ghoulish illustrations by Stephen Gammell, the books were both renowned and vilified for terrorizing a generation of elementary schoolers.

A movie version was inevitable. And, thanks in part to the involvement of Guillermo del Toro as cowriter and producer, Scary Stories is the rare PG-13 horror movie that's genuinely horrifying. Ably directed by André Øvredal (Trollhunter), the movie is too nightmarish for most kids, but teens and adults should find it a creative thrill ride.

Rather than simply present the scary stories in anthology format, del Toro and his cowriters have crafted an overarching narrative. It's Halloween 1968 in small-town USA, and teenage nerd buddies Stella (Zoe Margaret Colletti), Auggie (Gabriel Rush) and Chuck (Austin Zajur) are out for revenge on the school bullies. Their flight from their oppressors brings them to a house reputedly haunted by a Victorian madwoman who filled a book with stories written in children's blood.

Stella discovers the book and makes the classic mistake of looking inside. Soon new stories start appearing on the pages, one for each kid who disturbed the house that night. Each plays on a preexisting fear. Each comes true.

It's a predictable conceit for this type of movie, and the connections between the kids and the stories often feel shoehorned in. While the performances are fresh, the characters are never quite fleshed-out enough to give a psychological dimension to the scares.

But the flourishes make the movie work. The urban-legend elements (think spiders hatching under human skin) are visualized with the gruesome vigor of a middle schooler regaling her classmates at lunch hour. The phantoms and monsters are diverse and disturbing, with creature effects that recall both Gammell's illustrations and del Toro's Pan's Labyrinth. And Øvredal nails the pacing in key scenes, using silence and ambient sound to jack up the tension rather than relying on a creepy score.

The movie is basically a love letter to fright fans, but it tries to be more. Stella is portrayed as a nascent horror writer who bonds with Ramón (Michael Garza), a young drifter, as they watch George Romero's Night of the Living Dead at a drive-in. Other townspeople address Ramón with racial slurs, and the filmmakers tie this narrative thread implicitly to the election of Richard Nixon, repeatedly seen on TV screens near the story's climax.

In other words, for all the nostalgia on display, the makers of Scary Stories seem to want to say something about the present moment. Maybe they're suggesting that fear — the preferred tool of so many demagogues — can unite as well as divide. As Stella points out, "Stories can hurt, and stories can heal."

Many have argued that horror is inherently regressive, focused on banning "others." But the genre also evokes the communal experience of sitting around a campfire. While the elements never quite gel, Scary Stories does its darnedest to tie the hoary old trope of a forbidden tome to a message about questioning the official narrative.

Scary Stories to Tell In The Dark