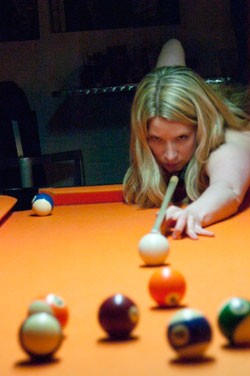 It’s a Friday night, and Liz Ford is in a line to get into the O.P. in Burlington. A hand-tooled leather pool-cue bag hangs over her left shoulder. In her right hand Ford holds a zippered portfolio emblazoned with the letters APA — it stands for American Poolplayers Association. As she waits, she peers through the open window toward the pool table at the rear of the bar. Ford is on the hunt for players. She heard the O.P. might have some.

Ford, who is a petite 5-foot-4, stands on the tiptoes of her black patent pumps to see in. Within seconds, she has surveyed the scene. The guy in the glasses and collared shirt bent over the table is a pool player. His challenger, a plodding man in a flat cap and dress pants, is not.

Ford explains: Often it’s the intangibles that point to a person’s adeptness at the sport. In this instance, it’s how the bespectacled player carries himself, where his eyes are looking, even how he’s standing that helps Ford recognize him as one of her own. She can’t go into more detail — she just knows it when she sees it.

As Ford looks on, the collared-shirt guy summarily dispatches his opponent with an authoritative smack to the eight ball, which sails into the right corner pocket. Then he comes outside for a cigarette. This is when Ford gets to work.

She strides up to the victor, a local musician named Frank, and introduces herself as the proprietor of the new Green Mountain American Poolplayers Association. Would he be interested in joining the league? As they talk, it becomes clear that Ford is actually a professional pool player, not just an enthusiast. Playing pool is her job, and she knows what she’s talking about. Frank seems impressed. He whispers to the bouncer, asking him to squeeze Ford into the bar.

The O.P. is Ford’s last stop on a Friday-night tour of local pool tables. Before this, she was hustling at Nectar’s — not cheating people out of their money, but spreading the word about her league, one of 300 such amateur APA programs in the country.

Ford didn’t find much in the way of action at Nectar’s. Just a handful of shaggy-looking college-age guys playing doubles, badly, and trying not to rip holes in the bright-orange felt. But the O.P. — now, that place holds promise.

Ford, 35, came to Vermont nearly a year ago seeking a change. She’d spent the previous decade based in New York City and traveling the world playing pool. But the city lost its shimmer, and so did the constant touring. She needed a break.

So, Ford moved with her cat, Gary, to Waterbury, where she has family, and tried to live a life without pool. She applied for jobs in the “real world,” but nothing panned out. Turns out when you’ve spent the past 17 years of your life playing pool, it’s pretty tough to find gainful employment, especially in a down economy.

But Ford says she couldn’t divorce herself entirely from pool, a game with which she maintains a “love-hate relationship.” She didn’t work all those years building her skills and climbing the professional ladder to give it all up. So she decided to invest in an APA franchise. The league, composed of three divisions of six teams each, currently plays at Van Phan Sports in South Burlington. The five- to eight-person teams play each other on league night, and the winning team in each division earns the right to compete in Las Vegas in the APA national tournament.

Ford, originally from Massachusetts (she jokingly refers to herself as a Masshole), came to pool by accident during her freshman year at Reed College in Oregon. She always had tomboy ambitions, Ford says, but wasn’t good at any traditional tomboy activities. So, when a few male friends from her dorm invited her to play pool, she jumped at the chance.

At first, Ford was terrible. So bad, in fact, that she couldn’t hit the cue ball. But she persisted, mostly so she could be one of the guys.

“I tried to keep up with them — drinking and succeeding at school without trying and playing pool,” Ford says. “But they were so much better.”

Still, she didn’t give up, much to the detriment of her psychology coursework. She practiced in the college’s pool room for six hours at a stretch, partly to stave off the isolation she felt during those years and partly to prove to the guys she could hang with them.

“I was totally there for the wrong reasons — spite, anger, loneliness. But I did grow to love the game,” Ford says.

During her last year in college, she petitioned Reed to send her to the Association of College Unions International’s regional pool tournament in Seattle. Ford won, and secured a spot at the national competition. It wasn’t long before playing pool for a living seemed like a real possibility.

Soon Ford was playing in every regional amateur tournament she qualified for, supporting her pool habit with odd jobs. She became intimately acquainted with strip malls across the United States, where many of these events were held.

“When I think about how many meals I’ve had at Denny’s...” she says, chuckling.

Pool suited Ford’s temperment — it’s a game for control freaks, she explains, and rewards intense concentration and perfectionism. The thousands of hours she spent drilling herself at the pool table paid off, and, in 2005, Ford earned her pro card and began competing on a bigger stage. By now, she reckons, she’s hit just about every Native American casino in the country — Turning Stone, Soaring Eagle and River Spirit, to name a few.

Since earning her stripes as a pro, Ford has represented the U.S. in tournaments in China, Taiwan, Belgium and the Netherlands. At present, she ranks 16th on the Women’s Professional Billiard Association tour. This is something the folks shooting pool at the O.P. don’t know.

Ford’s build is slight — Minnesota Fats she is not — and her face unwrinkled, making her look at least a decade younger. She has long blond hair, which she still gets styled at her old salon in New York. Her hands are the size of a child’s but equipped with long fingers that she uses to construct the many bridges that support her cue.

Once Ford is inside the O.P., she adds her name to the list of people waiting for the table. At this point in the evening, it’s at least six deep. Some of the games are moving at a glacial pace, ensuring it’ll be nearly last call when Ford gets on the table. But she doesn’t seem to mind. She’s happy to watch. That’s what she came here to do.

From her seat facing the blue-felted table, Ford surveys the local billiards talent — which at the O.P. is known to be pretty competitive. Besides Frank, there’s Lou, a glum-looking middle-aged man in a Hawaiian shirt; Matty, a wild-haired guy in cutoff jeans and a threadbare T-shirt; and Matty’s girlfriend, Kathie, an intense twentysomething with a high-pitched voice. A regular remarks that Matty and Kathie run the bar’s table. She calls Kathie the “queen of the O.P.”

Sipping her beer, Ford watches as players rack and break, laser in on shots and jostle for position with the many patrons packed on the perimeter. The table is shoehorned into a corner at the back of the bar, making it a tight squeeze for those wielding a cue stick.

The jammed quarters make the prospect of playing a game or two less enticing for Ford. For one, she’s wearing a short denim skirt and black tank top. She’d rather not have bar rats leering at her when she bends over to take a shot. Plus, she’ll have to make sure none of the onlookers take a mouthful of her fancy cue on the backstroke.

Still, after nearly two hours of spectating and chatting and passing out business cards to anyone who seems interested in furthering their pool game, it’s finally Ford’s turn. She unpacks a cue stick and a break stick from their case and screws them both together.

Her opponent breaks and sinks a few balls. But within minutes, Ford has routed her challenger and is ready to play another game. Next on the list is Kathie, the resident shark.

Ford draws back her break cue and, with a crack, sends the balls ricocheting around the table. She’s playing for fun, but her face suggests otherwise. Her eyes are narrowed and focused, and her mouth is pulled into a stern, straight line. She doesn’t say a word to anyone. Her opponent is unfazed. As amateur pool players go, Kathie is no joke.

The women seem nearly evenly matched, and, for a moment, it doesn’t look good for Ford. She drains all her balls before Kathie does, but she misses her last shot as the eight ball nicks the corner of the cushion. Her opponent also misses, and again it’s Ford’s turn to end the game. She stands over the table, calculating her shot. With a brisk knock of the cue, it’s over. The eight ball spins in the pocket before dropping.

Ford shakes Kathie’s hand and packs up her sticks. By now it’s after 1 a.m., and it’s a long drive back to Waterbury. She gathers her things and heads for the door — but not before pausing to pass out just one more business card.