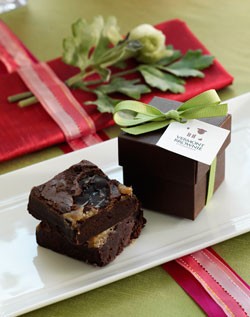 For years, customers at Uncommon Grounds in Burlington had to dig out their grubby bills or spare change to buy java. Beginning on February 6, the café will finally accept credit and debit cards. “The trend in our area is that people are using debit cards and not carrying cash. We want to keep them as customers, so we have to adapt,” says owner Brenda Vinson.

That’s not the only UG update. Starting next Monday at 6:30 p.m., the sipping spot will offer a series of $8 tastings to help educate consumers about coffee. The first three classes focus on the coffees of different world regions. The fourth is about how various roasts affect the flavor of the beans.

“It’s an opportunity to compare [coffees] side by side that you wouldn’t normally get,” says Vinson. “We thought it would be a good thing for people to learn the language of the coffee industry.” Catch the buzz...

Don’t forget to tune in to the Food Network on February 3 at 9 p.m. to watch the ladies of Vermont Brownie Company battle it out on “Throwdown! with Bobby Flay.”

Locals have known about Hen of the Wood for years, but it looks like Andrew Knowlton of Bon Appétit just made his first visit. He included the Waterbury eatery on a list of the “Best New Romantic Getaways.” The author says that “chef and co-owner Eric Warnstedt’s namesake dish, a hen-of-the-woods mushroom tartine with Vermont bacon, is a must-order.”