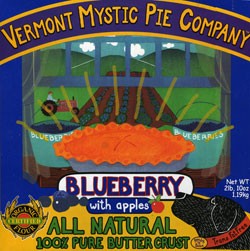 In a recent "taste test" conducted by the Denver Post, reporter Kristen Browning-Blas conducted a side-by-side comparison pitting pies against each other.

The winner? The apple variety from Vermont Mystic Pie Co., described as "closest to homemade," thanks to the buttery flavor of the crust and the fruit's "firm texture." Mystic's blueberry pie with apples came in third, though a natural disaster occurred during the baking process: "The top crumbled and broke along fault lines," Browning-Blas writes dramatically.

It's not the first national recognition for Mystic: Last November, the pie purveyor emerged with honors from another frozen pastry showdown, that one hosted by the San Francisco Chronicle.

On January 23, Bravo announced its roster of contestants for the fourth season of hit show "Top Chef." Contender Manuel Treviño III is a New York City resident whose authentic Mexican cooking at Dos Cominos Third Avenue shows off his Texan border-town roots. But he has a connection to Vermont, too. Before his star-making stints at Le Cirque 2000 and Babbo, he attended NECI.

Speaking of NECI, the school's executive chef, Mark Molinaro, was recently awarded "Certified Executive Chef" status by the American Culinary Federation. It's the second-highest level of certification available to cooking pros: The only higher ranking is "Certified Master Chef." (In 2006, there were only 62 of those in the country.)

According to the ACF website, aspiring "Certified Executive Chefs" must "supervise a minimum of five full-time employees and pass a practical exam in front of peers." Maybe they could make the certification process into a TV show?

What the heck is "Floribbean cuisine"? You'll have to ask Arthur Shelmandine, owner of prepared-foods biz It's Arthur's Fault of Jericho. In addition to selling haute sauces such as grapefruit vinaigrette and garlic caper marinade, the chef teaches cooking classes in his home. Among his winter and spring offerings is the "Floribbean" class — in which students make spicy treats such as barbecued fish rolls, callaloo fritters and Rikkita beef. Shelmandine also offers lessons in creating a "French Bistro Valentine's Dinner" and "Curries & Cuisine from the Bay of Bengal."

Fresh Coffee Now has officially moved to its new Flynn Avenue digs, leaving its former home in the basement of the building that once housed the Blue Star Café.