Inspired by the Vermont tradition of seasonal backyard ice rinks, Brian Eckert saw an opportunity to create one on the outdoor patio at Four Quarters Brewing in Winooski. Many rolls of heavy-duty plastic, gallons of water and several subzero nights later, the brewery taproom now offers skating — with a signed waiver and no brews or food in hand — on a roughly 30-by-40-foot rink.

"We'll keep it up as long as it stays frozen," Eckert said. He noted that the rink is BYOS (bring your own skates). 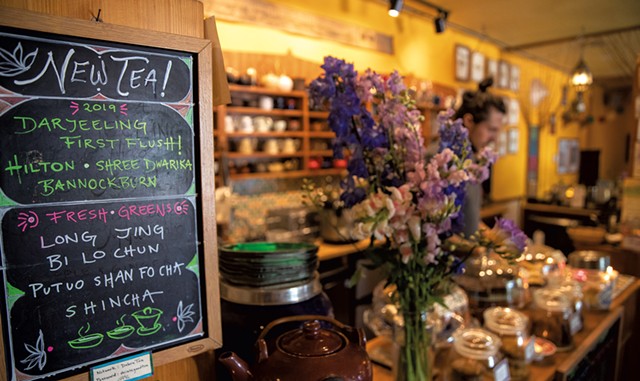 After 18 years at 80 Church Street, Dobrá Tea closed on January 2 to move a couple of blocks around the corner to 125 South Winooski Avenue. Longtime Dobrá manager Lee Meiler, who bought the business a year ago, said steep rental increases planned by the building's new owners precipitated the move. She anticipates reopening the tearoom by the end of February with the same wide range of tea offerings and an updated menu of light food. In the meantime, Dobrá continues to sell tea online.

The event-planning team behind Adventure Dinner will host the Love Bar every Thursday in February at the Love Lodge in the Kennedy Brothers building in Vergennes. Offerings include beverages, with or without alcohol, and a small menu of food such as fondue, braised-beef lettuce wraps, and caramelized shallot dip with chips and veggies.

Drinks will be designed to capture the mood of the month: The Flirting With a Stranger cocktail features elderflower, pamplemousse, cardamom, thyme and bubbles, while the Marry Me mocktail has pineapple shrub, cinnamon and nonalcoholic bubbles.

Reservations are recommended, and proof of vaccination is required.

The Brattleboro Area Chamber of Commerce has named David Hiler and Tim and Amy Brady of Whetstone Brands its 2021 Entrepreneurs of the Year. The trio's businesses include Whetstone Station Brewery and Taproom, which just marked its decade anniversary.

In 2018, the team added a stand-alone brewery, Whetstone Craft Beers. River Garden Marketplace, Whetstone Brands' most recent project, involved the purchase and renovation of the former Strolling of the Heifers space on Main Street to hold a craft-beer bar and restaurant with a rotating roster of local chefs.