Cruise Control: D.C. Lobbyists Pay Up for a Weekend with Patrick Leahy 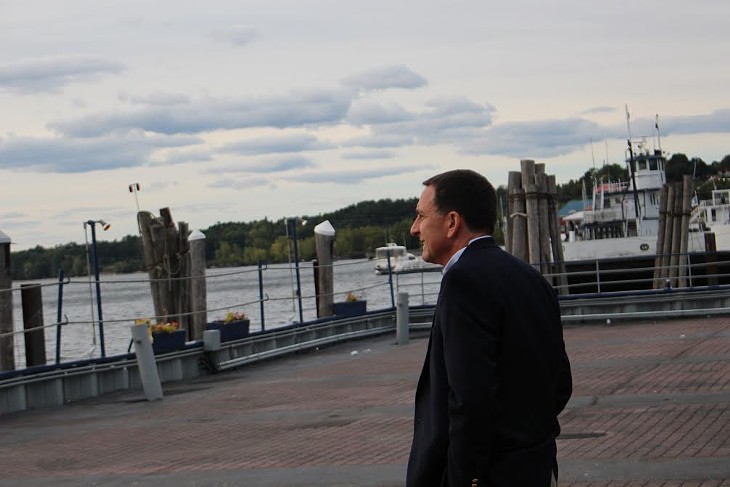 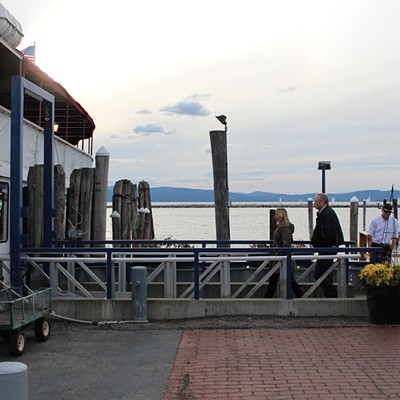 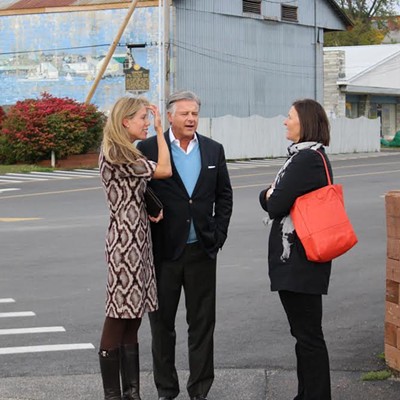 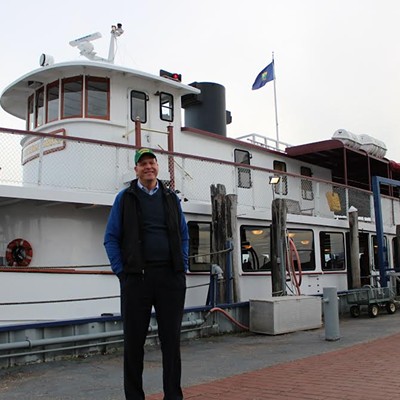 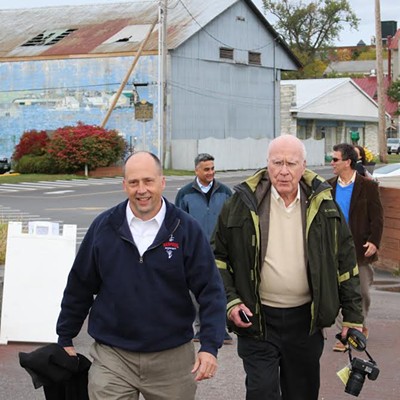 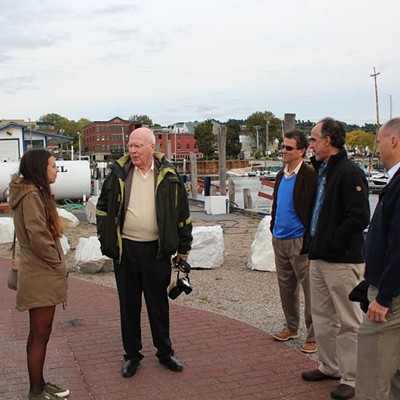 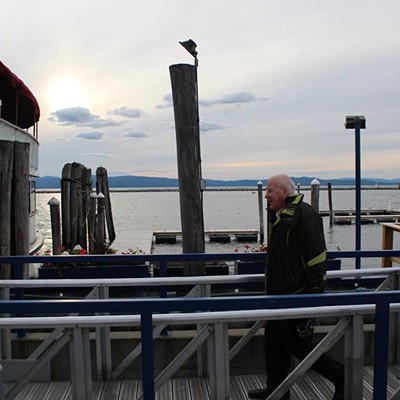 Within the mahogany-finished lounge of the Lake Champlain cruise boat, Washington, D.C., uber-fundraiser Tina Stoll signed them in for Leahy's Fall Foliage Weekend. For a "suggested donation" of $5,000 to his political action committee, they would spend the next couple of days hobnobbing with the senator — on the sunset cruise, at the Waitsfield farmers market, aboard the Stowe gondola and at dinners and brunches in Burlington.

The festivities weren't exactly open to the unwashed masses.

"I can't let you onboard because it's a private event," Leahy's longtime campaign manager, Carolyn Dwyer, said as she stood sentry on the dock under an overcast sky. "The kind, like, you pay for — so if you got on, it would be like you contributing to the campaign."

According to Dwyer, the seventh-term senator expected some 30 to 40 people — mostly from D.C. and Vermont — to join him for the weekend, each ponying up "between zero and $10,000."

"Actually," she corrected herself, "I won't say zero."

As they scurried aboard the Northern Lights to escape the brisk fall breeze, Leahy's friends mostly declined the chance to chat with a local reporter.

"Can you tell me what brings you to Vermont this weekend?" Seven Days asked one man, dressed in fundraiser-casual.

"The weather," he responded. "The foliage."

"Do you mind telling me who you are and who you work for, sir?" Seven Days inquired.

Another couple — she in a tan overcoat and he in a teal, V-neck sweater — wouldn't even say what brought them to the state.

"No thank you," the woman said.

"No thanks," her companion added. "We'll get back to you."

"What's your name, so I can get back to you?" Seven Days asked, somewhat pitifully. "And where do you work?"

By then, Dwyer had stationed herself between the parking lot and the dock, perhaps to warn approaching guests of the unwelcome intrusion by the Fourth Estate. But not everyone was averse to shooting the breeze.

"We're here to see your beautiful state — to see your great senator," volunteered a silver-maned Beltway type in a baby blue V-neck and a blazer, accompanied by a blond woman in a bold-patterned dress and black boots.

Asked how he knew Leahy, the man said, "Just from Washington."

"Yeah?" Seven Days asked. "Do you work in Congress?"

"No, I work for a variety of companies," he replied.

"And your last name?"

In the past five years, the corporate lobbyist and his wife, public relations specialist Allison Kaminsky Putala, have contributed a whopping $35,500 to Leahy's various campaign committees. That's just a fraction of the hundreds of thousands of dollars they've dumped into the nation's political system — largely by way of Democrats who serve on the Senate and House judiciary committees.

According to disclosure forms obtained by the Center for Responsive Politics, Putala has lobbied lawmakers on a range of issues under the jurisdiction of the Senate Judiciary Committee, which Leahy chaired until earlier this year. According to those documents, the lobbyist has focused his practice on patent law, wireless policy, electronic privacy and cyber security.

With that, they walked the gangplank.

Putala wasn't the only ex-Judiciary staffer in town. Curtis LeGeyt, now a lobbyist for the National Association of Broadcasters, also planned to take in a Champlain sunset from the deck of the Northern Lights.

In what capacity did LeGeyt know Leahy?

"A number of capacities," he said, retreating. "We're going to get on the boat."

Specifically, LeGeyt served as Leahy's senior counsel from 2009 until 2011, at which point he was hired by NAB to lobby Leahy and his colleagues.

LeGeyt is no stranger to Burlington. Two years ago, Seven Days bumped into him at another Fall Foliage Weekend reception — suggested donation: also $5,000 — during which he said he had a "unique relationship with Chairman Leahy."

After LeGeyt hopped onboard, the big guns arrived.

First came Ed Pagano, the hulking power forward from the University of Vermont Catamounts' 1985 squad. After 20 years in Leahy's office — the last six as chief of staff — he served two more in the White House and then became a lobbyist for D.C. powerhouse law and lobbying firm Akin Gump.

Pagano, who said he now represents Boeing and Charter Communications, among others, disclosed that he continues to work closely with Leahy's office.

Next came Luke Albee, another two-decade veteran of Team Leahy and Pagano's predecessor as chief of staff. Albee, who said he was in town to visit his daughter at UVM, was eager to defend his former boss.

"OK, so this is your, like, plug-and-play [story about] moneyed Washington special interests who are currying favor?" Albee pressed Seven Days.

"So what's the theory?" he continued. "That anytime anyone makes a campaign contribution, otherwise-honest individuals would do things they wouldn't otherwise do because basically they're open to bribery?"

"I don't know if I would put it in those words," Seven Days responded.

In a later conversation, Albee revisited the point, arguing, "This isn't 'House of Cards.'" Some donors give money to those who've long championed their causes, he said, while others seek to support those "who have a history of actually making the system work and reaching across the aisle."

"If you believe in what you're doing and you think you can make a difference, I almost think it's a dereliction of duty to not be prepared to defend your seat and to collect the resources to make the case that you should be rehired," he said.

As Albee made his case, Leahy himself arrived, trailing current chief of staff J.P. Dowd and trailed himself by state director John Tracy.

"Mr. Heintz, how are you?" the senator asked.

"Mind if I ask you a quick question before you hop on the boat?" Seven Days said.

"How come you don't come to any of my things I do around here?" Leahy said, referring to his Vermont press conferences.

After listing three recent press events the newspaper deigned not to cover, Leahy said, "I guess you don't care if I do my job. Do you?"

"I care very much," Seven Days insisted. "Do you mind if I ask you about this weekend here, sir? Who are these folks who have come up this weekend?"

"Well, I think they would like to see us back in the majority. So they're here," Leahy said, adding that he was only disappointed his wife, Marcelle Leahy, couldn't make it.

After boarding the 115-foot boat, Leahy turned his ever-present Nikon on the press and snapped a photo of a reporter standing alone on the dock. As the senator's guests ordered drinks from the bar, the captain tooted his horn and the crew removed the gangplank.

The Northern Lights chugged off into the quiet waters of Lake Champlain.

On the dock, a middle-aged man smoking a cigarette called out to the reporter, "What?! They didn't let you on that cruise?!"

After learning who was on the boat, the goateed man, who declined to give his name because he was afraid of losing his job, let loose a stream of profanities.

In an email to reporters, 2014 Republican gubernatorial nominee Scott Milne called Leahy "complicit in the growing influence of money in campaigns" because he "charged $5,000 for face time" at the Fall Foliage event

Milne called on Leahy, who has served in the Senate since 1974, to follow the example of the late senator George Aiken when he runs for reelection next fall. Legend has it that Aiken spent just $17.09 on his final campaign, in 1968.

"Senator Leahy could learn from Senator Aiken's example," Milne wrote. "I challenge him to run a $100 campaign and to demand outside money stay out of Vermont in the 2016 United States Senate race."

Hmmm ... Is the Pomfret travel agency owner planning to lace up his campaign sneakers and give Leahy a run for his, er, money?

"A lot of people have said, 'Why don't you think about running for that seat?'" Milne told Seven Days. "It's something that's on the table for 2016, yeah."

That might be the best news yet for Team Leahy, which now has a Republican bogeyman to point to as it tries to raise campaign cash. A bogeyman who last year proved to be an almost comically ill-prepared campaigner.

Sure, Milne came out of nowhere to nearly topple Democratic Gov. Peter Shumlin, losing by just 2,434 votes. But that was a referendum on an unpopular incumbent who was caught off guard in a low-turnout, antiestablishment election cycle. Vermont Democrats will likely vote in droves in 2016, and Leahy's paranoid political operation won't leave anything to chance.

"Mr. Milne is pondering a run against Senator Leahy but would first like Senator Leahy to promise he will limit his campaign spending to $100. That's a novel approach," Dwyer wrote. "If Mr. Milne gets into the race, we will be happy to discuss this or any other ideas he brings to the table."

It's also novel to hear Milne take a stand on the pernicious influence of money in politics. This, from a guy who donated more than $80,000 last year to his own campaign. Tens of thousands more came from Milne's family members, companies he controls and those connected to his real estate business partner, David Boies III.

Guess big money's OK, so long as it's your own.

The original print version of this article was headlined "Cruise Control"