Crows Attacked an Owl. Then a Vermont Trooper Showed Up 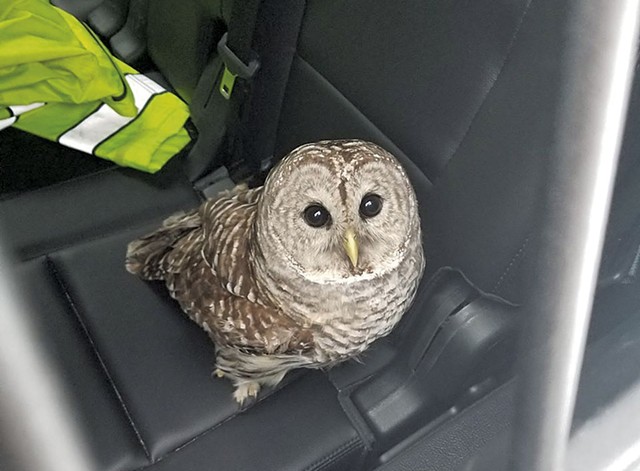 A Vermont State Trooper last week swooped in to save an owl from attackers along Interstate 91, where the raptor was losing a no-holds-barred brawl with some agitated crows.

Trooper Chad Weikel was patrolling Newbury on February 5 when he saw the barred owl, which had fallen from a tree with an injured wing, under air assault. Fearing that he was about to witness a cold-blooded killing, Weikel shooed away the attackers. With the help of a Vermont Fish & Wildlife Department game warden, he secured the victim in his cruiser and brought it to the state police barracks, where it "flew off on its own accord," VSP spokesperson Adam Silverman told Seven Days.

State police detailed the assist on Facebook. Hundreds of people quickly commended Weikel for rescuing the majestic owl from its ominous assailants, which, one person noted, "can be very mean." The post has been shared more than 2,300 times.

Vermont does not have a murder of bloodthirsty crows on the loose. Last week's encounter was actually typical bird behavior known as "mobbing," said Bren Lundborg, a wildlife specialist with the Vermont Institute of Natural Science.

"They basically kind of harass them to get them out of their territory," Lundborg said, explaining that to crows, owls are predators. Owls get mobbed so often that anyone hoping to catch a glimpse of one should just listen for a "bunch of crows yelling," he said.

"There's a decent chance there's something there that they don't like," Lundborg said.

Fortunately for bird lovers, most mob attacks come to a benign end: Owls usually wise up and move, or the crows get bored.

Of course, crows determined to take down a weakened owl could manage to get in enough blows to kill it, Lundborg said. But the attacks can also backfire: "Sometimes they'll get grabbed," he said.

The circle of life.