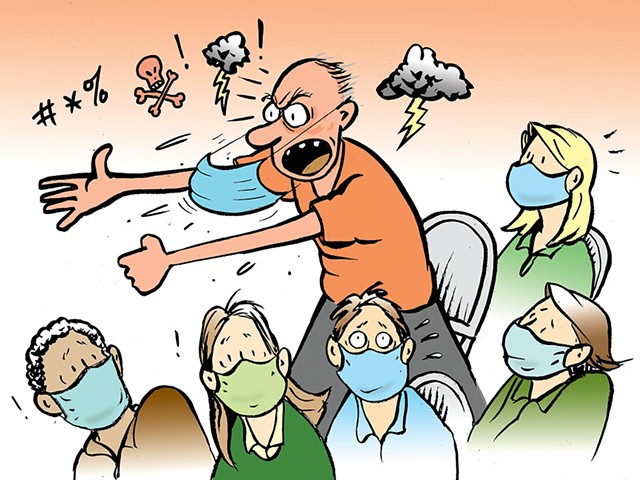 Amanda Skehan felt nervous when she stepped to the microphone at the Burlington City Council meeting on October 18. The atmosphere that night was tense. Dozens of people had converged on city hall to debate two highly charged topics: the city's plan to close a homeless encampment and a proposal to hire more police officers.

Skehan had come to ask councilors to retain the police department's domestic violence prevention position. But as soon as she broached the topic, members of the audience booed and laughed. Skehan revealed that she was a survivor of domestic abuse and said police officers can help victims such as herself. Then she turned to the crowd.

"Please, everyone, you know how hard it is to get up here and talk about this," Skehan said evenly. "Please, stop booing people."

Skehan's experience was hardly a one-off. The crowds at Burlington council meetings have become increasingly uncivil in recent months as elected officials have confronted issues including poverty, racial justice and the coronavirus pandemic. Speakers routinely blow past their allotted time during the public forums that are a regular part of council meetings. Audience members hurl profanities at councilors despite warnings.

City hall has seen plenty of fiery debates over the years, but now incivility has become commonplace and a growing concern to those on the receiving end. Earlier this month, longtime Councilor Chip Mason (D-Ward 5) announced that he wouldn't seek reelection next year — in part, he said, because "it's hard to continue to be yelled at."

The people doing the yelling say they're moved to speak — sometimes loudly — against injustice, and that attempts to police their tone distract from the issues at hand. But councilors say it's hard to listen when the message is being conveyed through shouting and profanity.

City Council President Max Tracy (P-Ward 2) began presiding over contentious meetings soon after he took the gavel in March 2020. That June, hundreds of activists called in to the council's virtual meetings to demand that the city cut police staffing and invest in communities of color. To accommodate all the speakers, the council allowed for a record-breaking 10-hour public forum, carried out over two days.

Controversy over policing has dominated public discourse since then, drawing a host of often disruptive speakers each time the topic surfaces. In January, the Burlington Police Officers' Association criticized Tracy's practice of allowing Black, Indigenous and other people of color to address the council first, arguing that the method silenced opposing viewpoints. Tracy fired back that it was racist to insinuate that all people of color are anti-police. Still, he stopped the practice based on advice from the city attorney.

Now that councilors have resumed meeting in person, Tracy gives priority to Burlington residents who come to city hall to speak during the public forums. Residents who call in come next; nonresidents go last. Depending on the number of sign-ups, people have two or three minutes to speak; the entire forum is limited to two hours unless councilors vote to extend it.

But even as Tracy has tried to create structure, the forums have become more difficult to control. In September, when the council debated a resolution calling for Israel to end its occupation of Palestine, groups on both sides of the issue clashed inside the council chamber with warring chants. Whenever a person representing one viewpoint spoke past the time limit, the opposition yelled at the speaker to finish.

The behavior isn't limited to one political persuasion. While people on the far left show up more frequently for their causes, conservatives contributed to the council's most chaotic meeting yet earlier this month when they argued against a proposed mask mandate for indoor public spaces. Not only were the anti-maskers unruly during the public forum, they also screamed at councilors during deliberations, prompting Tracy to bang his rarely used gavel.

At the following council meeting, Burlington Republican Party chair Christopher-Aaron Felker decried the "shocking degradation of civility," though he himself had ignored the time limit when speaking about the mask policy at the previous meeting.

A former council president, Councilor Joan Shannon (D-South District), presided in the past over her share of rancorous meetings, including debates on gun control and protections for abortion providers. But Shannon said bad behavior at meetings has become the new normal. She's been the target of that behavior herself, particularly for her votes to bolster the police department. At one recent meeting, activists donned homemade T-shirts with the slogan "Fxck Jxxn Shxnnxn" across the chest. Shannon suggested that these "bullying tactics" have continued because Tracy didn't rein them in soon enough.

Shannon's technique was apparent in one rowdy meeting in 2013, when councilors were debating the plan to base F-35 fighter jets at Burlington International Airport. When one man went over his speaking limit, Shannon pounded the gavel and chastised him for taking up others' time. He finally relented, and Shannon lectured the entire crowd about the need for civil discourse.

Shannon is rarely allied with the council president, but she and Tracy have met a number of times to discuss ways to control the crowds.

Indeed, Tracy's measured demeanor isn't always effective and can sometimes provoke outbursts instead of tamp them down. Last week, when activists spoke out against the city's destruction of the Sears Lane homeless encampment, many exceeded their time limit. But when Tracy asked them to "Please wrap up," members of the audience sometimes yelled back, "Shut up, Max!"

Tracy says he tries to remain calm during emotionally charged meetings, because he fears that raising his voice or taking a "paternalistic tone" would backfire — or intimidate others who want to speak. Tracy has taken to asking his fellow councilors for backup, a request both Shannon and Councilor Joe Magee (P-Ward 3) have heeded at recent meetings, when they reminded the crowd to be respectful.

Tracy said he's wary of taking more forceful steps, such as removing people from the meeting or closing public forum, and has asked city attorney Dan Richardson for legal advice on how to respond to major disruptions. He'll share Richardson's forthcoming memo with his colleagues.

"If we're considering taking additional steps, I think it's important that the full council has a chance to engage around what that might look like," Tracy said.

But Tracy said he also understands why people are upset, particularly about Sears Lane, which Mayor Miro Weinberger ordered closed in October following arrests there involving guns and drugs. Tracy opposed the decision, and his fellow Progs tried unsuccessfully to pass several resolutions to save the encampment. But acting out doesn't help the activists' cause, Tracy said, adding that it's disheartening when people ignore his "reasonable requests" to maintain order.

"It's really upsetting to be disrespected continuously," he said.

Tracy, a 10-year councilor who nearly won the mayor's race in March, isn't sure whether he'll seek another term. Asked whether the stressful meetings are weighing on him, Tracy answered in the affirmative.

"You've seen what's been going on," he told Seven Days in an interview last week. "It's pretty miserable."

Miguel Figueroa has participated in several public forums, most recently about Sears Lane. A first-year student at the University of Vermont, Figueroa said he started visiting the camp for cleanups and cookouts led by mutual aid groups. He got to know some of the nearly 40 people who called Sears Lane home.

On December 10, Figueroa watched as bucket loaders piled campers' belongings into a dumpster. He attended the council meeting three days later, telling officials, "I hope that you're all goddamn ashamed of yourselves."

Figueroa said he didn't join in his comrades' jeering that evening but understands those who did. The council's attempts to police the tone that speakers employ — and the media coverage of it — distract from the real issue, he said.

Burlington parent Jennifer Hume similarly defended her compatriots at the council's mask mandate meeting. Hume, who opposed the mandate, abided by the speaking rules, but she gets why many others didn't. She said councilors seemed to have their minds made up and weren't willing to consider critics' arguments against the mask requirement.

People were frustrated, Hume said, because the council's forum isn't set up for a conversation. People say their piece, but councilors don't respond.

"There's no debate to be had," she said. "I can see why [councilors] say, 'Don't yell.' But at this point, they've made it abundantly clear they're not listening."

Weinberger disagrees. Officials were listening at the mask meeting, the mayor said — they just vehemently disagreed with the arguments made by Hume and others.

As an elected official, Weinberger said he knows that being publicly criticized is part of the job. But constituents shouldn't be ridiculed when they address the council, he said.

"Many people have expressed a reluctance to make public comments in this current atmosphere," he said. "I think that might be the biggest casualty."

Skehan, who was booed at the October council meeting, understands that some people speak louder when they feel unheard. But it was also intimidating to be heckled while discussing her personal trauma, she said. Feeling embarrassed after she finished speaking, Skehan sat on the floor of the council chamber and tried not to cry. She said she later learned that several people were attending their first-ever council meeting — and vowed not to return because the crowd was so disruptive.

Skehan emailed Tracy to suggest that the council address the civility issue using the principles of restorative justice, where the harmed parties meet with those who hurt them and find a way to move forward. Tracy said he's open to the idea.

Meantime, Skehan says she will still speak at the council's public forums when there's an issue that's important to her.

"It takes a little bit of time to ... work back up the courage," she said. "But when you're passionate about something and you care, you do go back — just a little bit more haltingly."