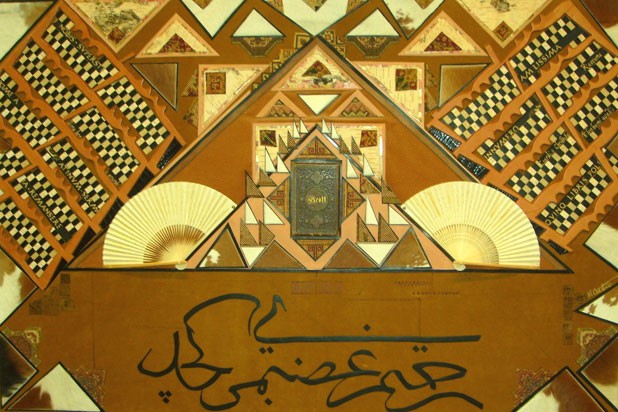 Intricate rhythms with a world beat define the 21 assemblages of M. Castano's "Persistence of Pattern: An Intimate Story of Cultures" at Brandon's Gallery in-the-Field. Castano, an accomplished mixed-media artist, displays an ecumenical approach to art making that draws on both traditional crafts and modern technology. "My formal training has spanned three continents: North America, Europe and Asia," she wrote in an online artist's statement. "The influence of living, working and studying in international centers of art is seen in architectural forms and materials."

To fully dissect the cryptic meanings of some of Castano's images requires heavy lifting - or at least some Google searching - so most viewers may find it more pleasurable simply to stand in awe of the works. On the other hand, an appreciation of their context is certainly invaluable. The title of the 60-by-40-inch "Hat Arabic Script Supporting Sir Walter Scott: Homage to Turkish Artist M. Efdaluddin" references both the 19th-century Scottish romantic novelist and the contemporary Turkish calligrapher M. Efdaluddin Kilic. "Hat" is a type of Arabic script that originated in the Ottoman Empire.

A small, leatherbound volume by Scott nestles in the center of the assemblage, just above a passage of script. In addition to the book, Castano incorporated "hair on hide, suede, hand-dyed birch bark, gold leaf, leather skeletons, Chinese fans, upholstery fabric and debossed metallic paper" into the composition. The meaning of the Arabic isn't disclosed, and Sir Walter Scott's link to it isn't obvious.

"Mario Prada Walks Beneath Stars of Murgia and Above Egyptian Pyramids" is the elaborate title of a 32-by-48-inch piece with a similarly extensive materials list. A silver circle appears in the center of the horizontally oriented, quilt-like image; turquoise fabric surrounds it. The overall color harmony is based on browns - perhaps reflecting the fact that Prada was an Italian leather designer of the early 20th century. Different kinds of leather are among Castano's most prevalent materials. Counterfeit Chinese silver dollars are nailed into the piece at precise intervals - Castano's patterning is always completely symmetrical.

"Bass Ceremonial Robe: After Funeral Banner Han Tomb No.1 Changsha China" is somewhat less complicated. Its imagery is closely derived from the silk banner noted in its title, which was among China's most important archaeological finds. Borders surrounding a central image are a recurring motif in Castano's aesthetic: The serrated borders of "Bass Ceremonial Robe" enclose a red field, which encloses an irregular black area. The vertical 58-by-37-inch piece contains a T-shaped form with the same proportions and scale as the original relic; it's likely that Castano scanned and adapted details from images of the actual banner. A black bird in a red circle and other elements from the upper section of the banner are identical to the original.

It's important to note that the Han Dynasty banner was actually a shroud covering the coffin of an extremely well-preserved 2000-year-old female corpse. Stylized Han Dynasty forms decorate Castano's banner, and her materials list for the piece is simpler than usual: "calf hide, vinyl, silk, oil paint, acrylic paint and gold leaf."

"Persistence of Pattern: An Intimate Story of Cultures" is a rich and complex show by an artist with an exceptionally broad base of both technical and cultural knowledge. Castano is a Vermont artist with global experience and a distinguished career that began more than 40 years ago. By ferreting out the mysteries of her references and imagery, one also discovers a major contemporary artist in our midst.