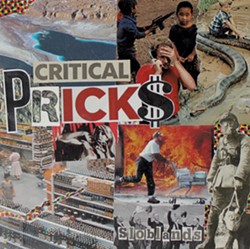 With a name like Critical Pricks (sometimes listed as CxPx), it wouldn't be out of the question to think that the Plattsburgh, N.Y.-based quartet is populated by a bunch of confrontational assholes. While confrontational certainly applies, there's nothing nasty or mean-spirited about Critical Pricks' songwriting. Quite the opposite, in fact.

Sloblands is a quick-and-dirty assemblage of songs that thrash at the intersection of a punk, metal and hard-rock Venn diagram. Guitarist Larry Dolan engineered and produced the album, which was recorded at Granary Studio in Morrisonville, N.Y. The band members rant and rage about misunderstood angst, sociopolitical dystopia and trashy life choices. They also sing about cider doughnuts. They know when to be menacing and when to be cheeky. Critical Pricks are most critical of apathy, as evidenced by their incensed outbursts and in-your-face attitudes.

The EP's opening track, "The Real Misfits," peels out and burns rubber. Its growling bass lick and overdriven, two-chord verses pay overt homage to classic-era punk. Lead vocalist Nicholas Dubay screeches, "Can't turn away whenever we're around / We're working hard here down on the underground."* They're grabbing the haters by the shoulders, as if to shake them out of their zombie stupor imposed by polite society.

The title track, "Sloblands," is an ode to working-class folk and fringe dwellers. It's considerably looser than most of the other tracks and a little bit grungy. A chunky, chucka-chucka guitar riff drives the verse into a chorus that starts out dreamy before it explodes into hysteria.

On their indictment of Big Pharma, "Too Much Dope," Critical Pricks see no difference between doctors and drug pushers: "Go to the doctor and make your deal / Get in the habit and take your pill." The chorus comes unabashedly close to sounding like the Offspring at their most radio-friendly.

"Whiskey and Snow" is a goofy nod to North Country culture. There's not much more going on than a short list of the region's finest offerings: maple syrup, cider doughnuts and whiskey — perhaps WhistlePig. Fully committed to local culture, the band announces, "If you don't like these things / Then that is just too bad." Seriously, who doesn't like a nice finger of rye on a cold, wintry afternoon?

Critical Pricks are aggressive and angry and express their ire unambiguously. But they don't resort to childish name-calling or go out of their way to be offensive, and they never misplace their zeal. They seem to have found a sweet spot between ardency and belligerence. And that sweet spot is likely populated with maple syrup and cider doughnuts.

Sloblands is available on iTunes. Critical Pricks play on Saturday, December 17, at Monopole in Plattsburgh.