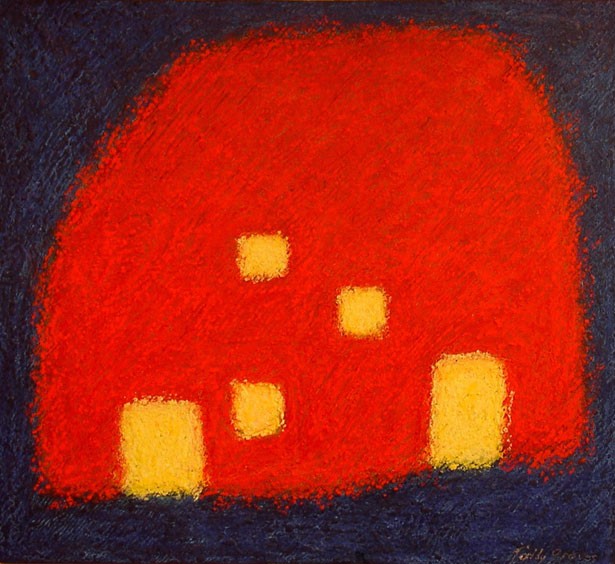 Spin Off," a group exhibition now on display at the Emile Gruppe Gallery in Jericho, features six painters and printmakers who regularly meet for mutual critique sessions, according to Gallery Director Emilie Gruppe Alexander. Their group was an outgrowth of similar sessions originally affiliated with Art's Alive. Those critiques must have been quite effective, since the artists - Tally Groves, Jerry Amici, Grace Nelson Lance, Marian Willmott, Robert Huntoon and Emily Bissell Laird - have all contributed strong works to their shared show. Lance's December exhibit at Emile Gruppe reportedly inspired the other five artists to fill the gallery in January - a month when it's normally closed.

Lance's 18-by-24-inch "Winterscape" is the show's snowiest scene. The silkscreen relies only on white, pale blue and delicate black lines to describe the setting - a tangled stand of trees next to a snowy field. Other Lance images are essentially abstract. A pair of 7.5-by-11-inch monoprints, "Rain and Oak" and "Camouflage Leaf," are both chaotic color fields with a leaf print tucked into the image. Lance is a versatile colorist, equally strong with a limited palette or a vibrant one.

"Orange Barn" by Talley Groves is a childlike image with a very unchildlike surface. She uses oil paint stick on wooden panels to create lively textures across each piece. The barn in Groves' 19-by-21-inch piece is red-orange on a dense blue-black background. Fuzzy yellow squares and rectangles in strategic locations add to the barn's mass. The work "Red Barn" features a slightly lighter background and an oversized white crescent moon at the right edge.

Emily Bissell Laird also employs a crescent moon - hers hangs over two dark hills in a cerulean-blue sky in "Conception," a 20.5-by-11.5-inch vertical painting. An open doorway in the lower half of the painting casts yellow light into the foreground. Laird's 22-by-15-inch "Lake Lights" is an illustrative image with six foreground flowers framing a full moon in a night sky. She nicely modulates her moonlight and includes interesting background details - apparently village lights under a distant mountain.

Hinesburg artist Marian Willmott notes in her artist's statement, "I have a small press in my studio and approach monoprinting in an exploratory manner, utilizing its immediacy and experimenting with ghosts and multiple layers." The effectiveness of that approach is confirmed by her pieces in this show. Willmott utilizes translucent colors and varied visual textures in objective abstractions that often include female torsos.

"Universal Mirror" is a 13-by-16-inch monoprint with a nude torso behind a netlike screen in the left half of the image. A simplified abstraction of the figure appears at right. Willmott's colors range from rich sienna to turquoise. The 16-by-20-inch monoprint "What There Is to Know" is a stronger, clearer image with the female form at right and a biomorphic abstraction at left, layered over a watery landscape. The chromatic harmony is similar to that of "Universal Mirror," but the visual textures are more complex.

Amici's 30-by-24-inch "Bicycle" is a photorealistic oil on canvas focusing on the front of a white bike frame in white negative space. The background seems to be a cooler white, the bicycle a little warmer. Chrome details in the bicycle are essentially variations of gray; thus, Amici's harmony is nearly monochromatic. Just a few red and blue details, such as a decal on the front of the frame and a red dot on the gearshift, spice up the dominant whites and grays.

A large selection of paintings by 20th-century artist and educator Emile Albert Gruppe (1896-1978) - the gallery's namesake - are also on display. The opportunity to view his distinguished New England landscapes is another reason to visit the gallery, even in snowy January.