How one Burlington couple chats up the chippies 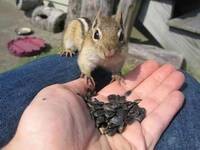 Sound like dastardly characters in a rollicking pirate tale?

Not quite. Little Girl, Redbottom, Xena, Scaredy and the others are members of Tamias striatus, a.k.a. the Eastern chipmunk family. If you can use the word “family” for highly autonomous creatures that barely tolerate mating season and push their own offspring out of the burrow real fast.

Yet, at least eight of them gingerly coexist in a single, smallish backyard in Burlington’s South End. This lovely residential oasis, thoughtfully planted with a variety of trees, shrubbery and perennials and enclosed by a fence, technically belongs to Tom Hill and Barbara Collins. But, as far as “the chippies” are concerned, the fiftysomething humans are simply tall creatures that frequently emerge from their back door bearing peanuts, sunflower seeds or other snacks. Why, the diminutive inhabitants have even trained these gentle giants to feed them right out of their hands, and to build tiny way-stations at convenient intervals around the ’hood.

How did they do it? The chipmunks aren’t talking, so we turn to the humans for their side of the story.

“I started feeding them about four years ago,” Collins begins. “One day a baby chipmunk showed up on the back steps and seemed really curious and friendly. I just decided on a whim to give him some food and see if he’d stick around.”

Her initial offering was a bit of bread with peanut butter, but that didn’t go over well, so Collins switched to peanuts . . . and later on added walnuts, dried corn, seeds and fruit. “I’ve since planted a hazelnut tree for them, too,” she adds.

“We named him Willy,” Collins says of her first chipmunk. “He stuck around all summer and then disappeared. It’s just the natural order of things — you never know what happens to them.”

Collins and Hill assumed Willy was a particularly bold aberration and thought no more about it. Until the following year, when another chippie showed up — “the second week in June, which is when they get ‘dispersed’ by their mothers,” Collins notes. She explains that chipmunk mating season begins around mid-March. There’s a one-month gestation period, followed by another month of infancy in the burrow. After the babies emerge from underground, the mother watches over them for just a couple of weeks, setting up little nests around the yard “with food in them for each baby,” Collins describes. Then mom heartlessly pushes her children into the cold, cruel world.

From this year’s batch of offspring, Little Girl exiled one baby to a low stone wall near a back corner of the yard. “He sat there for a week looking really sad,” recalls Collins. “We called him Depressed Chippie.” But there can be no mama’s boys in the chipmunk world. Resigned, the little guy finally got on with his life.

Which lasts an average five or six years, according to Collins. She and Hill have become a fount of information on all things chipmunk. “We spend way too much time doing this,” Hill admits sheepishly. Besides field studies in their backyard, the couple has researched online and read books. To other chippie lovers, Collins recommends the provocatively titled Eastern Chipmunks: Secrets of their Solitary Lives. Written by Lawrence Wishner and published by the Smithsonian Institution, the comprehensive text laden with photographs is now out of print, but it might be found in used-book stores or — you never know — on eBay.

Collins and Hill named their second chipmunk Wally. “He got special treatment — he was allowed to come in the house,” she confides. “Wally was treated very well. But now that there are eight chipmunks in the yard, none of them gets special treatment.”

Instead, the couple content themselves with democratically placing bits of food in stone-wall crevices — “They have to compete with squirrels and birds,” Collins explains — and, sometimes, holding out peanuts in their hands for one-on-one feedings. At this point, most of the chippies are brave enough to approach even visitors, stuffing the proffered snack into their legendary chipmunk cheeks. But they’re not so brave that any quick movement doesn’t cause a mad dash to the nearest cubbyhole. “The most important thing is to be still,” Collins says. “It requires great patience.”

Hill has created little habitats around the yard — small structures of stones or logs — in which the chippies can scamper or hide from cats. Or worse, birds of prey. Chipmunks “are probably pretty popular dinner for owls, hawks and crows,” Collins laments. “Sometimes, really early in the morning, I see seagulls just coasting over the neighborhood to see what didn’t make it through the night.”

When the coast is clear, a chippie — usually the bossy Little Girl — may perch on an upside-down pot that Hill and Collins have placed on the back steps of their house. For some reason, it’s a coveted spot. “Whoever’s most dominant gets to sit on the pot,” Hill explains.

On a recent warm summer morning, Little Girl — or maybe it’s Xena — is sitting on a nearby boulder and chattering agitatedly. In fact, her vocalizations grow increasingly urgent. “It gets quicker and more intense if there’s a cat in the yard,” says Collins. “But often it’s just because she’s mad at another chipmunk.”

Meanwhile, one of the triplets darts up the rose trellis — apparently his new, high-rise home. Most of the chipmunks go underground, Collins reports, where they maintain tidy, separate quarters for sleeping, storage and pooping. Little Girl burrows under the hostas. Scaredy alternates between hiding under the garage — carefully avoiding a family of skunks — and a bulkhead beneath the house. Xena lives in an undisclosed location behind the fence. The neighbors, Collins says, do not feed her.

“Some people believe you shouldn’t interfere with nature,” she notes. “But I don’t think the chippies are dependent on us for food. They disappear sometimes for weeks or months.”

These miniature critters are pretty darn cute and lovable. But what Collins admires most about them is “their sensitivity, consciousness, awareness — whatever you want to call it,” she says. “Their ability to sense what’s a threat and their ability to seek out a relationship with people while still maintaining their defenses against predators.”

She’s also intrigued by the way interacting with the chippies affects her human visitors. “People of all different types suddenly regress back to a certain part of their childhood,” Collins says. “It’s a nice part of people, the inner child that wants to feed a chipmunk.”