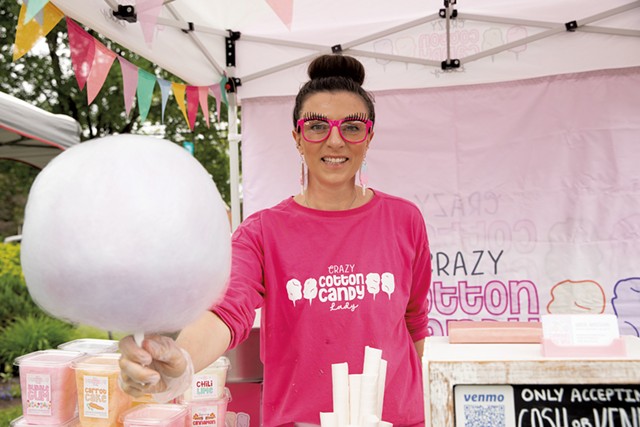 At Waterbury's first farmers market of the year, in early June, the Crazy Cotton Candy Lady's booth was eye candy in itself. The owner, Kristie Armstrong, wore chunky pink protective glasses with fake eyelashes glued to them and a hot pink shirt that perfectly complemented one of the day's top flavors: pink grapefruit. Her booth's pastel décor framed her as she stood in the center, spinning a lavender cotton candy cone as big as the head of the child who had ordered it.

The Williston resident launched her business a year ago with just $4,000, after spending more than a decade as a graphic designer. Now, with her second summer in full swing, Armstrong, 35, spends weekends and evenings traveling to fairs, festivals, farmers markets, corporate events, and birthday and wedding parties all over the state.

"It's a giant puffball of air and sugar and beautifulness. It's the perfect treat to trick your kids." Kristie Armstrong tweet this

Armstrong estimates that she has created more than 100 flavors. She brings a different six to each live spinning event, making sure always to have a pink and blue choice so she won't "get in trouble with the little kids," she said. But don't expect the standard options.

"My name isn't the Normal Cotton Candy Lady. It's the Crazy Cotton Candy Lady," Armstrong said. "You can get normal flavors anywhere. You come to me if you want to be a little crazy and get some crazy flavors. It's OK to step out of your comfort zone."

"Cotton candy makes everything just a little sweeter and a little happier," Armstrong said. "I ate a lot of cotton candy before I started this, and I just wanted to try every flavor."

That taste for adventure pushed Armstrong to make her own cotton candy sugar instead of buying the cheaper, more limited pre-flavored options. She takes large, granulated sugar crystals; blends in oils, extracts and food coloring; and then cures the resulting blend for five to 10 days, depending on the flavor combination.

To make the cones, she uses an event cotton candy machine, which is smaller than the classic model and allows her to make smaller batches and even mix two flavors on one cone. She takes one tablespoon of her cured sugar blend and pours it into the center of the event machine, which heats up to 250 degrees, melting the sugar almost immediately. Because of the velocity at which it spins, the cotton candy shoots out in strands that are thinner than human hair. Armstrong works quickly to catch it and shape it into a sphere on a classic paper cone.

Always inventing new flavors in her Williston home lab, Armstrong also takes custom orders, for which she'll tackle anything her clients dream up.

Her gourmet treats extend beyond the cone. She offers cotton candy cakes; "sparkle drops," which create a magical fizz when submerged in drinks; and gift boxes of cotton candy that can be used as party favors. The latter are almost too pretty to eat: The watermelon flavor is half pink and half green, with edible candied watermelon seeds sprinkled on top. 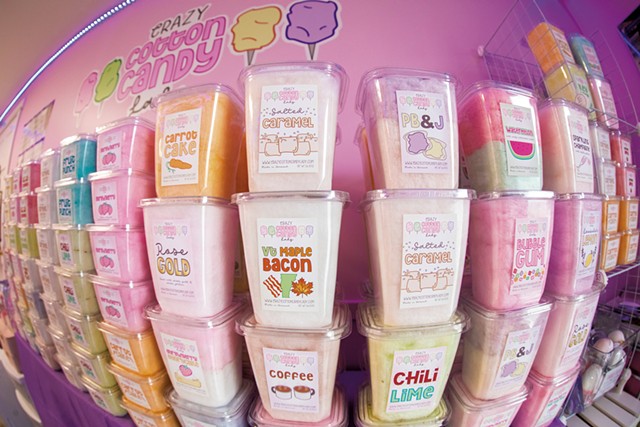 Because cotton candy is very sensitive to heat, moisture and sunlight, Armstrong works in a dehumidified room with a blackout curtain. She can't spin live outdoors in the rain.

Her favorite part of the creative process is taste test day, she said, though not every flavor passes. Pizza was a flop, and she's learned that lavender is a tricky science.

"Lavenders are really overpowering. It can taste like soap. You don't want cotton candy that tastes like soap — how devastating," said Armstrong, who has perfected her lavender concoction by using significantly less flavoring relative to sugar. She's also learned that certain flavors, such as banana, can illicit polarized "strong feelings" from customers.

"That's the magic," Armstrong said. "It's a giant puffball of air and sugar and beautifulness. It's the perfect treat to trick your kids — and less calories, too."

Cotton candy was actually invented by a dentist, Armstrong continued, "to be a low-sugar alternative to fair food, like a candy apple." She learned that in elementary school when she did a project on her favorite treat. 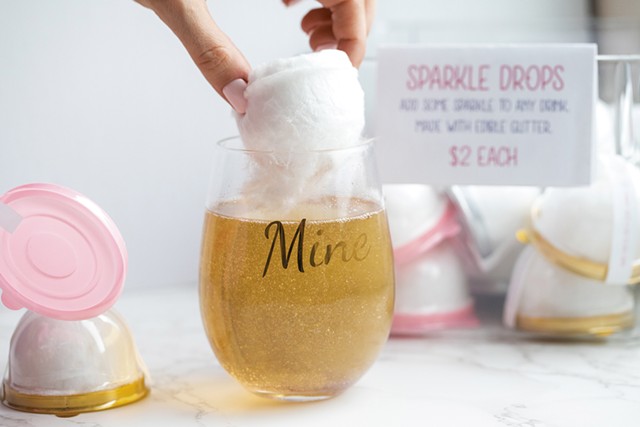 Another misconception she combats is that cotton candy is just for kids. Armstrong wants her customers to know there's no age limit on loving the sweet treats she spins.

Armstrong's own love for cotton candy goes back to her childhood. Growing up in Northfield, she couldn't wait for the town's annual Labor Day celebration, when she would spend all of the cash she'd earned raking lawns on cotton candy and rainbow ice. The vendor whom Armstrong nicknamed the "Rainbow Ice Lady" became her role model.

"When I was 7 years old," she recalled, "I told one of my little buddies that I wanted to make cotton candy and I wanted to do all crazy flavors, just like the Rainbow Ice Lady ... and I wanted to be a crazy cotton candy lady." Her friend teased her and called her a "carny," but the sugary seed of an idea had taken root.

It was a sweet escape from the insecurities that Armstrong faced in school. As a child, she lived with a petit mal seizure disorder, which presented as staring spells. Less was known about epilepsy three decades ago in her small community, Armstrong said, and the school system put her in a classroom for mentally disabled students. She eventually outgrew the childhood epilepsy, but school remained an uphill battle, as she was diagnosed with dyslexia and attention deficit hyperactivity disorder.

Armstrong's mother also lived with epilepsy and suffered exhaustion from an excessive medication dosage. She gave her daughter steadfast support, Armstrong said, encouraging her not to dwell on what other people thought. Her two grandmothers gave her the same guidance.

"You don't need to tone yourself out so that people accept you. The right people will accept you for the way that you are," said Armstrong, who now lives her life in full color.

She has almost as many colorful costumes as she has flavors, giving new meaning to the saying "You are what you eat." Her home lab has an array of sparkling, sequined pink slip-on shoes on the floor and a drawer filled with tutus. One of her favorite getups is her shimmering pink tracksuit.

"You can feel emotion when you see colors," Armstrong said. 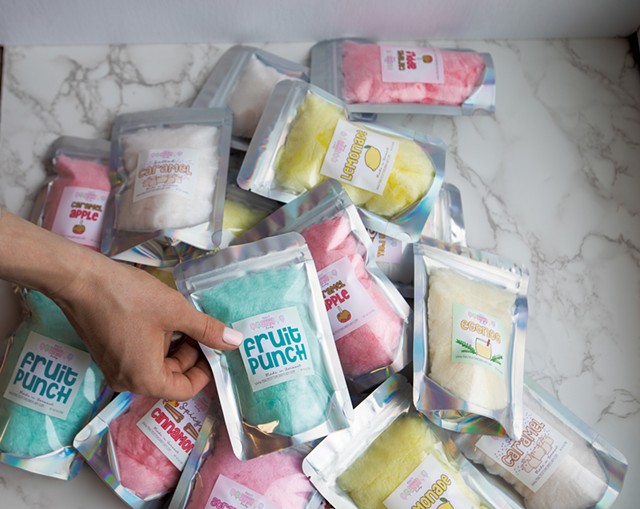 Last year, Armstrong found herself working at the Northfield Labor Day Weekend Celebration alongside the very same rainbow ice vendor who was her original muse.

"I got to tell her to her face, 'You are literally the reason that I am doing this. I wanted to be just like you,'" Armstrong said.

Armstrong herself has become a muse to the kids and adults who ask to take pictures with her at her events. One of her big "wow" moments happened last year, when she heard that a little girl had dressed up as the Crazy Cotton Candy Lady for Halloween.

"It's surreal. But it also makes me really happy to make kids happy," she said.

As Armstrong finished spinning the lavender cone at the Waterbury Farmers Market, the child who had ordered it stood on tiptoe, waiting with excitement. Armstrong held the puff of pale purple in the air like a torch and leaned over the booth to pass it to her young customer. At the instant of the handoff, both of their faces lit up with joy.

That moment is always the best part of her job, Armstrong said.