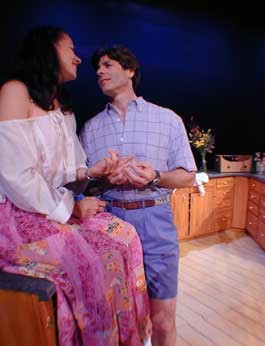 Dinner with Friends is the story of four well-fed Connecticut yuppies with a picture-perfect home whose lives seem ideal — until, between the main course and dessert with her best friends Karen and Gabe, Beth spills the beans that her absent husband, Tom, has left her for a much younger woman. The news is devastating to her hosts. Over the course of two acts that span several months, we hear the testimonies and arguments as Beth, Karen and Gabe — the philandering Tom shows up later — cut into the gristle of a very tough subject: sustaining relationships.

A second-rate theater company could easily reduce Dinner with Friends to a bare-bones dramedy, a weepy-yet-heartwarming story of suburban angst. But St. Michael’s’ soul-searching production of Dinner with Friends is a remorseless kick in the ribs — not just for people who have failed in long-term love, but for all couples. Under the passionate direction of Richard Keitel, the Playhouse has confirmed the play’s claim to the 2000 Pulitzer Prize.

Michael Mendelson and Robin Walsh play the doomed Tom and Beth, two lonely adults who have wasted more than a decade pretending to love each other. “Really, I was just being a good sport,” Tom says offhandedly, rolling his eyes as if to say, “See? Would you put up with this banal existence?” Walsh is moody and unpredictable as the allegedly frigid Beth, who sobs through the play’s introductory dinner, but is glowing happily a few months later, when she has met another man. When we see Beth and Tom in the bedroom — the one sequence they spend together — they start out talking politely but soon degenerate to screaming, throwing out accusations of betrayal and suffocation. In the heat of the moment, they have sex.

But Karen and Gabe are the play’s real protagonists. As Gabe, Steve Hendrickson is a gentle and ponderous middle-class father, consoling Tom even as he remains critical of his friend’s destructive choices. Sarah Carleton plays a reserved Karen; she can’t accept the idea of affairs and won’t listen to Tom’s side of the story. Evidence of their perfectly organized marriage shows up in the food they make — chicken marinated overnight, exotic sauces with dozens of rare ingredients and a wine for every occasion. But Tom’s indiscretions hit the couple where it counts: When Karen asks Gabe if he has ever reconsidered their marriage, Gabe doesn’t want to discuss it. Their bond may be more secure than Tom and Beth’s, but as people, they may not be as honest.

Works like Dinner with Friends are less likely to be performed since America began worrying more about terrorists and less about the crisis of middle-class contentment. In its original production, the play rode the same neurotic wave as American Beauty, Ghost World and Magnolia, all of which concern characters who should be happy but are not. In 2000, when Tom said, “I was losing my will to live. Isn’t that dying?” America wasn’t at war.

If Margulies’ masterpiece survives the test of time to become not just a Pulitzer-winner but a classic, it will be thanks to productions like the Playhouse’s. Dinner with Friends is not about infidelity or the tired repetition of long-term relationships. Rather, it’s about determining what we want in life, and how much we’re willing to risk to get it. Is Tom entitled to become a middle-aged boy-toy? Or should we root for Gabe and Karen, because — as we discover — they are sacrificing satisfying sex and honesty for the sake of their children?

In one of the play’s most crushing moments, Gabe tells Tom about how his kids play with Legos – they build an enormous structure and then, without pausing to revel in their genius, violently destroy it. To see his own children recklessly ruin their creation makes Gabe wonder if Tom’s affair isn’t an inherent part of human nature. Is Gabe himself immune? Is he missing something?

Like The Big Chill and The Anniversary Party, Dinner with Friends will endure because its characters are so human. Their silences are hollow and wrenching. Their words are sometimes careless, their flaws formidable. They are so remarkably like us — the audience — that by the second act, their witty one-liners have lost much of their humor. By the time the curtain drops, all comedy is gone. We’re left with two survivors facing the uncertain future of a tired, unexamined love. m