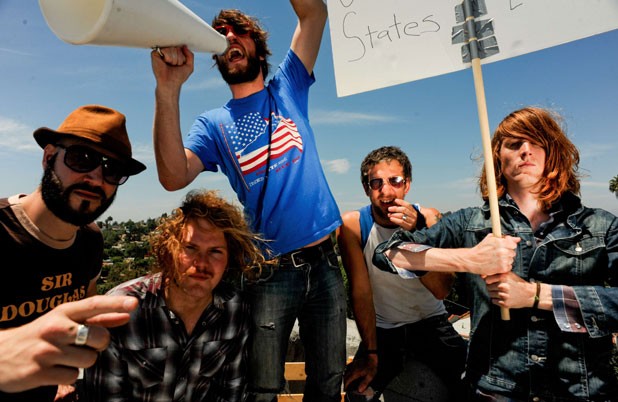 When Seven Days called These United States’ front man Jesse Elliott to get the story on the band’s new self-titled record, we assumed we’d chat about the album’s themes. Then, while we were on the phone, Elliott witnessed a minor car accident. Weird, right?

It turned out to be an illustrative coincidence. The alt-country band’s fifth album is filled with stories about, as Elliot puts it, “people and places and all the wacky shit” that makes up life in, well, these United States. Talk about a happy accident. Well, for us, anyway.

Here’s our conversation, in advance of TUS’ upcoming show at the Monkey House on Wednesday, June 20.

JESSE ELLIOTT: I'm good. There's actually some kind of strange cosmic overlap here, because I'm driving to go see a band that I haven't seen in about 10 years that's from Burlington, Vt.

JE: They’re called Phish. Have you heard of those guys?

SD: Believe it or not, I have. So are you a Phishhead?

JE: I was a pretty big fan back in the day. But I went on a different musical path for a long time. I give them a lot of credit for introducing me to a lot of other stuff and turning me in a lot of different directions and genres. I guess they’re a gateway band or something. They also just seem to be all about the right shit.

SD: I’d agree with that. I mean, Mike Gordon drops in on this local honky-tonk night all the time. It’s at a tiny little café called Radio Bean.

JE: It was amazing!

SD: Let’s talk about your music. The new record is supposedly a concept album. So what’s the concept?

JE: The whole idea of a concept album is funny to me, because if you’re making an album, it seems like there has to be some kind of concept behind it. If there’s not some kind of idea or musical motif that ties everything together, you might as well just put out a single or an EP. So, to me, it just seems natural that that’s what the album format is for: an idea you want to unfold over the course of 12 or 15 songs.

This album is self-titled, and we were originally going to call it Maps, which is one of the songs. But the whole thing is just about people and places and all the wacky shit that happens in our little American corner of the universe. So at a certain point, Maps seemed kind of redundant as a title. If it’s just about these United States, let’s just make that the … Oh, jeez! A big truck just hit a little truck!

SD: Whoa. Is everyone OK?

JE: Yeah. It was a slow-motion thing, but I was a little surprised by it.

SD: That’s an interview first for me.

JE: Me, too. But when you spend enough time on the road, you’re bound to see some shit.

SD: And then write about it.

SD: Speaking of the name, do you ever run into any preconceptions about the band because of it?

SD: You’re the primary songwriter, but you take a lot of input from the rest of the band on your lyrics.

JE: I do, mostly because there are so many of them. It’s like, if you have 15 kids, it’s OK if one of them gets run over by the combine or something. There are 14 others and they’ll all take care of each other and maybe they’ll learn some valuable lesson from the combine incident.

SD: Yeah. Stay the fuck off the combine.

JE: Right. I guess for me it’s really crucial to put everything you can into each song, but also to be detached about it. There’s no way anyone else in the universe could possibly care about it as much as you do. And that’s OK, in the sense that if you can detach yourself from it, it becomes a healthier creative process when you work with other people and have disagreements. I like a good, creative, bare-knuckles fight.

JE: Ooh. I’ll be honest with you. We just found out we’re going to open for Willie Nelson in a couple of weeks. So I’m going back through my serious Willie collection and marveling at what a crazy, beautiful, humorous songwriter he is. My grandmother passed away a couple of months ago, and I was really close to her. I had the task of getting her whole music collection together. And one of the things I found was this amazing old vinyl of Stardust. So I’ve been listening to that a lot for the last couple of weeks.

SD: I was afraid you were going to say his reggae record and I was going to have to hang up.

JE: [Laughs] I don’t know that one, to be honest. I do know the new single that he released with Snoop Dogg and Kris Kristofferson. It’s called “Roll Me Up and Smoke Me When I Die.” Do you know that one?

JE: You should look it up. Snoop doesn’t rap. I guess he sort of croons. So it’s a pretty amazing thing to behold.