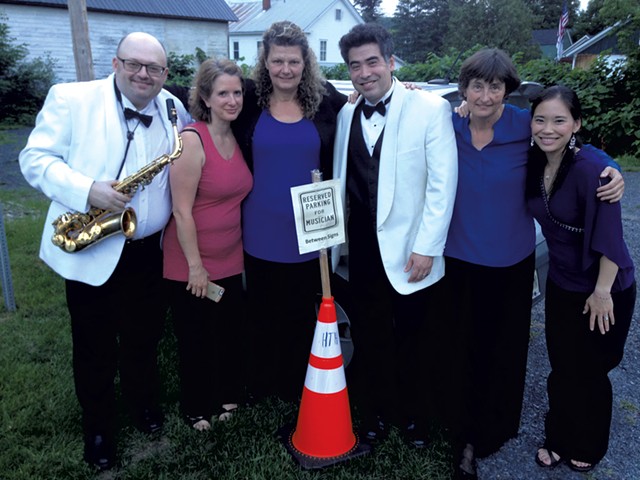 The title of an upcoming concert, "Tyranny and Hope: Russia's Lost Voices of the Future," may bring to mind the current U.S. president and the mass demonstrations against him. In fact, as the Craftsbury Chamber Players will convey in two concerts this weekend, actual tyranny is much worse.

CCP musicians will play a series of miniatures by Russian composers dating from 1900 through the 1940s, interspersed with readings from period texts. The program opens with a poignant tsar-era work by Alexander Glazunov. Otherwise, these works were written under the watchful eye of Joseph Stalin, who began his rise to power in 1922. These composers were struggling to express new ideas without inviting their own deaths.

Only one name in the bunch might be familiar: Dmitri Shostakovich. The man and his music miraculously survived despite constant denunciations for his "formalism" — Soviet authorities' term for music that didn't sufficiently express the uplifting narrative of social realism. By contrast, Arthur Lourié, Nikolai Roslavets, Vladimir Deshevov, Leonid Polovinkin and Mieczyslaw Weinberg were purged from the repertoire during Stalin's reign.

Their names drew a blank even for Frances Rowell, the CCP cellist who organized the concert and will play the works with her violinist sister, Mary Rowell, and pianists Inessa Zaretsky and Marcantonio Barone. At Seven Days' request, New York City-based Zaretsky emailed current students at the Saint Petersburg Conservatory in Russia to see if these neglected composers had returned to the curriculum. The students had never heard of them.

So who has? East Calais author M.T. Anderson came across their names while researching his book Symphony for the City of the Dead: Dmitri Shostakovich and the Siege of Leningrad (2015). After Anderson sent the CCP a fan letter, Fran Rowell asked him for suggestions of forward-thinking experimental music that had been lost. From the list of composers Anderson sent, and the readings he selected, "Russia's Lost Voices of the Future" (as the concert is subtitled) took shape.

"I'm learning so much I can hardly believe it," enthuses Rowell from New Jersey, where she lives when not performing summertime duties as CCP's music director. The public has learned a lot, too. Connell Gallagher, president of the CCP board and a former librarian, organized a series of pre-concert educational events at local libraries.

Concert audiences will benefit, as well; the author and musicians have curated a "thick description" of an era.

As Anderson notes during a phone call, that era was one of radical innovation. "It was a medieval country trying to leap into the 20th century," he says. Deshevov's "Rails," from 1926, evokes the rhythmic sounds of a speeding steam train. Shostakovich's 1929 incidental music for the futurist play The Bedbug, written by his friend Vladimir Mayakovsky, nods to Western jazz.

As the terror took hold and nighttime visitations from the KGB increased, the playfulness receded. In "Legend" (1930), Roslavets toned down his earlier futurist predilection for atonality and dissonance. Two of Polovinkin's four miniatures from 1933, "Les Attraits" ("The Attractions"), are based on folk songs to please the authorities.

Rowell describes the pressure the composers must have experienced. "You're writing this music and it's OK, and then it's not OK. You're never clear from day to day where you're going to come down."

As Anderson puts it, "These are creators who risked their lives for music."

One work on the program is contemporary. In 2012, pianist and composer Zaretsky wrote a trio of chamber operas based on the brief, absurdist writings of Russian author Daniil Kharms, who died of starvation at age 37 during the Siege of Leningrad. The CCP will perform one, "The Man in a Black Coat," and Anderson will read the short story, which depicts a seduction scene interrupted by a KGB operative.

Zaretsky studied at the Moscow Conservatory Music College and left Russia at age 18, in 1981. "This is what my grandparents lived through," she says of Kharms' story. The KGB took her grandfather away in the night, and he survived only because Stalin died less than three months later.

"I truly do know — not as much as my grandparents, and not as much as my parents — but I know what it's like to live where your media is suppressed, where you can't get information. I was told not to repeat anything outside the house," Zaretsky recalls.

At the suggestion that things were surely worse in the Soviet Union than they are now in the U.S., Zaretsky sounds a note of warning. "All these worse things, they all came from what wasn't so bad before."

"Tyranny and Hope: Russia's Lost Voices of the Future," concert by the Craftsbury Chamber Players with readings by M.T. Anderson, Saturday, May 13, 7:30 p.m. at Highland Center for the Arts in Greensboro; and Sunday, May 14, 3 p.m. at First Baptist Church in Burlington. craftsburychamberplayers.org