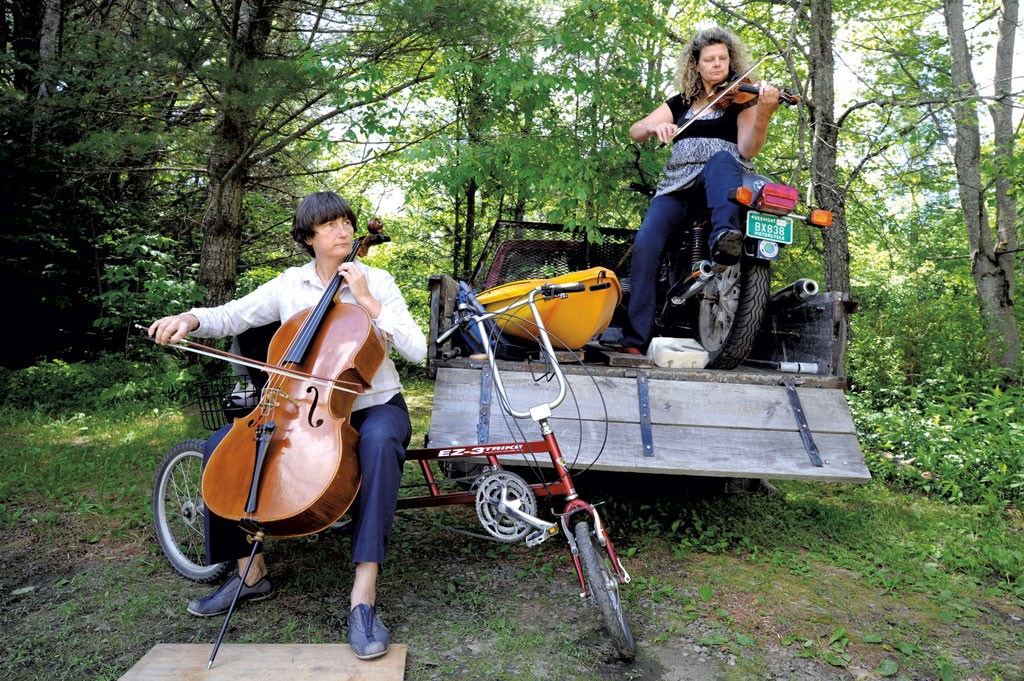 Trying to phone Frances and Mary Rowell, the musician-sisters who form the core of Craftsbury Chamber Players, is a revealing process. There is no cell coverage at Mary's Craftsbury house, where Fran, the cellist, is staying for the summer. Fran emails that she can drive down the road to the home of their father, Morris Rowell, 83, who has a working landline. Meanwhile, Mary, the violinist, is driving back from a gig in the Northeast Kingdom. She knows a spot with cell coverage an hour up the road, she manages to convey through crackling static.

Given the remoteness of the Rowells' location, it's something of a marvel that one of Vermont's premier chamber-music festivals comes together there every summer. Musicians come from around the country and the globe to stay at Morris' seven-bedroom house — where he cooks their dinners — and play six Wednesday concerts at the University of Vermont Recital Hall in Burlington. They repeat each program on Thursdays at the Hardwick Town House, and offer free afternoon mini concerts for children in both locations.

While some Vermont festivals — such as the Marlboro Music Festival — offer musicians marketing and renown, the Craftsbury Chamber Players have a different draw: friendship.

"The purpose of this group is people," declares Fran of the festival cofounded 50 years ago by the Rowell sisters' stepmother, pianist Mary Anthony Cox. "People who love to play together, people who love to come hear music. It's this network of music lovers that makes [the festival] viable."

That has remained a constant through the Players' recent changing of the guard. Cox retired from running the festival last year, at the age of 82. Fran, 55, is now music director — though she consulted with Cox on this year's programming in minute detail.

The new executive director is Northeast Kingdom native Hal Parker of Glover. Trained in choral singing, he recently returned to the area after a 20-year international career in conflict mediation.

"It's sort of a family business," Parker says of the festival, adding that he "vividly" remembers attending his first Players concert in 1972. "This is a generational shift."

The Players were founded when summer residents of Caspian Lake invited Ann Rylands, a Juilliard-trained violinist, to start a chamber fest in the area. Rylands brought along her sister, cellist Mary Lou Rylands, and pianists Allan Birney and Cox. The group gave their first concert in 1965 in the Sterling College dining hall to an audience of 35, according to Fran.

At the time, the Rowell sisters were 5 and 6 years old. Their mother, Carol, a pianist who had introduced her daughters to music, was "beside herself" that professional musicians had arrived in the area, Fran recalls. For the girls, the concerts were a revelation. "It was the first time we saw real people — not on TV — play this music. They were attractive and funny; they'd laugh."

By the time the girls' mother died in 1973, Cox had become a mentor to both sisters, hosting them in her New York City apartment during their weekly visits to study at Juilliard, where both later earned bachelor's and master's degrees. Cox, who taught for nearly five decades at Juilliard, eventually married Morris.

Mary has played with the Players every year since 1979, Fran since 2005. Meanwhile, both have pursued ever-expanding careers. Fran, a detail-oriented person with an efficient haircut and a ready business card, lives in New Jersey, where she plays with the symphony orchestra and teaches at Montclair State University.

Fran has a special interest in bringing children to music. At a concert at the Pierson Library in Shelburne this spring, she and Mary played the theme from the Harry Potter movies to a group of riveted elementary schoolers and shushed toddlers. Next up was a work Fran wrote to accompany a reading of the children's book The Fiddler of the Northern Lights, by Vermont author (and the sisters' cousin) Natalie Kinsey-Warnock.

Fran comments that "from the very beginning [of the Players], there was this sense that you gotta get the kids — you needed to give them access to this." Instead of using the afternoon concerts to introduce music written for children, such as Saint-Saëns' "The Carnival of the Animals," the Players simply preview that night's program. "They get it," Fran declares. "They're closer to nonverbal communication than adults are."

Mary, meanwhile, has maintained a New York City-based career as a genre-bending violinist — a role that goes well with her six-foot stature and unruly mass of blond corkscrew curls. She has played violin on two albums of Nonesuch Records' Tango Project; cofounded the "post-classical" chamber group ETHEL (which she left in 2011 for health reasons); and joined composer Eve Beglarian to form BRIM, a duo in which she plays electric violin. With Beglarian, Mary recently bought a house in Brandon to reduce travel time to New York and to Middlebury College, where she is an affiliate artist.

Though she plans to scale back her New York life, Mary recently joined four trombonists there to form V&T (for "violin and trombones"). The unprecedented combo has successfully commissioned a string of contemporary composers from Mary Ellen Childs to Mark Stambaugh. And every holiday season, Mary works as concertmaster at Radio City Music Hall's 200-plus concerts over two months, playing more than half of them.

The violinist has also gigged with a host of pop icons, including Joe Jackson ("He called me up one day in New York"), Madonna ("She never talked to us") and Sheryl Crow ("She was so nice to work with").

Mary has been a strong influence on Craftsbury Chamber Players' adventurous programming. The only time she plays classical music is at the festival, she admits; and, if she had her way, its programming would include more new composers. This season, Mary suggested mixing up the usual roster of piano and strings with saxophonist Chad Smith, who will play a 1995 sonata for alto sax and piano by Takashi Yoshimatsu in Concert 2. She also proposed Marc Mellits' Spin (1998), for violin and piano, which she'll play between the Beethoven and Bach in Concert 5.

"Always the middle piece was contemporary," says Margaret Ramsdell of Craftsbury Common of the Players' concerts, of which she's a longtime attendee. "It always took me a while to get my head around it. Now I've learned to appreciate the middle piece."

Bunch has been a Player since Cox brought the young Juilliard viola student up for the summer of 1996. "I played those two weeks and immediately fell in love with the festival and the setting and the Rowell family, and I haven't missed a summer since," says the musician and composer, now based in Portland, Ore. The chance the Players affords to play "with people you've gone to battle with before," Bunch says, makes the festival stand out among the many he attends on the summer circuit.

Bunch took up bluegrass fiddling after hearing the Rowells' brother Dave's Vermont band, the WDEV Radio Rangers, and went on to found the New York-based bluegrass band Citigrass. Its members will reunite with Bunch at the Players' season-opening free concert on the Craftsbury Common. "It's a mix of traditional bluegrass and folk music, plus some wacky covers of pop tunes," promises Bunch.

That adventurous spirit has helped the Players attract and hold the loyalty of community members, whether versed in chamber music or not. Cornelius Ulman retired to Craftsbury in 1996 after a 36-year career at the Wall Street Journal. He had heard little classical music performed live before his first Players concert in '97, and "was amazed to hear such wonderful music," he recalls. Ulman became a regular concertgoer and now edits the festival's program notes.

Classical aficionado Leslie Gensburg, who co-runs the Northeast Kingdom Classical Series in St. Johnsbury with Judith Rankin, cites the Players as an inspiration for the founding of her series. When the latter's 25th anniversary concert came up, she says, "We felt we had to have someone from Craftsbury Chamber Players."

As the Players' executive director, Parker hopes to increase attendance by 10 percent through the introduction of small changes, including an earlier start time (7:30 p.m.) and brief preconcert talks. Adjustments aside, the Players will keep coming to Craftsbury for the friendships they have made, the chance to play music they feel passionate about, and the postconcert mingling with audiences over coffee and snacks.

"What's been remarkable is how little it's changed," comments Bunch. "And I think that speaks to its longevity. There's a small nucleus of players who really understand the community and the value of what we're doing."

The original print version of this article was headlined "Northern Notes"