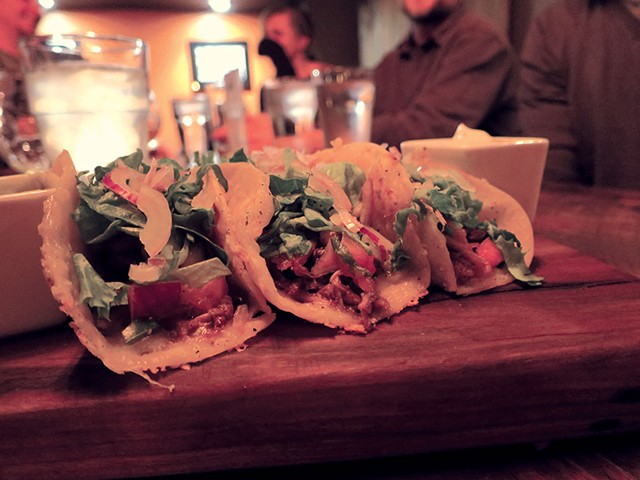 There's more to St. Johnsbury than meets the eye. The town has had its challenges — evidenced by some empty storefronts — yet a quirky community vibrancy prevails. You'll find it at the Fairbanks Museum & Planetarium, home to the world's largest collection of taxidermy hummingbirds, and at Gatto Nero Press, a printmaking studio and coffee shop. Then there's Catamount Arts Center, boasting area resident (and Grammy nominee) Neko Case as a member of its advisory council.

It's a town where you can shop for oil paints, organic produce, poultry feed and Carhartts on the same street. Also on that street: Kingdom Taproom, which deftly reflects the Northeast Kingdom's hardscrabble reality of life and a thriving creative scene. Its nine owners, locals hailing from different backgrounds, are united in the goal of helping revitalize St. J.

The 12-tap pub has been a community hub since its 2014 opening, gracefully straddling the line between quality and affordability. It hosts live music, showcases local comedians and encourages families to stop by, especially on Wednesdays, when kids are served for free. Bartenders pour brews from Stone, Founders and Citizen Cider — no Bud here — without a hint of snobbery.

The food is down-to-earth, too, featuring some local ingredients without making a big deal about it. Sandwiches form the backbone of the menu, from the vegetarian Green Machine — loaded with peppers, squash, sun-dried tomato, pesto and cheese — to the roast-beef panino. You can get 'em gluten-free. Or order up the decadent mac and cheese with tender pulled pork.

Mismatched bar seats and tables, cool art, funky Edison bulbs, and homey carpets make for a chill and welcoming vibe. You want a PBR, and your friend wants a bottle of hard-to-find Hill Farmstead saison? You want a charcuterie board with duck pastrami and smoked boar, and your friend wants a crock of cheesy Buffalo-chicken dip? You're both in luck at Kingdom Taproom.