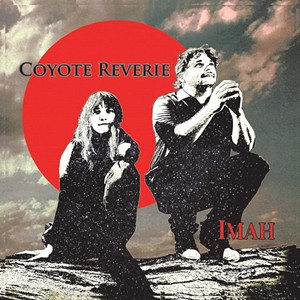 In 2021, the best reason to release a CD as opposed to going digital-only is to offer an extra with the disc. Newfane trip-hop duo Coyote Reverie, consisting of singer-songwriter Meadow Eliz and rapper/producer Stresselbee, included an eye-catching lyrics-and-art booklet with its debut recording, Imah.

Eliz's surreal collage work lines the booklet's pages, juxtaposing images of modern consumption — such as McMansions, factories and superhighways — with natural and cosmological iconography. The album itself is an enjoyable listen, but it's worth purchasing purely for the art.

Imah is a nostalgic blast through the '90s and early '00s. Stylistically, Coyote Reverie mine the cusp of the millennium for a sample-based hip-hop sound akin to A Tribe Called Quest. They layer a broad range of instrumentation in snippets and shuffle it together with propulsive beats.

Stresselbee's rhymes, along with guest spots from Vermont rappers such as Jarv and MC Humble, are intercut with languid hooks from Eliz that are reminiscent of Morcheeba's Skye Edwards. Or, even more specifically, of Cat Power's hypnotic guest spot on Handsome Boy Modeling School's White People.

Lyrically, the album explores the valley between the extremes of consumerism and natural awe evoked by the collages — but in abstract ways. There's certainly a sense of finality in the duo's verbose streams of consciousness. But what's coming to an end? Seemingly, life as we know it, if you can allow the hyperbole.

Coyote Reverie and their cronies Jarv, MC Humble and others have a lot to say. At just under 60 minutes, the record is a tad overlong. But it's hard to say where cuts should happen, since there's a lot to like throughout.

Particularly, Eliz's contributions are never unwanted. The choices she makes with words, emphasis and delivery convey compassion and comfort. Her vibe is: I promise it'll be OK.

The pair's preoccupation with science and nature comes through in song titles like "Kora Borealis," "Eye of the Storm" and "Definition of Dirt." "Piranhagon," a darkly toned (and cleverly named) lament for our sickly society, keeps the listener on edge as its clipped beats never quite reach a climax. The pair sees the world as a scary place ("It's a dark forest, kid / Keep ya torch lit") but offers some ways to cope ("Find a passion that fills you fully / That is what makes your reality").

"Achilles' Helix," another smartly titled track, bobs along with seesaw strings both plucked and bowed. Love borders on obsession in this down-tempo song.

In an argument for less being more, "Gravity Overture" — Imah's shortest song, at just under two minutes — might also be its most successful. A spaced-out atmosphere, plodding pace and Eliz's rhythmically symmetrical lyrics coalesce into a standout groove.

Coyote Reverie's first outing is grand in scale and scope. Their deep bench of affiliates includes rapper Mavstar and producers such as the Aardvarcheologist and Equal Eyes Records cofounder Rico James. Together, they have tapped into a rich vein of trip-hop worthy of exploration and augmentation.

Imah is available to stream on all major platforms.