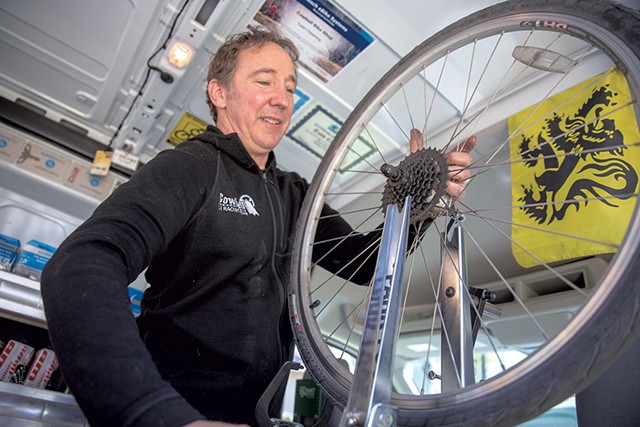 People try to bring their bicycles to mechanic Todd Chewning's residence all the time. They don't have to do that. "I come to your house or your office and tune your bike up," he tells them.

A recent Burlington transplant from New Hampshire, Chewning, 48, is the owner of Cowbell Mobile Bike Shop. He works out of his white Ford Transit van, outfitted with a workbench, tools, and racks of bike parts and accessories.

Some customers chat with him while he tunes up their bike. Others trust him to work on their rides while they're out. "Every day I meet different people," said Chewning, who's been a bike mechanic for more than two decades. "Connecting with my customers [and] building relationships is what I try to do."

It isn't uncommon for customers to have to wait up to three weeks to get their bikes tuned up at brick-and-mortar stores, said Chewning. He gets the job done on-site and in real time.

A native of Maryland, Chewning participated in BMX competitions, earning both wins and injuries, when he was in his teens. Later, while living in New Hampshire, he worked at Bike Hub in Norwich, Vt. When that business closed its doors, "I knew I had to continue to work for somebody, which is fine," he said, "or kind of just branch out and do it by myself."

Mobile bike shops are gaining popularity in the U.S., said Chewning. Many are franchises under the umbrella of Vancouver-based Velofix or Beeline Bikes, which grew out of the San Francisco Bay area.

For his part, Chewning belongs to a group of independent mobile bike shop owners with about 170 members, most in the U.S. On their closed Facebook page, he said, they discuss not just bikes but also topics such as accounting and point-of-sales systems.

"When you're in a business like this, you're not just a bike mechanic," he noted.

Cowbell is unique in Vermont, according to Todd Johnstone-Wright, director of the Adventure Sports Center at Saint Michael's College, where Chewning works part time. Johnstone-Wright encountered his first mobile bike shop while working in Scotland. He remembered thinking, Wow, that is an absolutely brilliant idea.

Johnstone-Wright knows people who work as bike mechanics out of their garage as a side hustle, he said, but Chewning is "making a go at it full time." With Vermont's robust mountain biking culture, there's more work than there are bike shops, he added. "I hope people can get their heads around how good of a resource [Cowbell] is."

Not everyone shares that market assessment; Chewning said he was cautioned early on by a business adviser who told him not to start his own venture.

But the bike enthusiast paid no heed and persevered. "I had a lot of really good people [who] helped me out along the way," said Chewning. His family supported him financially, and one of his clients outfitted his van.

Business was brisk in New Hampshire, where he still has regular customers, Chewning said. "People have a real connection with their bike," he explained. "If you fix their problem correctly ... then they want only that person to work on their bike."

Since moving to Burlington last August, he's been working on getting his name out in the community while maintaining his Upper Valley connections. Twice a week, he drives south to service bikes for customers in Norwich and the Hanover-Lebanon area. He'd like to cut those commutes to once a week, though, Chewning said, and participate more in the cycling community in Chittenden County.

In Burlington, his distinctive white van with the blue logo on its side attracts curious passersby, some of whom become his customers. Last month, Chewning tuned up about 22 bikes belonging to staff and family members of the law firm Dunkiel Saunders Elliott Raubvogel & Hand over two days. A partner who's an avid bike commuter had seen the van on College Street and approached Chewning.

Another customer intrigued by the white van was Lisa Yankowski of Burlington, who spotted it near Red Rocks Park, she said.

Yankowski usually has her two bikes tuned up at the Old Spokes Home in the Old North End. But working overtime has left her little time to run the errand, and she can only get one bike into her car at a time. So she made an appointment with Cowbell.

"Just standard tunes on both of these would be good," Chewning told Yankowski a couple of weeks ago, after assessing her bikes at home.

"Your chain is still in good shape on that one," he continued. "I'll give you a report."

Choosing a good spot to park his Ford is an important part of each job, Chewning told Seven Days. "It's got to be flat so that my tools don't roll off," he explained. "If it's hot, I need shade." During cooler weather, he shuts the door while he works and runs a space heater. To cope with summer heat, he plans to install a ceiling fan.

The interior of Chewning's van is decorated with training certificates, a squeaky bike bell shaped like the Japanese good luck charm cat called maneki-neko, a Flemish lion flag from Belgium from his brother, and a cowbell from Spain that a customer gave him. Belgium, Chewning explained, is the hotbed of cyclocross. His team, Cowbell Racing, plans to travel there in 2020 to compete.

A bike tune-up typically takes about 40 minutes, and Chewning follows a routine so he won't skip a step. He completes each task with a safety check and test ride.

That's how he discovered that the seat on one of Yankowski's bikes was loose. Attention to detail is key to being a good bike mechanic, Chewning said: "I take care of everybody's bike like it's mine."

He believes he inherited his knack for fixing bikes from his father, a mechanical engineer. And Chewning is passing the love of cycling to his own kids. His daughter belongs to Little Bellas, the Williston-based mountain biking and mentoring program for girls; his son attended a bike repair workshop that Chewning led in the Upper Valley.

Besides his work with Cowbell, Chewning teaches maintenance classes to student staff at the St. Mike's Adventure Sports Center, performs pre-checks for cyclists before events and provides mechanical support during rides.

This summer, he'll be on-site for several rides and races, including the Ranger Vermont gravel ride, Vermont Gran Fondo, Farm to Fork Fondo, the Dirty Prouty, the Green Mountain Stage Race and the Point to Point.

An avid cyclist, Chewning admitted that building a business takes away from his own riding time. But he isn't complaining. "I love my job," he said. "I really do."