COVID-19 Surge Has Pushed Hospitals to Their Limit, Hurting Patients in the Process 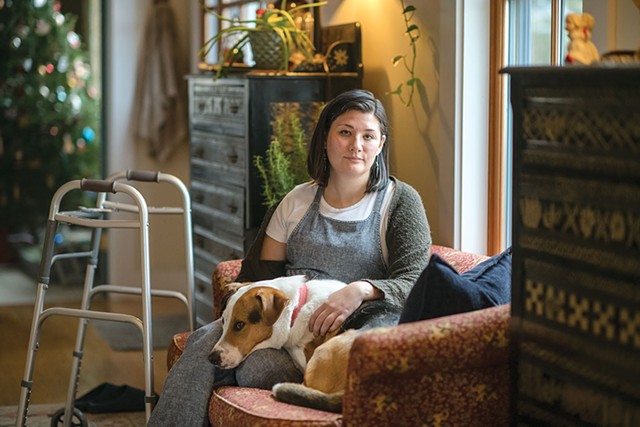 Keilani Lime of Vergennes was just two days away from surgery at the Alice Peck Day Memorial Hospital last week when she learned that it had been canceled.

The New Hampshire hospital, which is part of the Dartmouth-Hitchcock Health network, needed to free up beds and staff amid a surge of COVID-19 patients. That required postponing some upcoming surgeries, including a lumbar shunt procedure Lime has been waiting on for more than five months, in the hope that it will reduce pressure on her spine caused by a congenital defect and several painful cysts.

The pressure has become so intense that it's started to erode the base of her spine, and Lime recently started losing strength in one of her legs. With no idea when her surgery will be rescheduled, the 32-year-old now fears that the condition could worsen to the point where she can no longer walk on her own.

"I feel like the sand is falling rapidly through the hourglass," she said, fighting back tears.

Lime represents the collateral damage of the latest COVID-19 surge, which has clogged New England hospitals with mostly unvaccinated patients in recent weeks, pushing an already overburdened health care system beyond its capacity.

The ripple effects hurt many more people than just those infected. Hospitals have canceled hundreds of surgeries such as Lime's that require overnight stays. That includes roughly 250 procedures at the University of Vermont Medical Center and many more at hospitals across the border in New Hampshire.

The logjam means rural hospitals are finding it difficult to transfer patients who urgently need specialized care to hospitals that can provide it.

The surge in COVID-19 hospitalizations is expected to last through the rest of the month. "Getting through the holidays is going to be probably our most difficult time," Vermont Gov. Phil Scott said last week.

Hospitals in the region were strained long before the arrival of the Delta variant in the summer. Dozens of beds are empty because hospitals don't have enough nurses to staff them. Meanwhile, patients who put off tests or procedures during the early parts of the pandemic are now showing up sicker, requiring more complex care.

"We basically just keep trying until we either find a bed, the patient gets better or the patient expires." Dr. Josh White tweet this

Also, most hospitals have been unable to discharge patients to nursing homes, which are themselves at capacity. Up to 50 beds at the UVM Medical Center were filled on any given day this fall with patients who could otherwise be served elsewhere.

The surge has pushed the system to its limit. Vermont's hospitalizations have increased tenfold since mid-July. Last week brought several grim milestones: The state surpassed its single-day record for hospitalizations (92), ICU stays (31) and new daily infections (740).

On Tuesday, 77 people were hospitalized with COVID-19, including 19 in ICUs. Add that to the 70 or so people suffering from other medical issues who are also receiving intensive care, and only 11 of Vermont's roughly 100 ICU beds were available.

The situation was even worse in New Hampshire, where hospitalizations have also spiked this month. State data showed that just 5 percent of its roughly 215 ICU beds were staffed and available.

The region's two largest hospitals, UVM Medical Center and Dartmouth-Hitchcock, have responded by adding capacity wherever possible. But those moves have come at a cost. To create room for five extra ICU beds, for example, UVM shut down seven of its 22 operating rooms earlier this month, and only two have reopened. Dartmouth-Hitchcock officials said last week that they've been putting off certain procedures, such as hip replacements and heart studies.

The impact of these postponements goes beyond delayed care. Most insurance plans bill on an annual cycle, and many people awaiting procedures have likely already hit their yearly deductible, the amount they must pay before insurance will take over.

Lime's insurance company told her this week that she would need to meet her $5,700 deductible again if her surgery got pushed into next year. "[We] just bought a house," said Lime, who is the partner of Seven Days culture coeditor Dan Bolles. "We're living paycheck to paycheck, trying to make it work."

Hospital leaders say they are working with insurance companies to try to resolve such situations, but they've yet to find a solution.

Surgical patients aren't the only ones affected. Large hospitals have had to limit the number of patients they're accepting from smaller, rural hospitals, which typically do not employ specialty doctors best equipped to handle the most complex cases. Staffers at the smaller hospitals must then scramble to find somewhere else to send their sickest patients.

"Our providers are spending an ungodly amount of time on the phone," said Megan Sargent, the vice president of patient care services at North Country Hospital in Newport. "We're calling as far out as Connecticut and New York to get people transferred."

At Gifford Medical Center, a 25-bed hospital in Randolph, staffers have had to call up to 24 facilities with a single transfer request. As that process unfolds, physicians often consult with doctors at the bigger hospitals on ways to keep the patients stable until they can be moved.

"We start to MacGyver the situation," said Gifford's chief medical officer, Dr. Josh White. "We basically just keep trying until we either find a bed, the patient gets better or the patient expires."

Finding somewhere to transfer a patient is only half the battle. Hospitals must then find a way to get the patient there, an increasingly difficult task given that staffing shortages extend to emergency transport services. Hospitals say it can take hours to secure an ambulance, wasting precious time for someone in acute medical distress.

There's also the question of how patients sent to faraway hospitals can return home. "A lot of folks don't have family members that can pick up and drive three hours each way on a moment's notice," White said. Several times, Gifford has had to send a member of its chaplain volunteer service to pick up patients who were transferred to Albany, N.Y., with no way to get back.

Faced with the prospect of a long trip to an out-of-state hospital, some patients decide they'd rather take their chances at the smaller hospitals.

Dr. Michael Rousse, chief medical officer at Northeastern Vermont Regional Hospital in St. Johnsbury, said some of those patients have been so ill that it's been unclear whether they would have survived the trip. But others with far better odds have also turned down transfers because of the distance, only to die shortly afterward.

"That's a tragedy, because they could have been saved," he said.

State officials in Vermont and New Hampshire have taken steps to alleviate the pressures facing their hospitals, with limited success.

Vermont has helped pay for traveling nurses to staff nearly 120 beds at long-term care facilities so that there's somewhere to transfer patients who no longer need hospitalization. Most of those beds are now full.

The state is also trying to secure a federal contract that would provide more EMT and paramedic staff. But officials suspect that Vermont will not be high on the list, as other states have been harder hit.

In New Hampshire, state leaders have deployed up to 70 members of that state's National Guard to add staff at hospitals hardest hit by COVID-19. The service members will lend a hand on nonclinical tasks to free up frontline workers for patient care.

But officials in both states maintain that the best way to help the health care system is to vaccinate more people. The overwhelming majority of COVID-19 patients are unvaccinated.

Lime is now waiting for a new surgery date after last week's cancellation. Her neurosurgeon, who works at an Upper Valley private practice, has advocated to get her in as soon as possible but doesn't yet know when Alice Peck Day Memorial will resume overnight procedures. A spokesperson there said the hospital expects to perform most scheduled surgeries in the coming weeks but that the situation could change any day.

Lime fears that her prognosis could change, too. The development with her leg suggests that her condition is worsening faster than she and her neurosurgeon had hoped, so they have decided to install a shunt into her brain instead of her spine. The change won't get her into surgery any quicker, but it should provide faster relief. Still, it's riskier, which is why she hoped to address the problem before it reached this point.

As she steels herself for the prospect of brain surgery, Lime can't help but feel angry when she considers how she has been swept up in a largely avoidable crisis. She did everything she was supposed to do, from following health protocols early on to getting vaccinated as soon as she could. But because so many others decided not to protect themselves by getting vaccinated, she's left with no choice but to wait for the surge to subside.

"Their decision may put me in a wheelchair," she said.

The original print version of this article was headlined "Collateral Damage"