Dona and Patricia Bessette became so close during their six-decade marriage that they were "totally connected" in their daughter Linda's mind — Mom and Dad, Mem and Pep. She had long suspected that if one died, the other wouldn't be far behind.

A few years ago, Dona passed out at home, and Patricia, thinking he was gone, suffered a heart attack-like event known as "broken heart syndrome." They both landed in the hospital.

"She thought Dad was done, and she couldn't stand it," Linda said. Both recovered, though.

Yet, in the end, neither went long without the other.

Dona, 93, and Patricia, 88, died in their Hardwick home late last month after testing positive for the coronavirus. They left this life within 48 hours of one another, an ending that their son Cary "Bear" Bessette calls sad and sweet in the same breath.

"It's quite a love story," Bear said of his parents, who spent their entire lives in Vermont and would have celebrated their 68th anniversary two days after Christmas. It is people like the Bessettes — older, with underlying health problems — who are most likely to succumb to COVID-19, Vermont records show.

Cards and condolences are still pouring in from the offspring of the Bessettes' long-passed friends, the scores of families graced by their generosity and the caregivers whose efforts allowed them to live at home. "So many great laughs with them," one wrote in an online tribute last week. "Both beautiful souls. They will forever have footsteps in my heart."

Many of the people they touched never realized that Dona and Patricia were an unlikely match: He was a high school dropout, quick to reach for a drink or rely on a joke; she grew up in a household where the rosary was recited several times a day. It wasn't always easy, this budding love of theirs.

Patricia's father had even once suggested that she keep her "options open," doubtful that his daughter could ever make an honest husband out of Dona. And yet they made it work, right up until the end.

"They were meant for each other," Bear said.

Dona, born in Hardwick on September 4, 1927, dropped out of school after eighth grade and found work on an oil pipeline in Victory. He shipped overseas a few years later to serve in a tank company during the Korean War but returned to Hardwick in 1951 after his brother and brother-in-law were killed in separate car accidents.

"They were meant to be together." Cary "Bear" Bessette tweet this

Dona moved in with his widowed sister to help care for her young children and picked up a job shuttling mail between post offices. Each day, he navigated the stretched-out station wagon known as the "Hardwick Stage" to Montpelier and back, often taxiing people to doctor's appointments or shopping trips for a nickel a ride. He might even have taken your order for the liquor store, Bear said, "though you hoped it wasn't something he liked," lest it arrive unsealed.

Dona occasionally stopped at a bank in downtown Barre where a young woman named Patricia Murphy worked. One day, according to Bear, Dona asked a friend of Patricia's whether she might go on a date with him. When the message was relayed, Patricia replied, "I might — if he asked."

Patricia was a patient, selfless woman, traits that were tested in those early years as she dealt with "kids who were less than angels" and a husband who was "no saint," Bear said. But she knew how to hold her own. When Dona broached the idea of purchasing his family's farm after his father died, for instance, Patricia shot it down instantly. "I will not be a farmer's wife, and you will not be a farmer," she told him. And that was that. Years later, Dona would occasionally lament not making the purchase, only to have Patricia remind him that "you would have done it without me."

"They were always a couple that looked out for each other," said Lorraine Hussey, 92, one of Dona's oldest friends. "They talked it over. They were always together. They thought the same, and they acted the same."

Dona's youthful follies eventually gave way to more serious matters. He mastered the bygone art of recapping snow tires, helping frugal Vermonters eke a few more years of life out of their investment. He sold the refurbished tires out of an addition on his family's home while Patricia did the books. The business was so successful that Dona sometimes would have to work through the night to keep up with demand.

Before long, he was a full-fledged businessman: buying into and then owning a car dealership, building storage units, renting and flipping houses, and starting a school bus company that he later left to Bear.

"Dad was a mover," said his daughter Linda. "He could never sit still."

Patricia, meanwhile, ran the household. The scents of her labor filled the home nightly, from homemade spaghetti sauce to savory pork roasts to her famous baked beans, which she would usually pair with the "good hot dogs" — the ones with natural casing. 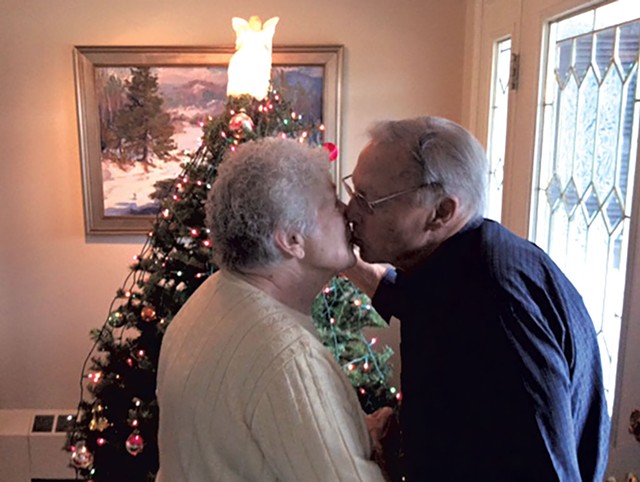 Sundays stand out the most in Linda's mind: Dona goading his litter out of bed with the sizzle of pancakes and French toast, the family abiding by a long-standing rule that whoever arrived in the kitchen first got his or her pick of the feast. Cramming into the car to attend mass at St. Norbert Church, with good behavior justifying a soda from the general store where Dona picked up his Sunday paper. Afternoons of board games and movies, or roaming around with neighborhood kids, squeezing every minute out of their weekend freedom before the flicker of the streetlights sent them home.

"It was a happy place," Linda recalled ruefully. "It was all good."

Family time was so cherished in the Bessette household that Dona started a regular reunion. He pushed to have it every year but was ultimately convinced that a biennial gathering would suffice. Starting around 1970, he and his four sisters took turns hosting the event, with aunts, uncles and cousins from all over converging on a single destination — by turns Vermont, Maryland, Virginia, Maine. The latest reunion was planned for this summer, until the pandemic arrived.

Dona and Patricia also took pride in helping others. Both were heavily involved in what Bear calls "do-gooder organizations'' — the Catholic Daughters of the Americas, the Knights of Columbus, Kiwanis, the American Legion, the Elks. Every Christmas, Patricia went down to the local market, handed the manager a list of groceries and asked to have a certain number of banana boxes filled. She would wrap them up and deliver them with Dona to families they knew were in need.

"Our house was open to everyone," Linda said.

Decades passed, the children moved out, and Dona and Patricia adapted to life as empty nesters. They bought property in Florida and spent more and more time down South, heading out for evening boat rides. They picked up golf and joined a league for couples. They played cards, traveled and doted on their grandchildren, who called them Mem and Pep, shortened versions of mémère and pépère, the French words for grandmother and grandfather.

But time, as it does, caught up with them. Crippling arthritis slowly ground Patricia to a halt. Parkinson's-related dementia caused Dona's memory to slip. Bear and Linda helped set them up with home caregivers whose initial tasks were just to run errands and do chores. That evolved into someone being at the house all day. Then all day and all night. In the end, the Bessettes had two people in the house around the clock.

Last month, Bear and Linda learned that one of their parents' caregivers had tested positive for COVID-19. Dona and Patricia started showing symptoms shortly after, and they spent the next week in separate rooms at Morrisville's Copley Hospital. Besides Dona's occasional fishing or hunting trips, it was the longest they had been apart since they wed.

When they were finally discharged the day before Thanksgiving, Linda could see how badly the virus was ravaging their already frail bodies, and she knew they were coming home to die.

For years, she had been having weekly dinners at her parents' house, sleeping over so that she could wake up the next morning to run errands with her mother or watch a golf tournament with her father. It hurt to see these two "bright sparks" in her life dimming. It hurt to know that she would soon not be able to bring them the Sunday paper or accompany them on their near-daily lunches at the Hardwick House of Pizza, where her parents were small-town celebrities, enjoying the pats on the back, the friendly waves and the Hey, how ya doin's.

This fall, Linda had the caregivers push together their hospital beds to resemble "their one big bed." And, for a brief time after they returned home last month, it almost felt like nothing had changed, as if it were just another Sunday morning before the sun peeked through the windows and the kitchen filled with groggy kids, just Dona and Patricia — Mom and Dad, Mem and Pep. The inseparable duo.

"They were just so happy to be home," Linda said. "Together."