Courtesy of the Red, White and Blue 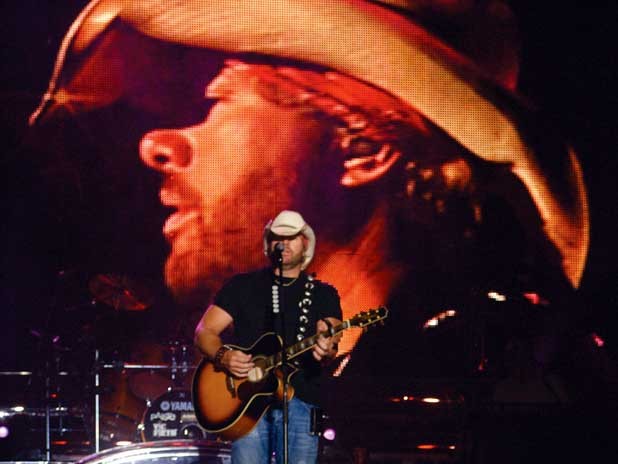 I know what you're thinking. Why would the music editor for the state's pre-eminent arts rag review a performance by Toby "Shockin' Y'all" Keith? As I wandered the bustling grounds of the Champlain Valley Fair prior to the show last Saturday, I found myself struggling to answer that very question.

From a strictly professional standpoint, it is fair to suggest that a performer of Keith's pop "country" ilk offers little of artistic interest to the typical 7D reader - or writer, I suppose.

And it's been a few years since the burly troubadour's inflammatory "Courtesy of the Red, White and Blue (The Angry American)" assaulted the airwaves in 2002 and inspired a bitter and well-publicized feud with The Dixie Chicks. So the controversy angle - the bread and butter of any self-respecting alt-weekly - is forced at best. Alas, there was hardly a protester to be found amid the fried dough, military recruiters and circus freaks. Too much to choose from, perhaps?

So what would possess me to go? Well, in the words of famed Mount Everest pioneer George Mallory, "Because it's there." That, and I do love a spectacle.

Not surprisingly, the atmosphere inside the arena was electric. After all, the Big Dog is arguably the most popular singer - country or otherwise - in America. You could practically taste the freedom, er, excitement in the air.

Taking my seventh-row-center seat, the man himself greeted me. Or rather, a 50-foot-high silhouetted facsimile, arms crossed and glaring down from beneath a cowboy hat and sunglasses in near comic badass-ness. "Biggest and Baddest Tour 2008, Built Ford Tough" screamed the enormous banner concealing the entire stage.

The lights dimmed and silhouette Toby was replaced by celluloid Keith. An extended Ford commercial, er, trailer for his new movie, Beer for My Horses, enraptured the capacity crowd with Larry the Cable Guy-esque slapstick humor for close to 10 minutes. And then . . .

The screen dropped and pyrotechnic fire consumed the stage. The eruption from the crowd was nearly as loud as the cannons - yes, cannons - that shot confetti hundreds of feet into the air. The "confetti" consisted of fliers advertising a contest to win an '09 F-150 and a chance to go on tour with TK.

The smoke cleared revealing Keith and his 10-piece band atop a stage made to look like the spit-shined chrome grille of an F-150. Did I mention he's sponsored by Ford?

From the opening tune, "She's a Hottie," to the grand finale, "A Little Less Talk and a Lot More Action," Keith played nearly all of his numerous hit singles. Except for one.

The show was ear-splittingly loud and rowdy. A charismatic performer, Keith carries himself with a macho yet boyish charm, not unlike a certain soon-to-be-ex-president. To borrow a phrase from Waylon Jennings - a true country-music badass - he's just a good ol' boy. But for all his chest-thumpin', pelvis-thrustin' bravado (even during his few love songs), his set was curiously devoid of the tough-guy patriotism that has become his calling card.

As I sat through one raucous bar song after another, it dawned on me that the real reason I went to the show was to hear "Courtesy of the Red, White and Blue." Call it a morbid curiosity. But this Toby Keith seemed less right-wing firebrand and more overgrown frat boy - though, I would later discover, he is a self-described "conservative Democrat." No kidding.

Anyway, I needn't have worried.

Just as the crowd was reaching a fevered pitch following his finale, Keith re-emerged for an encore clutching his signature flag-emblazoned guitar. Everything from the stage lights to the Jumbotron beamed red, white and/or blue. The singer launched into "American Soldier," an Army recruiting ballad if ever there was one. Following the song, he singled out a uniformed serviceman and brought him onstage to perhaps the largest applause of the night - and rightly so. Meanwhile, Keith's guitarist hackishly began the first notes of Hendrix's "Star Spangled Banner." And then . . .

Fireworks lit up the stage like downtown Baghdad during Shock and Awe - even the soldier flinched. Rockets glared red, bombs burst in air. Cannons fired - real confetti, this time. The Jumbotron displayed grainy images of Ground Zero and U.S. troops in the Middle East. And the Statue of Liberty, presumably, started shakin' her fist. It was glorious. It was absurd. It was . . . nauseating, really.

At the song's conclusion, Keith stepped to the mike. "Never apologize for being patriotic," he growled. And then, holding up a meaty middle finger, "Fuck 'em." The crowd went bonkers.

Driving home in a borrowed, rusty Subaru Outback, my ears still ringing - whether with liberty bells or permanent hearing loss, I'm still not sure - Keith's parting shot stuck with me. He's right, of course, I thought. We shouldn't have to apologize for being patriotic, in whatever form we choose to exhibit it. But what about commercialism masquerading as patriotism?

As Keith himself lyrically points out, "Freedom isn't free." And he's right again. On this night, freedom cost $49.50 and a nominal service fee.