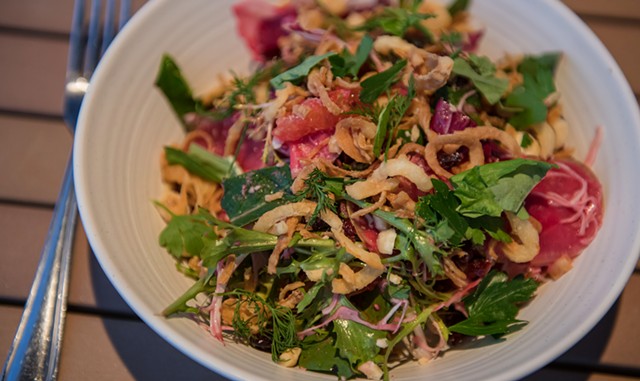 For the April 2014 issue of Met Golfer magazine, 26-year-old Randy Camacho posed in spotless chef whites with a tall toque on his close-shaved head. The Westchester Country Club sous chef was maneuvering microgreens onto a plated salad — with tweezers.

These days, Camacho, now 33, tucks his dark, curly hair into a knit hat and throws on a tie-dye apron. He channels his Dominican roots and culinary skills into the Sup con Gusto takeout dinners he and his wife, Gina Cocchiaro, have cooked almost weekly since September 30 in a rented kitchen space at Richmond Community Kitchen.

Camacho has decisively veered off the fine-dining, country-club circuit.

Camacho is also much happier, he said during a recent interview in the spacious, sunny kitchen of the Richmond farmhouse apartment the couple has rented since June. They moved to Vermont from Philadelphia in January after Cocchiaro landed a nursing job at the University of Vermont Medical Center.

"The only thing I ever wanted to do was pursue cooking professionally." Randy Camacho tweet this

Back in 2014, Camacho was among the youngest sous chefs ever to work at the Rye, N.Y., country club, he said. Despite that achievement, "I hated it," he said. Power inequities and intense kitchen dynamics wore him down. "I had to fight for respect," Camacho said. "One day, I finally grabbed my [knife] case and just walked out.

"I love cooking," he said, "but I wanted to do something for me."

"He's always had a more independent edge," his wife said.

For their new dinner series, the couple pulls from their ancestry (Dominican and Italian), Camacho's Le Cordon Bleu culinary school training, their cookbook collection, and their imaginations.

The Spanish phrase sup con gusto means to eat slowly, with pleasure, they explained. "It's also a play on 'sup, like 'What's up?'" Cocchiaro said.

Sup con Gusto launched with what the couple called "a three-course ode to September in Vermont." It featured a salad of Napa cabbage, radishes, grapes and fennel with apple-mustard vinaigrette and candied pepitas; a main course of gigante beans, squash, tomato, fried capers, garlicky bread crumbs and Parmesan with rosemary focaccia bread; and roasted plums topped with spiced cream and almond crumble.

"I was missing my family and my mom," Camacho said.

The rice technique he learned from his mother, Damaris Rivera, is impeccable, he said; it took him years to even dare attempt it. Cocchiaro recalled a trip to the Dominican Republic for a family wedding. "Someone recognized Randy on the beach and called out, 'Are you Damaris' son? She makes great rice!'"

"I have an affinity for cooking because of my mom," Camacho said. When he started culinary school at 17, he'd already worked a couple of years as a short-order cook at his uncle's bodega in Philadelphia, flipping cheesesteaks and frying chicken wings. "It was always go, go, go. It was high stress, but it was fun," Camacho said. "The only thing I ever wanted to do was pursue cooking professionally."

Although her husband is the professional chef, Cocchiaro has always valued food, too. As a UVM undergrad neuroscience major, she took a food systems course as one of her few electives. "Nursing is a living," Cocchiaro said, looking around the kitchen. "This is life."

Benton Taylor of South Burlington works with Cocchiaro at the hospital and ordered the first Sup con Gusto offering.

"She was always bringing delicious-smelling food into work," Taylor said. The experience was so good that the next time, he ordered enough for four people, including two friends.

A standard order feeds two adults and costs $40 to 45, and a double order costs $75 to $95, not including tax. Sup con Gusto has easily sold out of 30 servings per week. "The price is very good for the quality and amount of food," Taylor said.

Renée Greenlee of Huntington learned about Sup con Gusto via Front Porch Forum and ordered the October 14 meal, which centered on a local sweet corn polenta and choice of braised beef or roasted eggplant, mushroom and fennel.

As a vegetarian, Greenlee added, "I was really curious to see what their take was on vegetarian food. It was, as it turns out, really good." She was especially impressed with the layers of flavor and texture in the greens-and-squash salad with smoked maple-pear vinaigrette and fried leeks, and the pear-and-raspberry almond tart, which was vegan and gluten-free.

The positive reactions to the salads have been particularly unexpected. "People geeking out over salad is heartwarming," Cocchiaro said.

The couple is not vegetarian, but like many people, they're trying to eat less meat and also believe there is an opportunity and a challenge in making delicious, creative vegetarian and vegan food.

For Dominicans, Camacho added with a knowing chuckle, "If there's no meat, it's not a meal."

"Our goal is to find quality, amazing produce and center that," said Cocchiaro. "We're obsessed with beans."

For the first month, the couple made a treasure hunt out of traveling to farmstands for ingredients, including sweet corn, tomatoes and raspberries. They bought chicken directly from Maple Wind Farm and beef from Moultroup Valley Farm, both in Richmond.

They're realizing they need to streamline their sourcing. "We're not big enough for a distributor, but maybe a double-wide CSA?" Cocchiaro mused.

The couple chatted as they tested components of their October 28 menu.

Camacho juggled coarse salt, sugar, beets, foil and baking dishes as he determined the best way to cook the beets for the planned chicory, salt-baked beet, orange and toasted hazelnut salad. "You're witnessing me on the fly," he said with a laugh.

Cocchiaro started making the hibiscus syrup for an apple dessert with whipped coconut cream and candied almonds. They agreed to hold off on testing the main dish of spanakopita filled with local greens, mushrooms and herbs until later. The two worked seamlessly together, offering support and ideas.

When the two met in 2016 via an online dating app, Camacho was not in a good place. "I had stopped cooking professionally. I was working at a nightclub," he said. "I had a bad relationship with alcohol, and I was depressed."

The pair almost didn't connect thanks to Camacho's introductory message to Cocchiaro. "'They call me Randy, but you can call me tonight,'" she recalled with an eye roll. "If you couldn't laugh at that, we couldn't be friends," he said, defending himself with a grin.

But Cocchiaro was serious about finding a partner, so she checked out his profile. "I saw his face, and that worked for me," she said.

At the time, she was a social worker. Among her duties was recruiting participants for a program that organized group runs from a homeless shelter at 5:30 a.m., three days a week.

"That's when I fell in love with her, when I went running with her and that group," Camacho said.

Cocchiaro and her family helped Camacho find a therapist. He credits their support with saving him. "Therapy changed my life," he said. "Then I didn't need alcohol."

But Cocchiaro could see that Camacho wouldn't be happy until he was cooking again.

In 2017, the couple started a pop-up pizza party business called Pizza Hero. They were inspired by Joe Beddia, a cook in Philadelphia who made just 40 pizzas a night in a novel way: one helper, no phone, cash only. His was anointed best pizza in America by Bon Appétit in 2015. "People would wait three hours for his pizza," Cocchiaro said. "I once slept in my car waiting for his pizza."

They schlepped to party locations with tables, a propane-fired pizza oven and all their equipment and ingredients in a Nissan Versa Note. "You know that thing when all those clowns keep coming out the car?" Camacho said.

The pandemic put an end to pizza parties, but the couple transitioned to making takeout in Cocchiaro's parents' home in suburban Philadelphia. When she finished nursing school in September 2020, Cocchiaro applied for jobs all over the country, including Hawaii. But, somehow, she said, she always knew she'd end up back in Vermont.

Camacho got a job in April in the kitchen at Yestermorrow Design/Build School in Waitsfield. "I had my first garden!" he said enthusiastically.

He could have stayed there, but in the fall the couple decided it was time to do their own thing and brainstormed options around Cocchiaro's weekend nursing shifts.

Their home's proximity to one of the few commercial kitchens in the area that rents by the hour helped. Longer term, they hope to buy their own kitchen trailer.

Amy Gifford, cofounder and owner of Richmond Community Kitchen, was happy to fit them in around other renters and the business' own locally sourced, prepared meals schedule.

"They are so full of enthusiasm and joy," Gifford said. "They're a breath of fresh air." Quoting Richmond Community Kitchen sous chef Erin McGuire, Gifford added, "'and their food is so stinkin' good.'"

The original print version of this article was headlined "Gustatory Delights"