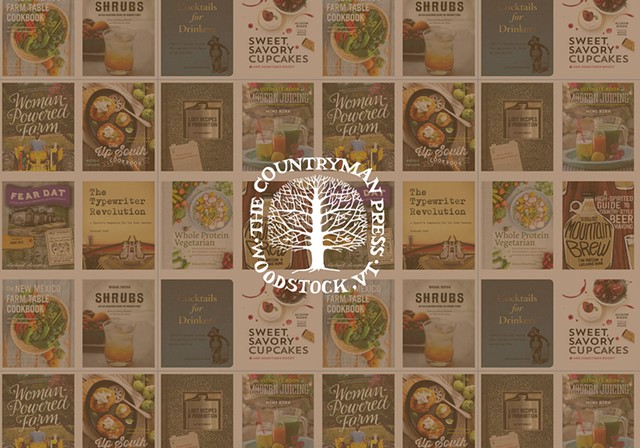 Countryman, founded in 1973 by Peter and Jane Jennison in their farmhouse kitchen in Taftsville, earned its New England cred by putting out high-quality books and field guides about outdoor recreation, travel, gardening, cooking, culture and crafts.

Today, Countryman still promotes its Vermont roots by featuring titles and authors that reflect the values of Yankee self-sufficiency. From its Big Apple address, Countryman publishes about 70 new titles per year, with a backlist of 350 books, covering such subjects as cider making, maple sugaring, fly fishing, wild-edible foraging, meat curing and construction of backyard ice rinks.

"We definitely try and keep that outdoorsy sensibility," says Countryman's editorial director, Ann Treistman, who visits Vermont often — her husband hails from South Royalton. The company built its name on Vermont-y topics, and, Treistman says, "We're totally still doing it. Everyone wants to do that stuff these days."

Treistman says she doesn't expect readers to notice many substantive changes resulting from the move, because the company has maintained its long-term relationships with Vermont-based organizations and authors. Notably, Countryman still publishes cookbooks produced by Norwich-based King Arthur Flour and back titles from Shelburne-based EatingWell. However, the latter company hasn't published a new cookbook with Countryman since 2011, says editor-in-chief Jessie Price. That was also the year the EatingWell Media Group was purchased by the Meredith Corp., which had a previous relationship with W. W. Norton's competitor, Houghton Mifflin Harcourt.

In recent years, the rise of internet-based alternatives has flattened sales of some of Countryman's international travel guides, long a company mainstay. However, Treistman says sales of its domestic travel guides remain strong, as do those of books with high aesthetic appeal.

"In this day and age, people want books that are more objects," she says. "If you can't have something gorgeous in your hands, why not just look it up [online]?"

Lee, who worked for Countryman for about 21 years and now has a job in Brattleboro, says he wonders how well the company will be able to retain its connections with Vermont authors. In particular, he suggests that Norton has lost the "ear-to-the-ground knowledge" needed to maintain travel and craft books, which require frequent revisions.

Sacks Warhol, who worked at Countryman from 2008 to September 2014 and still lives in Bethel — now freelance copyediting for several Boston-based publishers — also questions whether the company remains committed to maintaining its backlist titles. She cites books such as Rink Mann's Backyard Sugarin': A Complete How-to Guide, originally published in 1976 (fourth edition due in January 2016), as the sort that helped Countryman Press build its reputation; now, she suggests, those books may not be updated as frequently.

"The Vermont-centric books we did, I don't imagine they'll be doing anymore," Sacks Warhol says, "which is really unfortunate."

Yeager, who was with Countryman for about seven years and lives in Woodstock, says the company notified all three employees in the summer of 2014 that they would be laid off in September. He and Lee stayed until March 2015 to finish some final assignments. Yeager says the layoffs and office closure came as a total surprise to all three of them.

"It was pretty shocking, because W. W. Norton is an employee-owned company," he says. "We certainly didn't expect it."

Yeager also suggests that Countryman Press loses something by not having a physical presence in the Green Mountains.

"Countryman did focus on regional books, and I think you'll largely lose that part," he says. "It's just an imprint now, a brand name."

Indeed, that branding — books sold under the Countryman Press name still feature a logo of a tree and the company's original "Woodstock, VT" address — could land the publishing giant in hot water. According to the Vermont attorney general's office, a 2006 rule included in the Vermont Consumer Protection Act specifically prohibits a company from marketing itself with a Vermont address unless it performs "substantial functions" within the state. As Countryman's operations are now based entirely in Norton's Fifth Avenue headquarters, its claim to being a "Vermont-based" company could be deemed fraudulent, suggests assistant AG Naomi Sheffield, who emphasizes that she hasn't specifically researched the company or received a consumer complaint.

In recent years, the AG's office has enforced the Vermont Origin Rule primarily on food-related products claiming Vermont origins. In January 2014, for example, VerMints, a company founded in Bellows Falls whose mints are actually produced in Canada, was fined $65,000.

Similarly, a 2008 settlement with Bove's of Vermont, which had relocated its production facility to Rochester, N.Y., resulted in a $5,000 fine and a $50,000 company donation to the Vermont Foodbank for misleading marketing. (Earlier this month, Bove's announced plans to open a Vermont-based sauce plant in Milton.)

For her part, Countryman's Treistman says she was unaware of the Vermont origin law. Norton plans to revise the Countryman Press website shortly, she adds; currently, its "affiliate publishers" site still claims that Countryman "retains its own identity with editorial and production offices in Woodstock, Vermont."