Counterpoint Sings Through the Seasons 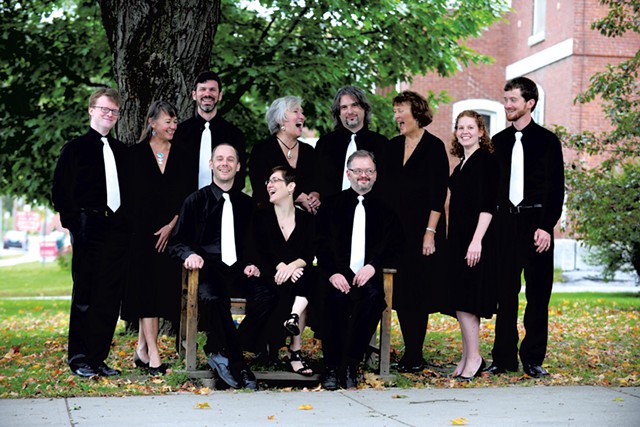 Nathaniel Lew began a recent rehearsal of Counterpoint, Vermont's sole professional choir, with some quick group stretches and a directive. "Since it's so hot, let's start with the winter songs," the director said. The 20-member group was practicing in an upstairs room in the Monteverdi Music School in Montpelier, with only one small fan to cool them off.

Singing about snow is one way to beat the heat. Lew, however, had all the seasons in mind when he crafted the program the group was rehearsing. Counterpoint will perform "Seasons: A Choral Celebration of the Changing Year" this weekend in Stowe, Weston and East Hardwick, with an open rehearsal in Burlington.

The four-part program — ordered summer, fall, winter and spring — is built around Argentinian composer Astor Piazzolla's four tangos, each named for a season in the country's capital city. "Summer in Buenos Aires," arranged for a cappella choir, was already in Counterpoint's repertoire, said Lew. The other three were written with piano accompaniment. Wanting to perform all of what he called Piazzolla's "answer to Vivaldi's Four Seasons," the director departed from the group's usual a cappella style and added accompanist Alison Cerutti to the program. She'll also play two piano solos.

Lew then searched for songs to round out each season. Mindful of Counterpoint's mission of performing in Vermont — the group gives 15 to 20 concerts around the state each year — he identified works by Vermonters that fit the bill. On the program are Sara Doncaster's "Early Summer Morning," and "Summer" by Erik Nielsen; Peter Hamlin's "The Lake House in Autumn"; "A Winter Ride" by Kevin Quigley, who sings bass in Counterpoint; and, for spring, "Maple and Mud" by Carol Wood, based on a poem by her husband, John Wood.

While Counterpoint's former director, Robert De Cormier, favored folk songs, Lew, who took over in 2011, has selected a few American Songbook-type tunes for the concert. "Spring Is Here" comes from Rodgers and Hart's 1938 Broadway musical I Married an Angel. And the unofficial state song, "Moonlight in Vermont," introduces the program, in part because the song's lyrics cover three seasons. John Blackburn wrote its verses as three haiku — a strange, or perhaps brave, choice in 1944 — about fall, winter and summer, with a bridge section on telegraph cables. "He very cleverly skipped over mud season," Lew quipped.

Lew joined Counterpoint as a tenor in 2003, within six months of his arrival in Vermont. As director, he seemed more of a collaborator during rehearsal. A fast talker to begin with, he and his professional cohorts collectively nailed down details with unusual speed for a choral rehearsal.

Nevertheless, fellow tenors Adam Hall and Cameron Steinmetz in the back row still found time to clown around. ("You get those two together, and it's like fourth grade again," Lew joked.) During Quigley's challenging "A Winter Ride," which includes a section calling for audible breaths, they elbowed each other. The Hartford composer, Hall explained, had notated the exhalations and inhalations with the syllables "tchu" and "ah."

"We think that looks like a sneeze — "ah-tchu!" — so we do sneezings. We're just giving [Quigley] a hard time," said Hall with a chuckle. "But actually, I think he's a fantastic composer. 'A Winter Ride' is modern; you get to the end, and suddenly there's this tonic triad you're not even expecting."

Hall, who was developing a promising national solo career until 2012 when family medical conditions claimed his attention, is equally excited to sing Brookfield composer Nielsen's work. He sang the lead tenor in Nielsen's opera A Fleeting Animal last September.

"To me, the human voice is so fun, so incredibly versatile," said Hall. "Just passing things back and forth with our voices is fun." For audiences, fun will be key for enjoying visions of winter, fall and spring in the middle of summer.