Counterpoint, All Mixed Up! Counterpoint Sings the Music of Pete Seeger 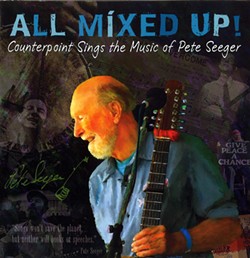 Pete Seeger was a man of many passions and principles. While the late folk-music icon was perhaps best known for the populist messages in his now canonical music, one of his core beliefs was that people should sing together, in large groups and as often as possible. Chorus singing, he believed, was not meant solely for the church or school, but could be an uplifting and communal experience for anyone. Asked his purpose in life in 1946, Seeger responded, "Make singing a labor movement ... I was hoping to have hundreds, thousands, tens of thousands of union choruses. Just as every church has a choir, why not every union a chorus?"

It's likely, then, that Seeger, who died in 2014 at age 94, would appreciate All Mixed Up! Counterpoint Sings the Music of Pete Seeger, by local chorus Counterpoint. Under the steady hand of director Nathaniel Lew and inspired by the vision — not to mention the arrangements — of founding director Robert De Cormier, the choir adapts many of the songwriter's most beloved songs into choral pieces.

De Cormier is one of the most accomplished and respected choral directors in the country. He was also a friend of Seeger and sang with his People's Artists chorus in the late 1940s. If ever a person were uniquely qualified to spearhead such a project, it's him. For All Mixed Up!, De Cormier strikes a fine balance between taking advantage of his chorus' elite ability and, as importantly, translating Seeger's music into works that almost anyone could sing.

De Cormier's arrangements are alternately elegant and rousing. His take on "Where Have All the Flowers Gone" is elegiac and every bit as delicate as those missing petals. "This Land Is Your Land," which uses three of Woody Guthrie's original six verses, including two that were reintroduced to the public by Seeger, is spirited and inspirational. "Turn! Turn! Turn!" swells and sways like a pastoral hymn. Closer "If I Had a Hammer (The Hammer Song)" is gusty and exultant.

De Cormier doesn't just stick to the hits. Many of the album's 18 cuts are pulled from deeper in the Seeger catalog, such as "Who Killed Norma Jean?" "Sailing Down My Golden River" and "To My Old Brown Earth," among others. The liner notes include commentary, usually taken from Seeger's own writings, for each song. Those tidbits alone are worth the price of the album.

All Mixed Up! is a unique and loving tribute to Seeger. What's more, it may just make you rise up and sing out, which is really all the man ever wanted.

All Mixed Up! Counterpoint Sings the Music of Pete Seeger is available at iTunes.