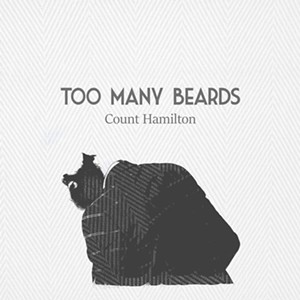 From the farthest reaches of outer space come Count Hamilton. They have braved interstellar travel for one reason and one reason alone: to talk to you about beards.

You heard me. The band's new release, Too Many Beards, is a concept album about beards. And, dare I say, it's about time. Vermont has beards everywhere: beards on the mountain, beards on the streets, beards on ladies, beards on dogs — I've seen it, trust me. Thankfully, Count Hamilton are here to take on the subject with the necessary gravity.

Composed of Alex Vitzthum on vocals, bass and keys; Lucas Hamilton on drums and percussion; and Gabe Allen on guitar, Count Hamilton are just the latest iteration of Vitzthum's menagerie of oddball projects. In 2017, under the moniker Clam, the opera-trained singer/composer released Sonnendruck, a fusion of electro-pop and a cappella vocal stylings. A year later, he went in on feel-good indie rock as Homeboy Aurelio before founding Count Hamilton.

Too Many Beards opens with a wash of static, followed by a sonic montage of different beard-centric sound clips. We hear a voice, as if over a radio, declaring that Jesus was the most recognizable bearded man before the song takes on a frantic, Devo-esque energy. "There's no such thing as too many beards," Vitzthum sings in a slightly deranged tone.

The dissonance of the title track gives way to a sunny, synth-driven jaunt, "Up Too Late." If you took an LCD Soundsystem song and mixed it with a Beach Boys-on-mescaline vibe, you would be getting close to the specific sort of weird achieved here.

Vitzthum continues his broader trend of sonically branching out. This time around, he incorporates hip-hop, as on "Flibbed feat. Yung Scruff," a rap about rolling joints, magic gnomes and, of course, beards.

Throughout the record, the listener is treated to dialogue between band members commenting on and laughing at their own ridiculousness. The effect is similar to when comedians break character mid-sketch: You either love it or hate it. As it stands, I love it. The album holds a sketch-comedy-via-Captain Beefheart feel, including a diatribe about putting kimchi on clam chowder.

Too Many Beards is at its strongest when leaning into indie rock, such as on "Air Balloon." The breeziness of the songwriting, the crispness of Allen's guitar and Vitzthum's highly malleable voice soaring over jazz-tinged chord progressions create such a distinct sound. It would be a signature trait if this were almost any other band. Count Hamilton seem intent on exploring the outer boundaries of pop writing, though.

While they're doing that, they'll keep pontificating about beards and whether there are too many. (Spoiler: Their answer is that there can never be too many beards.)

So, go on, download this weird-ass concept record about facial hair. No, seriously. It's one hell of a listen.

Too Many Beards is available at counthamilton.bandcamp.com.