Could She Win? Evaluating Hallquist’s Chances for Victory 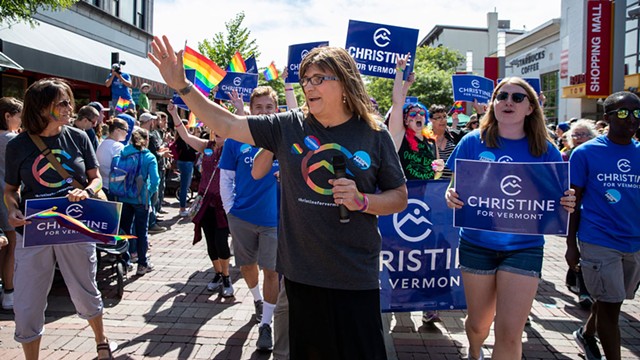 Christine Hallquist, the Democratic candidate for governor, has a lot going against her. The former utility executive is a first-time candidate. She formally launched her campaign in April, which is very late in the game. She was little known outside her stomping grounds in northern Vermont. She's challenging a popular incumbent, Republican Gov. Phil Scott, in a state that hasn't rejected a first-term incumbent governor since 1962. And Scott, in his 18 years in public life, has never lost an election.

No surprise, then, that Hallquist is universally seen as the underdog. Many observers (including some Democrats) have written her off. The state party is putting a lot of energy into winning a veto-proof majority in the House — an implicit acknowledgment that the Dems expect to face Scott and his hyperactive veto pen in 2019.

But could she win? And if so, how?

Yes, she could. But the path to victory is narrow and unforgiving. Even the most optimistic supporters acknowledge it's a long shot. "She's gotta do everything right to make it happen," said Terje Anderson, chair of the Vermont Democratic Party, who gives Hallquist "about a one-third chance" of winning.

And that's the good news.

The biggest single factor in Hallquist's favor is the likelihood of a blue wave — an unstoppable flow of motivated liberal voters across the country and in Vermont. That rising tide could lift Hallquist's boat to safe harbor. High Democratic turnout is widely expected, but the size of the wave is a matter of speculation.

The August primary, which drew more voters than expected, was a sign that the electorate is engaged. And early voting is off to a strong start. As of Monday, more than 25,000 Vermonters had requested an advance ballot — and more than 11,000 have already voted.

"Based on the primary and what we're seeing now, it appears that folks are energized," said Secretary of State Jim Condos. He expects early voting totals to far exceed those of 2014, our most recent nonpresidential election. He added that 480,000 people are registered to vote in Vermont, an all-time high. Registration will continue through Election Day, so that number will continue to climb. (People can check their status and register online through the Secretary of State's website.)

To win, Hallquist not only needs high Democratic enthusiasm — she needs depressed Republican turnout. Scott has alienated many conservatives due to his support for new gun laws and limited marijuana legalization and his frequent, if tempered, criticism of President Donald Trump. Every discouraged Republican voter who opts out of the November election is effectively one more vote for Hallquist.

On the other hand, Scott is likely to get significant Democratic support because he signed those gun bills. "We have to get Democrats and Progressives who like Phil Scott to take another look," said Tim Jerman, a former state representative who's now one of the state party's delegates to the Democratic National Committee.

Hallquist began her campaign with a massive disadvantage in name recognition. That has moderated somewhat, but more work remains to be done.

"We need to spread the message that it's doable," said Jerman. "She needs to reach as many people as she can."

The best way to do that? Television. "It'd be great if we could get on TV to increase her name recognition," said Anderson.

Problem is, Hallquist has nowhere near enough money for a meaningful TV ad buy. Her latest campaign finance report, filed on Monday, shows that she has roughly $63,000 in cash on hand. And as her campaign manager, Cameron Russell, said in this space last week: "To be effective on TV, you're talking hundreds of thousands of dollars."

Scott is ramping up his TV presence. On October 12 he made a $100,000 ad buy, his first of the campaign season. And A Stronger Vermont, the Republican Governors Association's super PAC, just spent $70,000 for pro-Scott advertising. Hallquist, meanwhile, recently spent $20,000 for online ads. Matt Dickinson, a political science professor at Middlebury College, said Hallquist needs a deep-pocketed outside group to "dump a bunch of money in the closing days to raise doubts about Scott."

There has been no publicly available polling of the gubernatorial election since before the primary. Polls have been conducted by interest groups and the Scott campaign, but the results remain private. On October 1, the Vermont Democratic Party released a few handpicked results from an internal poll that show Hallquist within striking distance of Scott. But without all the data from that poll, evaluating its accuracy is impossible.

Conclusion: Scott's the favorite, and a lot of things have to break Hallquist's way for her to win. But consider 2014, when everyone was certain that Democratic incumbent Peter Shumlin was going to wipe the floor with Republican challenger Scott Milne. Didn't turn out that way, did it?

Of course, those unexpected moments are so memorable because they are so rare. Conventional wisdom says this will be a fairly easy Scott win. But sometimes things don't turn out the way you expect. Especially in such an unconventional year.

A candidate for Vermont House in Orange County is pursuing an unusual strategy: almost complete invisibility. Republican Christopher Covey, owner of C.C.'s Tree Service, is not spending any money. Nor is he campaigning door-to-door — "It feels intrusive" — and he's shied away from most media requests. "I'm running under the radar," he explained. "I've spent $150 on my campaign. I've received donations from people and sent them back."

Covey is one of four candidates contending for two House seats in the Orange-1 district, which includes six communities: Chelsea, Corinth, Orange, Vershire, Washington and Williamstown. It's a predominantly rural district; as Democratic candidate Carl Demrow noted, "Orange-1 doesn't have a single traffic signal." The other two hopefuls are incumbent Rep. Rodney Graham (R-Williamstown) and Progressive Susan Hatch Davis, who represented the district in the House from 2009 to 2017. She lost her seat in the 2016 election, finishing a mere seven votes behind Rep. Bob Frenier (R-Chelsea).

Frenier isn't seeking a second term, but he is managing Covey's campaign — what little there is to manage. Frenier argued that the no-campaigning campaign is a throwback to the state's political roots. "It's the traditional style of Vermont campaigning and the tradition of people who work with their hands on our lands and forests,' Frenier said. "We need more people like that."

Burma-Shave-style roadside signs, a sequence of placards delivering a message, provide the only visible evidence of Covey's candidacy. "I call it Vermont Twitter," said Frenier. One example, as reported by the Barre-Montpelier Times Argus: "Under the Vermont government/ Bureaucracy is like a well-manured garden/ That never gets weeded."

Covey calls himself "a constitutionalist" who believes that some freedoms have been "trampled" this year — particularly by the new gun restrictions that became law following what authorities called a foiled mass shooting plot at Fair Haven Union High School in February. Not only does Covey believe that some of the new laws are unconstitutional, he also argues that Jack Sawyer, the teenager who drew up detailed plans for the shooting, "was exercising freedom of speech. He didn't commit a crime."

Graham, a more conventional sort of conservative, is seeking a third term in the House. "I've still got things to do," he said. "I definitely didn't want to leave the district without an incumbent." His priorities, he said, are keeping taxes down, opposing further restrictions on guns and making health care more affordable. And he wants to prevent Democrats from winning a supermajority. "We need to do that, or pretty much not bother going [to the Statehouse]," he said.

Demrow is a self-employed carpenter and construction worker from Corinth, and a first-time candidate. He brings a rural perspective to the Democratic agenda. "Pocketbook issues are No. 1," he said of a district with many people struggling to make ends meet. He supports worker safety and the right to organize, strong public schools, and "a roadmap to universal health care," he said. "The things that help people get out of poverty."

It might seem a foregone conclusion that Davis would seek to return to Montpelier, but she said that she didn't make up her mind until the spring. "A group of young people contacted me and wanted to organize my campaign," Davis said. "They felt they were underrepresented in the Statehouse. We met three or four times, and I said I'd run."

The four-candidate race presents contrasting visions of rural Vermont's needs. The Republicans' agenda could be summed up as "Cut my taxes and leave me alone." Davis and Demrow support an activist state government that can provide help to rural communities that can't fend for themselves.

Democrats are confident about Davis and hope Demrow's hard work will pay off. For Republicans to retain both seats, the voters will have to respond to Covey's unconventional strategy.

"We'll see if people respect [Covey's low-budget] campaign," Frenier said. "If people think he should spend money and take time away from his business, he won't do well."

If so, Republicans will be one seat closer to losing their ability to uphold gubernatorial vetoes.

It's the end of an era for two Burlington radio stations. WVMT-AM, the talk station featuring "Charlie + Ernie in the Morning," and WXXX-FM, which plays the hits, are being sold to Vox AM/FM, whose properties include WEZF-FM (Star 92.9), sports talker WCPV-FM and WXZO-FM (Hot 96.7).

WVMT has been in the Goldman family since 1962. Current owner Paul Goldman is selling reluctantly. "I love what I do and would do it forever, but I can't," he said. "My way of doing business is no longer sustainable."

That's because the radio industry is in decline. "Our ad rates are lower now than they were five years ago," Goldman said. When a company owns several properties in a market, he added, "there are economies of scale."

For years, Goldman has turned down offers from large out-of-state broadcasters. Selling to Colchester-based Vox, he said, is "the best way to ensure the future of the stations."

Disclosure: John Walters can be heard on "Charlie + Ernie in the Morning" every Wednesday at 8:10 a.m. He is not compensated for his participation.